Happy Folklore Thursday! Pre-orders are coming in spits and spots, but it's possible that a way to smooth our way forward may be found – watch this space for updates, but all those of you who share our passion for getting this roadmap of tales into shops, and into your hands, will have your kindnesses rewarded! In the meantime, any scheme that occurs to anyone out there to spread the word and get more folk to join our merrie band of 246, would be very welcome indeed!

Given today's arboreal theme, we've already shared THE APPLE TREE MAN, and the remaining tale out of 77 with 'Tree' in the title is one we were thinking of keeping secret until release... but THE WHIKEY TREE is a crucial, and very weird, entry in our Contents list, and raises the issue of Parental Guidance warnings for some of these tales.

We want the book to appeal to the widest audience possible, without any age being ruthlessly targeted, and it's a fine line between cruelly bowdlerising tales which can be bawdy, gory or otherwise naughty, and finding the best way to keep all of that juicy stuff intact. So we have The Miller telling his tale on the road to Canterbury, we have Vikings tearing the heads off their enemies and decorating their saddles with them, we have Janet debating whether to keep Tam Lin's child... and we have the story of the great Robert Henryson's last laugh on this planet.

The trailer above, for Seamus Heaney's adaptations of Henryson's adaptations of Aesop's fables, brought to life by Billy Connolly, is how we first became aware of the Scottish storyteller's existence, as I'm sure it was for many folk. That 'The Whikey Tree' celebrates a largely forgotten storyteller is one of the key reasons for including it in Tales of Britain, and none of Henryson's own stories (which tended to be fables, bar one stab at Troilus & Cressida). However, this yarn is a little more NSFW than any of the above. 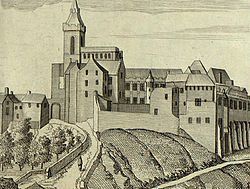 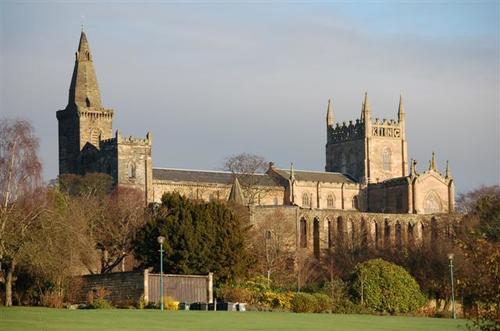 Dunfermline Abbey, the neighbourhood where the scatalogical events of 'The Whikey Tree' took place.

'The Whikey Tree' purports to relate Henryson's final moments, as he lay dying of flux – dysentery – in the winter of 1500, at Dunfermline. Having received no benefits from taking every kind of medicine then available, and expecting the end, Henryson was annoyed to be visited by a crazy fan of his tales, a self-appointed wise woman, the medieval equivalent of a homeopathic alternative therapist, who told him that if he walked round the old tree at the end of his garden shouting 'Whikey Tree, Whikey Tree, take this flux away from me!' he would be cured. As he could barely lift his head at that point, his rejoinder to the unwelcome visitor was that doing something so stupid would be as useful as if he climbed onto his bedside table and shouted 'Oaken board, oaken board...' well, maybe you can make it out in the picture below. 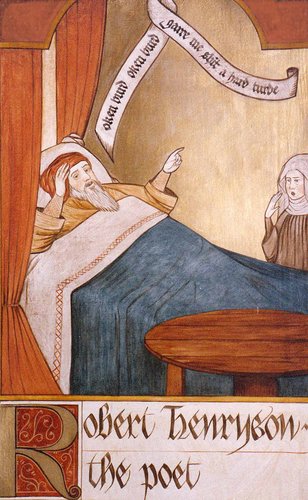 'Turd' seems pretty straightforward, but the verb is still up for discussion – though it will certainly not be the Americanism 'poop'. Harry Potter, of course, throws in 'bugger' without any eyelid-batting, and there's a grand history of family literature embracing the scatalogical and the crude, and nowhere should that be more celebrated than in this collection of our national lore. These tales are made to be shared, above all, and so as with any other medium, we're working on a clear indication if any tale contains material in the PG-13 area, and judgement can then be made on the best context for sharing any tale.

So, Sunday teatime is perhaps not the ideal arena for reciting Robert Henryson's last words, it could put you right off your Dundee cake. But we're chuffed to feel we're keeping this great storyteller's last laugh alive, in the 21st century. 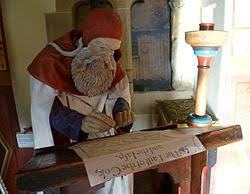