A very happy versifying Folktale Thursday to you all!

First of all, do respond – jem@jemroberts.com – if you fancy a special Scottish storytelling session in Edinburgh this August 24th! Also, have you reviewed the book yet online...? Please do when you get a moment! Now, to the theme...

Rhymes play a part in so many of our 77 tales, it's hard to pick out just one, so how about we share a missing ingredient of the book which was jettisoned quite early on in the publishing process – the RHYMES? 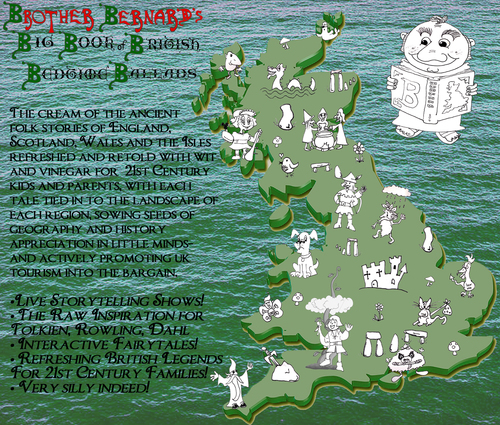 As a small person, Rupert annuals were an ever-present part of my reading material, but I always preferred the shorter rhyming summary of each plot to the actual prose itself, and that's what inspired the idea of including a poetic summary of each tale at the beginning and end of each story text. The fact that Tales of Britain was originally entitled 'Brother Bernard's Big Book of British Bedtime Ballads' may have played a part in including verse, too.

So, deleted as they all were, here's a selection of short rhymes from our collection. Okay, so they're simple doggerel, but feel free to scribble them back into your copies… or perhaps rhymes will be worth including in any future deluxe edition...?

THE APPLE TREE MAN:
‘I picked an apple from that tree – I swear that it just spoke to me!

‘So drink up thy cider and wassail with pride, There’ll be apples aplenty by harvest-tide!’

AVALON:
‘Glastonbury’s mystic hill, Or is it the Isle of Apples still?’

‘When Britons all cry out in pain, King Arthur shall return again!’ 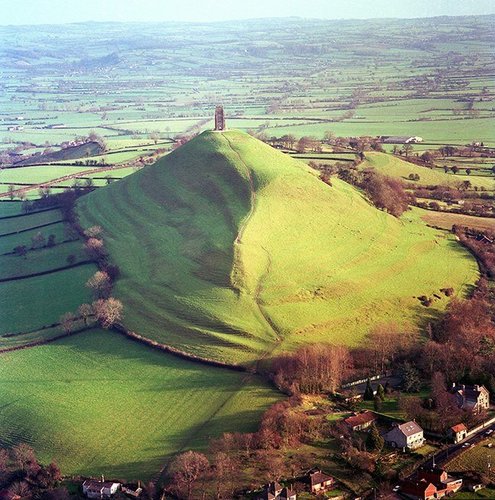 BABES IN THE WOOD:
‘Two tiny tots trot through the wood, Will they meet up with Robin Hood?’

‘Remember the babes, and mind how you go. If a stranger says, “Follow me!” You just say “NO!”’

BEWARE THE CAT:
‘Can it be done, and if so how? To understand a cat’s meow?’

‘Off Steamer runs through the streets so foggy. Serves him right – he scoffed a moggy!’

‘That’s what happens when you live to annoy – A warning for every girl and boy.’

BLADUD & THE PIGS:
‘If you are spotty, there’s no need to whine, It’s time to get grotty, so swim with the swine!’

‘Spots or swineherding – no matter what your troubles, So much can be put right by a warm soak amongst the bubbles!’

BRAN THE BLESSED:
‘A sad tale of a mighty man! Up from the depths, here comes King Bran!’

‘Some say that Bran is still not dead, He knew just how to stay ahead!’

THE BROWN BEAR OF THE GREEN GLEN:
‘Now this may sound a little weird, Who would have thought? An eagle who’s eared!’

‘With that, the old tinker drowned the dregs from his cup, “That’s all I can recall!” he grinned, with a cheeky hiccup.’ 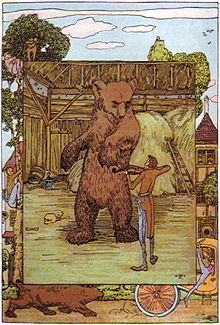 BRUTUS: LAND AHOY!:
‘White cliffs hove into our view, What is this land? Give us a clue…’

‘We tell the truth in ways that suit us, Who knows the truth of this tale of Brutus?’

THE BUGGANE OF ST TRINIAN'S:
'They’ve built another church again? There’s nothing else for it – begin the Buggane!'

‘The clever tailor found romance, And saved the day, thanks to his fast pants!’

THE CANTERBURY TALES:
‘A whole book in one tale? It fits! But this is just the funny bits.’

‘We loved those tales, though some were coarser, To read the whole thing, brush up your Chaucer!’

DICK WHITTINGTON:
‘The streets of London paved with gold? That’s a tale that won’t get old...’

‘Dick was the mayor of all the city… And all thanks to that clever kitty!’

ELIDOR & THE GOLDEN BALL:
‘No wonder Elidor’s so flustered! How he missed his tasty custard!’

‘Put your ear close to the ground, And hear – kick! Whistle! A cheering sound!’

THE EYE OF LEWIS:
‘Brave and clever, and defiant, What happened to the final giant?’

‘You won’t find giants in Britain today, If only they could have been nicer, eh?’

THE FAIRY INVASION:
‘The island of Guernsey’s a curious place, The home of a partially magical race?’

‘The fairy blood on Guernsey lingers, Be careful of their magic fingers!’

‘When trouble arises, Gawain heard the call – A Merry Winter Solstice to one and all!’

THE GIFT HORSE:
‘Receive a free horse, you're in for a shock, The proof is in Jersey, if you find the rock.’

‘Mistletoe is a magic berry, Now Willy and Anne-Marie are merry!’

THE GREAT GORMULA:
'Witches are evil, folk assume, But here comes Gormula on her broom!’

‘To save the country, she had a formula – Let’s hear three cheers for The Great Gormula!’

THE HEDLEY KOW:
‘Help the poor and don’t be snooty, Even if they’ve found some booty!’

‘Call her stupid, call her funny, But a merry mind’s worth more than money.’ 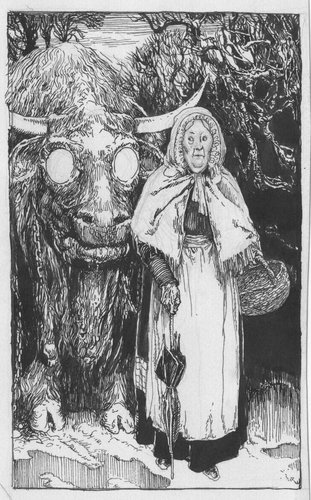 HERNE THE HUNTER:
‘King or serf, pay heed to Herne – There is a lesson here to learn.’

‘The curse of Urswick’s point was clear: Spare the poor pheasant, and don’t murder deer.’

JACK & THE BEANSTALK:
‘Fe fi fo fum? You know what that means, Such a fuss over a hill of beans!’

… Which seems a fitting place to end this there.