A heroic Folklore Thursday to you all, and to pledgers especially!

If you will forgive your author’s unusual stepping out from underneath Brother Bernard’s green velvet cowl, this is a rather tricky and sensitive blog which has been in the offing for quite a while, but how to go about it? Rather than focussing on one British folktale, today we’re celebrating one British HERO – Python, movie director, historian, humanitarian, journalist, poet and mainly, for our purposes, glorious storyteller, TERRY JONES! 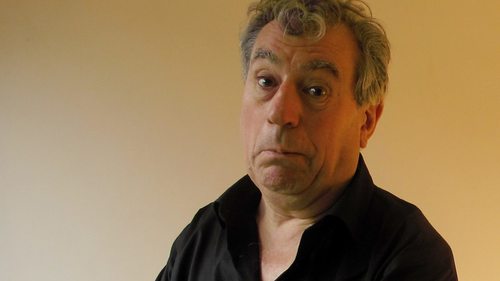 From our very first blog in the summer of 2017, we have stressed the influence of a few key storytellers in our approach to our folklore: Rik Mayall’s Grim Tales, as adapted by Anthony Horowitz, is paramount – many of our tales were pretty specifically written for Rik’s naughty brand of anarchic yarn-spinning, and at one point, months before we lost him forever, ‘Approach Rik’s agent with Tales of Britain TV idea’ was at the top of our to-do list. The exciting mythology retellings of our patron Sir Tony Robinson were also a huge inspiration, and of course the magical weave of Anthony Minghella’s writing for Jim Henson’s The Storyteller. But Terry’s tale-telling has a different, more personal relevance to this book which we’re all keenly waiting for Unbound to send our way.

I first met the loquacious, passionate Welsh Python circa 2010, as an early port of call when researching my second book, The True History of the Black Adder. Nobody filled such an authoritative chair at the juncture of History and Comedy as the man who co-directed ‘Holy Grail’, directed ‘Erik the Viking’ and wrote ‘Who Murdered Chaucer?’ Although he admitted that he knew little about Blackadder, he theorised and philosophised with me about funny history as his tiny baby daughter Siri crawled across the carpet, then he took me for a few pints of real ale (it was real, I drank it to make sure), and was generally hospitality itself.

Of course, as a fledgling comedy historian, no matter how friendly Terry was, I knew the great man was just being lovely, and very early on I developed a strong concern that his niceness was exactly the kind of rare celebrity virtue that endless folk must have taken advantage of, for many years, and his natural courtesy and kindness allowed all sorts of liberties to be taken. 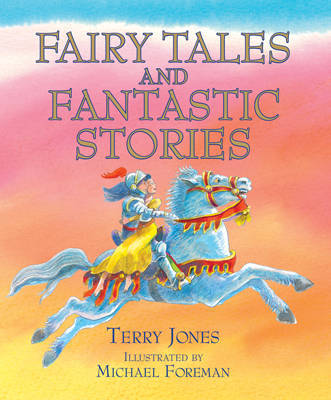 As you can see from this 2014 article, Terry's original inspiration for his celebrated Fairy Tales was not dissimilar to our own motives here – dismay that the existing lore was not fit for purpose, to be told to 21st century kids. Whereas we have taken that as a cue to delving back into a folktale's oldest roots, and finding a way to reshape the narrative into a fresh form, Jonesy simply began telling his own fairy tales, fit for his daughter to enjoy.

The mystical and silly short stories which resulted from this rash of composition were a childhood favourite of ours back in the 1980s, and they were further enhanced on adaptation to telly, with the help of Terry's old friend, Python/Rutles/Bonzo maestro Neil Innes, who was also entrancing my generation with Puddle Lane. The resultant programme, East of the Moon, linked above, more than deserves a loving DVD/BluRay release by now... 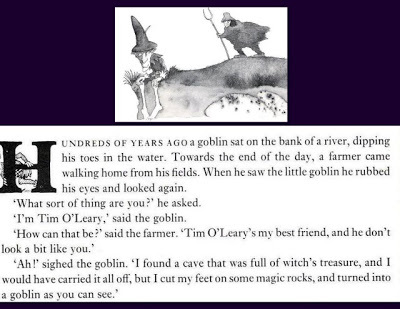 But knowing how Terry felt about storytelling, and loving his folkloric style, I had a dearly held request to make, despite my misgivings about his niceness making any request feel like an imposition. The thing is, back in the early days of Tales of Britain, I was so INCENSED by the fact that no proper anthology of British folktales existed that I felt it was a campaign many other famed British writers for younger readers would be equally keen to promote. I honestly felt that if, say – and let's go right to the top – Jo Rowling, David Walliams, Phillip Pullman and so on realised that the only option for a holistic collection from these islands was to spend hundreds of pounds on leather-bound folklore collections, that they would want to right that injustice too. And so, why wouldn't they want to join with me to write new versions of local lore from all over Britain? This is why Brother Bernard was summoned up, so a whole host of authors could join together to promote a fresh take on British folklore, all under the same pseudonym.

Of course, sadly I had got nowhere with this plan, despite some of the above names being approached professionally… and yet, I felt, surely Terry would understand, and may just be keen to join me in the project? He and Michael Palin had after all partially inspired Brother Bernard with the creation of their own author, Bert Fegg, and he had repeated the trick with his own 'Lady Cottington's Pressed Fairy Book'. Plus, once again, he had a daughter to write stories for! It seemed within the realms of possibility...

There was an extra reason for being in touch with the great man anyway – Terry was a long-standing patron of the Bath Comedy Festival, and when I suggested to the festival boss the concept of THE BATH PLUG AWARD, what could be more perfect, than showing a couple of the director's films (Holy Grail and, his choice, the wonderful Wind In The Willows) and then I would interview him on stage for a Q&A? Everyone's a winner.

So this was all happily agreed for April 2015. In January of that year I found myself in that London, and so emailed Terry to see if he'd like a pint, and I could discuss Tales of Britain with him. He cordially (of course) invited me to his local, where we were joined by the now 5-year-old Siri and her mother, Terry's partner Anna. All three of them seemed quite sold on my idea for a road atlas of fresh British folktales, each with their own tourist guide, and I promised a copy to Siri one day there and then. Terry, however... was rather quiet throughout. He absolutely echoed my call for a book like this, but ultimately, as a busy chap, he told me, 'I'd love to write a foreword for you if you get it made...'

This was of course not quite what I wanted, and seemed to be exactly the kind of extremely kind offer he was wont to make – I recall he was writing a foreword for someone else's book when I first walked into his study! Don't get me wrong, what an HONOUR! to have a Python offer to write an introduction to Tales of Britain! But yes, I had hoped for a collaborator – and maybe I had aimed too high. 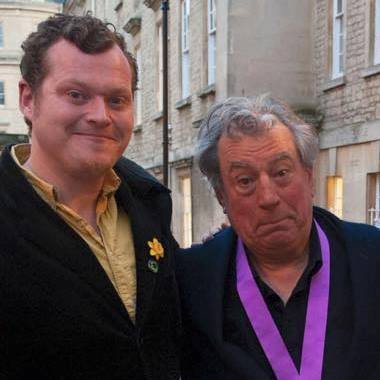 The truly sad part of the story never revealed itself until a week or two before the Bath Plug Award, when Terry emailed me to say, to admit, to opine... that he was not himself. That he didn't think a public Q&A was going to be within his power. All comedy geeks had noted that the dear fellow was by far the least chatty of the Pythons throughout their O2 publicity, happy to let Palin and co take the lead on all questions. But that it was down to the earliest signs of an illness which could never be cured was a horrible thought nobody wanted to entertain. We agreed that Terry's comfort was paramount, and yet, with tickets sold, however, Terry's pluck and kindness inspired him to make an extra-human effort, and the Bath Plug Award presentation went ahead.

It was one of the hardest things I have ever done, steering the beloved comic through a whole hour of on-stage 'banter' (horrific word, but at least when a Python's involved, I can use it), and one or two out in the crowd were less forgiving than others, but we survived the ordeal... and it seems I may very well have been the last person ever to interview Terry Jones, at least in public. That evening, despite my fawning respect for his privacy, he insisted that I dine with him, and he ordered bottle after bottle of extremely good malbec on Bath Comedy Festival funds… as I talked. At him. One of the greatest creators of comedy of the last 50 years, a pent-up fountain of comedy knowledge to whom I could have listened for weeks on end. Stuck on 'listening mode'. So, as I say, I talked at him. I talked and spoke and jawed and said and blethered and protested and explained, all night long – with regular protestations of 'I'm so sorry Terry, I just seem to be talking non-stop', to which he smiled and replied, 'But I like hearing you talk'. Kindness, again? For a poor drunk desperate storyteller? Any which way, having gone into the Tales of Britain project in atomic detail, I eventually sloped up the hill from the Abbey Hotel very worse for wear, and rather hoarse, but confident that one of the world's greatest storytellers was on our side with this crucial campaign...

In 2016 I arranged with John Mitchinson of Unbound that I would bring my next two books – official Fry & Laurie biography Soupy Twists and Tales of Britain (which I had reluctantly had to write all on my lonesome, the manuscript being at least 50 tales strong by this point), to his crowd-funded publisher. By sweet coincidence, Terry Jones was a founding member of Unbound, and his own brilliant Knight & The Squire series was coming to an end on the platform at the time.

But before I could open Tales of Britain up to the public in mid-2017, Terry broke the news. His diagnosis of frontotemporal dementia explained much, but of course only made the whole story sadder than any of us would ever have wanted. And obviously, there was absolutely no question from then on that I would be chasing up any kind of foreword, no matter how sincerely offered back in 2015.

Blessedly, Terry's old friend Neil Innes has passionately taken up the cause, pledging for a book like the rest of you, and becoming a key patron of our campaign:

But rather than ask anything of our hero, as he grabs every day remaining and makes the very most of it, the natural decision was to dedicate the book to the author of Nicobobinus, Erik the Viking, The Fly-By-Night and so many other captivating tales, making it clear from the first page that this all-new celebration of British storytelling was eternally inspired by his own magical fairy-tale-weaving. I've since been in touch with Anna, to update her on the new direction, and everyone at Unbound, and everyone working to make Tales of Britain worthy of this connection, hopes with all our collective hearts that the tribute will be taken with all the love intended.

There will be much talk this Folklore Thursday of Heroes, Greek warriors, Norse Gods, and so on. But for us, today is all about a real hero – both throughout his life of hilarious, cerebral, humanist creativity, and with what he faces today.

Terry Jones is Our Hero.