Good luck to you this Folklore Thursday, TOB-backers! 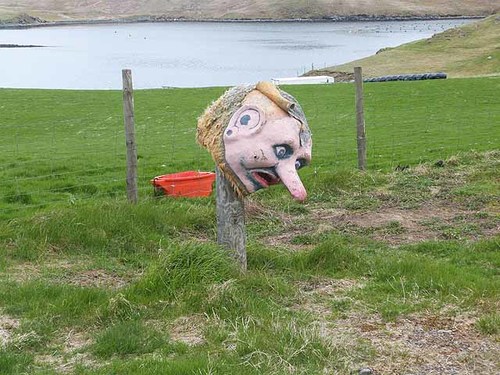 Many folktales could be said to be filled with good luck and bad, fortunes rising and falling, so we've double-themed our tale for this LUCK-LORE Folklore Thursday by focusing on that scourge of the Shetland Isles, LUKKI MINNIE!

There's very very little to go on when it comes to this hideous trow from the far-northerly leas of Far Isle: a few botanical superstitions, and a short and very unoriginal narrative – our source material for the tale comes from that most unlikely of all sources, The New Statesman. A young Fair Isle lad has the extreme BAD LUCK of being kidnapped by a hideous trow, and the ultimate GOOD LUCK of escaping her clutches by leaping over a burn, where she splashes into the foamy water and is washed away – though her 'churning butter' can still be seen on the Fair Isle coast at times... 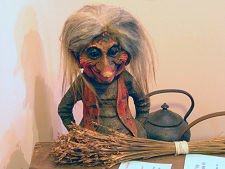 We used this sparse plot as a jumping off point for a story about stories in some ways, having noted that the nasty 'dog in a bag' caper outlined here is a very tired yarn, used many times all over the world, and notably associated with Mollie Whuppie at least once. Therefore, considering that smelly old canard about boys having no interest in female heroes, we made Willie a HUGE FAN of Mollie Whuppie's exploits, and her legendary example is what gives him the idea of escaping Lukki Minnie's clutches with the same bag trick. And so, the folktale becomes a story about the power of stories, and Willie manages to triumph over the evil trow, thanks to his avid reading of folktales.

Oh, and call us wet if you like, but we changed the dog to a truly disgusting bogey, as it's tough to defend any hero chucking a dog in a bag and breaking its bones, so we've saved ourselves the bother. 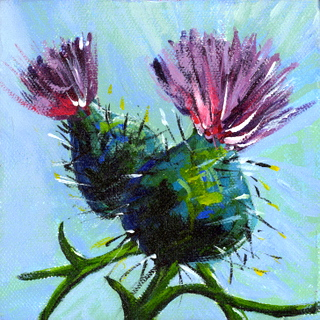 Similarly, with 'trows' being such nebulous monsters – Shetland's position between Scotland and Scandinavia making them very vague translations of Norwegian trolls – we took a few liberties with the nature of Lukki Minnie too, and made her a spiky, sharp thistle-like nightmare with a shock of purple spiky hair which sticks out of her hole, looking very like heather from afar, until she POPS out to grab unsuspecting innocents, and tug them under the ground for her supper. We've still yet to sign up an illustrator for the book, but she's an absolute gift to whoever lands the gig. 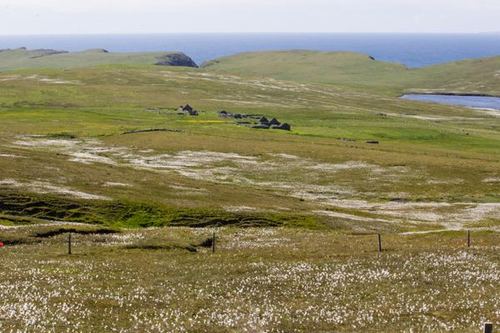 We can't find any pictorial evidence of the froth of Hesti Geo, the legendary result of the hideous trow 'churning her butter', but this Fair Isle cotton grass is also known as 'Lukki Minnie's Oo' (nothing to do with Adventure Time, we presume), so it will have to do!

In truth, it's hard to imagine many tourists making the journey all the way to Fair Isle on the basis of Lukki Minnie's legend, but if anyone out there has been, or lives there, and knows any more about the hideous old purple-haired fiend, let us know!

Oh, and the 300th book pledger will get a story audio reading of their choice! Just tweet us when you've pre-ordered, and remember – beware o'da trows... 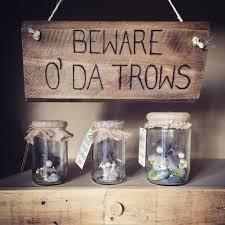