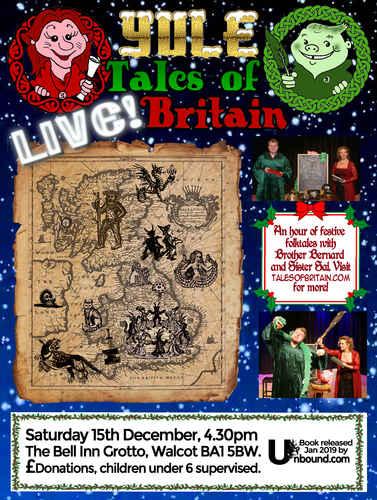 First of all, we can't wait to see as many of your as possible at this year's LIVE YULE SHOW in Bath on Saturday afternoon. There will be one or two traditional yule tales repeated from last year's show, but lots of fresh tales to enjoy too, including our panto-ish rendition of DICK WHITTINGTON! Oh, and free sweets, as ever.

Brother Bernard and Sister Sal have been performing these live shows for over two years, but this will be the very last show WITHOUT BOOKS AVAILABLE TO BUY AND HAVE SIGNED!

Because yes, this very week, very final fixes have been sent off for the manuscript (for instance – the London Stone has always been described as a piece of a Temple dedicated to Diana in the Brutus legend, so we said the same... but now we come to think of it, Diana is the Roman version of Greek God Artemis, and Brutus' story takes place CENTURIES before Rome was even founded, so how can it have been Diana? If the book arrives with 'Artemis' in that story, then we haven't wasted our time this week!), and it's possible that we may have copies even before the 25th – though that seems an insanely quick turnaround at the last minute.

This has been a very long, hard and bumpy road – the genesis of Tales of Britain goes back to circa 2004, when I simply wanted to BUY a collection of British folktales for my first of five nephews... only to find there literally wasn't one, and one hadn't been published since 1988 (with a reprint for that edition in 2001), plus the original leather-bound 1970s academic collections, which cost £100s. But now we can finally unveil the cover, it's hard not to get excited! 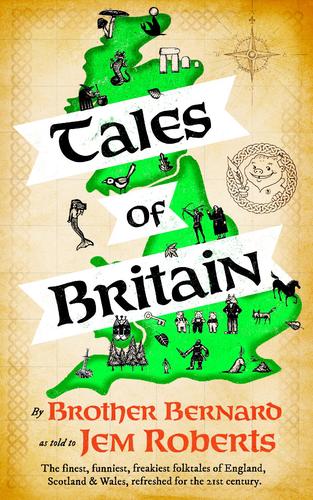 Although, as those of you who have been in on the campaign long-time will know, our reduced budget means that a lot of difficult battles had to be won on this design. But we were very pleased to get all sorts of victories included in this cover: the first draft was packed with worrying misconceptions which we lobbied hard to fix – it needed better gender balance, and a cat, for a start – and above all, we're pleased as pleased can be to have managed to get our official logo on there, as we were worried it wouldn't be included.

We went through all sorts of ideas, at one stage designer Darrell Jones sent across a concept cover on spec which seemed a lovely idea – the chalkhill concept was neat, it would have been great to have had the shape of the British Isles carved into the grass, but Unbound said no. Though you can see, it was a lovely bit of work, and we can't thank Darrell enough for the suggestion. In all honesty, although this is smart, the cover does need to convey the freaky, quirky comedic nature of most of the stories, and the new design does do that very well. 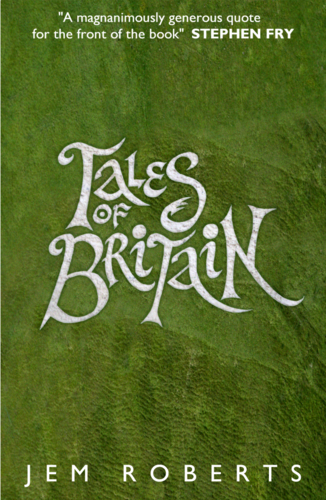 And besides, this is only stage 1 of our international campaign to promote British folktales, stories are still being retold all the time, and there will be further editions, fully illustrated, and hugely broadened, so who knows what the future might hold? For now, this will be the one full British folklore collection available in one volume, all round the world.

Those who haven't already pledged for a copy can buy Tales of Britain online now and of course we'll start organising all the pledge rewards and a great big London launch party once the 12 days of winter solstice are out of the way (maybe early February?). Whether you pledged to have Bernard come and visit you, or to come to Bath to visit the site of Bladud's story with Bernard and Sister Sal, or even to have a tale retold just for you – we look forward to delivering the goods!

But before the stress and activity that January brings, what can we do but revel in the season's pleasures? Chief of which is STORIES – this Saturday, at the Bell Inn, Bath!

Everyone readying this exciting collection of 77 stories wishes everyone who has supported the campaign the very merriest Mithras/Solstice/Saturnalia/Xmas/Winter Solstice/Yule! Let's make 2019 THE YEAR for British folktales! 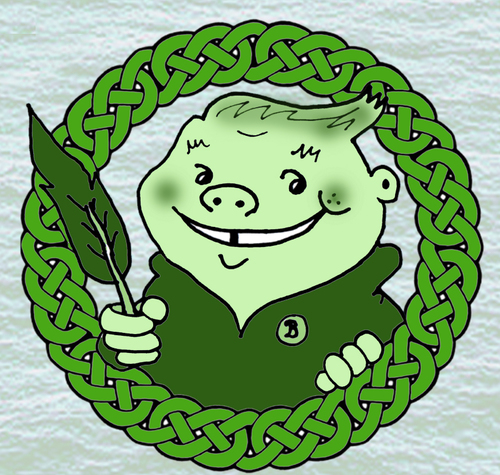