BLOW, WINDS, AND CRACK YOUR CHEEKS!

Here's wishing a clement Folklore Thursdays to all our backers! 40% – let's see how quickly we can get up to the mythical 42%, pledge or get someone to pledge TODAY!

For this terribly British weather-themed Folklore Thursday, we were tempted to visit the Ancholme Valley to become acquainted with The Tiddy Mun, the people's saviours in times of drought... but when it comes to weather and British legends, there can be only one. 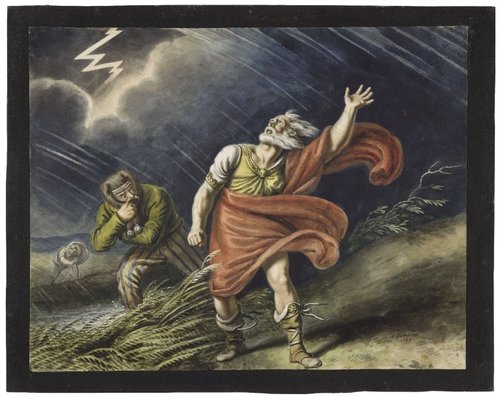 Leicester really isn't the most obvious holiday destination in the UK. It's rare that any TV game show gives competitors the chance of a luxury fortnight in any north midlands city. But when you couple the newly-built historial sepulchre of King Richard III with the mythical resting place of another Shakespearian anti-hero just around the corner, the place should surely be a mecca for any lover of British stories. And today we look at the weather-beaten jewel in our not-necessarily-historical collection of Kings: KING LEIR.

Strange admission from a cynical humanist first: I find it very hard to believe that Leir never existed. The belief that his story was extrapolated from that of some ancient pagan water god, Lir, is particularly fishy to me, as gods are of course all man-made concepts, and if anything, the inspiration for such 'gods' would quite probably have been real people of power. As gods do not exist, all the gods we know of, from Zeus to Yaweh, are more likely to be misunderstandings based on influential figures in far distant antiquity than entirely cooked-up fictional creations. The legend is that Queen Cordeilla laid Leir in a vault 'under the River Soar' (which was once known as 'Leir' itself), and a temple was built above it, being converted to worship of the god Janus by the Romans soon after they staged their UK takeover in the mid-first century. Somewhere in the region of the ruined Jewry Wall in the city centre, a large temple once stood, and somewhere under there, the wisdom has always run, lie the remains of a 9th century BC war lord, who had severe problems with his retirement plans.

And so it seems far more likely to me that Leicester takes its name from an early Celtic ruler, circa 800 BC, and that his life story to some extent corresponded to the story we know, than all this lame water god tot. We know nothing about the origins of 'Lir', so the god could as easily be based on a man, as the other way around. Stories were so often simply the way we humans, Britons or otherwise, remembered things – and still are – and more often than not, the thing being remembered, and endlessly embroidered over centuries, was a real event.

I apologise to any fellow historians whose lives may have been shortened by my logic there, but despite a complete lack of religious or supernatural belief, I do have a certain degree of blind faith in the real origins of the majority of the 77 stories in our collection. Besides, by demoting Leir to mythology alone, you're also negating surely one of our most undervalued figures – his successor, Queen Cordeilla, a warrior Queen predating Boudicca by several centuries, and definitely a 'mythical ruler of Britain' who deserves to be celebrated more, both for her wisdom, and bravery (not to mention her tragic end – look it up...). 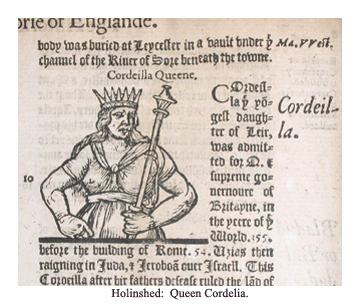 Talking of tragic ends, of course Warwickshire scribbler William Shakespeare's dramatic revamp of the old King Leir play in 1605 is the real reason we all still remember him and his daughters, even though he clearly changed the ending one day while in a very bad mood, skewing the tale forever more, and offing Cordeilla many years too soon.

Full disclosure here – your author has long been obsessed with the play King Lear, positively knowing it by heart and despite the recent publication of Dunbar, a modern take on the legend, can't help a far better way of building a new story on the myth from growing inside my head... one day, perhaps.

But for now, it's the Tales of Britain retelling we're concerned with, and although the play contains not a single word too many, cutting it down to size for our collection seemed quite a task. But the more you boil down the story, in some ways the better it gets – because what does the King learn in that wild and life-threatening storm which qualifies the tale for this week's Weather theme, but how to be a human being? Our version retains the Fool, but otherwise returns the story back to its most ancient structure, and no matter how you tell it, King Leir is a story all about humanity, and charity. It's about a King who has lost touch with what it means to be human, and learns the hard way that every person in his kingdom matters, not one jot less than an old man like him.

This wonderful and crucial moral becomes all the more stark when the tale is reduced down to its clearest form, as in our collection, but we're glad to add that we haven't simplified it into an anodyne fairy tale – no 'once upon a time' here – but have striven to echo the grim poetry of Shakespeare's play, and bring it to life for a new generation. And of course, central to the story is still that refreshing rant in the driving rain, wind, hail, thunder and lightning somewhere on a blasted heath out Leicestershire way (some say the raving ruler took shelter in Black Annis' cave).

Take a Shakespearian jaunt to Leicester yourself, and see – or perhaps feel – whether you can picture the real Leir and Cordeilla standing on that land, nearly 2,800 years ago. Whether you agree or not, you can even find the play's final tableau recreated at the Watermead Country Park... Hopefully it will keep nice for you. 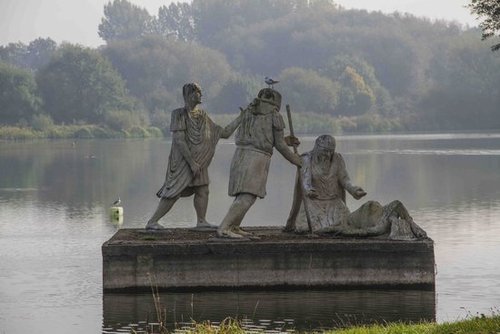