Babes In The Wood: Suitable For Minors? 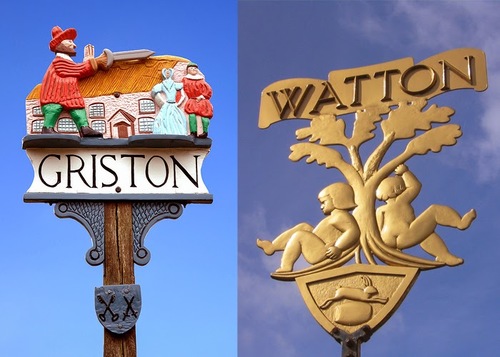 These signs are proudly displayed in the Norfolk village of Griston and town of Watton, testifying to the areas near Wayland Woods as the site of the original events which gave us the story of the Babes In The Wood. For all the tale's development as a fun pantomime every Xmas, all the added jollity of the babes being taken in by Robin Hood & His Merrie Men, what we're dealing with here is a truly tragic news story of the 16th century, which has, quite perversely, persisted in our culture to the point that it's now a family entertainment. But to return to the original source material does present a challenge for a collection like ours... 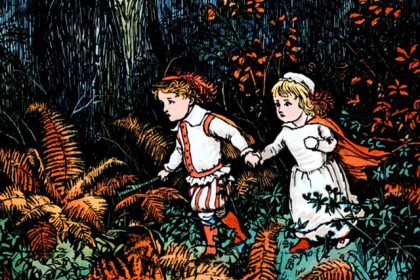 It seems bizarre that we haven't blogged yet about Babes In The Wood, I was sure it was one of our first blogs, so fascinating is its place among our 77 stories. But today's 'Childhood' theme does present the perfect opportunity to take a closer look. At some point in the mid-1500s, the master of Griston Hall died, leaving his heir and daughter in the charge of his brother – who apparently decided he'd rather pay a couple of local toughs to take the two small children out into Wayland Woods and dispose of them, leaving him master of Griston in his own right. The gist of the original broadside ballad published in 1595 seems to suggest that at least he didn't get away with it, and never got to enjoy his ill-gotten gains, but any which way, the babes were never seen again.

Over the years, many changes were made to make the story more palatable for the likes of Disney, from heavenly angels who take the babes up to heaven to the aforementioned Robin Hood plot – but our version tries to offer the full array of possible endings to the story, rather than just bowdlerising and softening the tragic source material. Returning to our theme last week, of the tragedy of Tristan & Isolde, the vast majority of our 77 stories are packed with laughs and fun, trying to rouse the spirit of Rik Mayall's Grim Tales and so on, but there's really no room for added gags in Babes In The Wood, and it's impossible to forget that ultimately, we're dealing with a real murder mystery. 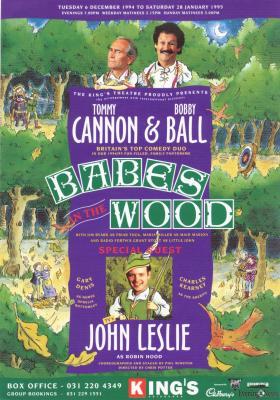 John Leslie? Won't somebody think of the children!

Problems like this are to the fore at the moment, as the full manuscript of Tales of Britain has just come back to me after its first copy-editing. I have to admit, although this is my 5th book, I have been a bag of nerves at the idea of these retellings being judged by a stranger. The retellings in our live shows, and many many private storytellings with friends and family, has always suggested that what we've done is great, reviving our national lore in a gripping, funny, entertaining way, but besides the first feedback from our publisher, Unbound boss John Mitchinson, that TOB's retellings are 'genial and engaging', this is our first real independent feedback on how the book will be received. And although manifold stresses – such as being on the verge of handing back the final proofs of Soupy Twists – has prevented me from diving into the full copy-edit MS, I'm very glad to say the overall response is:

'This title is enormous fun – swashbuckling, energetic and amazingly broad in range. I enjoyed the way it’s structured to run through the ages: this makes it a history of Britain too, in a quirky sort of way. It was also good to realise which of our classic fairy tales are home-grown, given that so many of them were imported. Overall it’s a huge achievement – congratulations!'

Of course, this warm encouragement does go on to pinpoint areas for improvement, which is very appreciated, and we'll now be doing all we can to tweak and perfect the MS in every way. However, one issue I'd like to share here is that 4 of the 77 tales were highlighted as potentially worth dropping or swapping – because they were too slight, too much of a squib, or in some way lacked cohesion. I am going to do all I can to obey the copy-editing suggestions all along, every single change which makes it a better book has to be heeded (for instance, from the very start, as you can see from all the free tale samples we've shared with you, each tale has had its own little rhyme to bookend the text, inspired by Rupert annuals, and tied in to the original book title, 'Brother Bernard's Big Book of British Ballads', but they've been suggested as superfluous, so out they go. We can always use them in some other form, if we get to do further volumes or special editions, which we dearly hope we will), but in this case, I think with 77 tales on offer, a few are always going to be each individual reader's favourites, and a few least favourites. With such a breadth of story style on offer, it's impossible to please everyone with every tale. I'm sure that's the case here. And so although those 4 nominated tales will receive extra attention to improve them, we won't be changing or dropping them, keeping the 77 tales intact, especially after promising them to you all for so long!

But the other key midge in the anticeptic is the question of whether the book is SUITABLE FOR MINORS – an apposite issue for today's theme. One of the main appeals of Unbound for this book was that we could escape the hidebound, robotic pigeonholing of children's publishers, where nothing gets commissioned unless it's mercilessly targeted to some kind of Key Stage demographic, and free expression be blowed. Kid's publishing really is depressingly limiting these days, publishers terrified of anything that doesn't fit into a tiny box. The fact that, personally, I had seen An American Werewolf In London and every episode of The Young Ones by the age of 6 and have turned out relatively sane, is one of the many things that means my blood cools when children are targeted in this way. Nonetheless, there is a duty to the book-buying public, and so for Tales of Britain, we're ultimately talking about a Horrible Histories age group, whatever that is – and it certainly includes adults of all ages. But although the tales are intended above all to be shared with all ages read aloud, for personal reading purposes, there's no point in trying to cater for very small children, not when there are saucy mermaids, vicious murders and a fair deal of scatalogical naughtiness included. Children are far tougher than any publisher dares to admit, but we'll include warnings for any particularly rude or scary story, and try and aim securely at older kids who like a laugh, and lovers of folktales of all ages above. Hopefully that will allow these tales to come through to you intact, and in fact, all the better for not trying to cater to the very young, offering a slightly more sophisticated approach here and there (basically, less usage of the word 'poo').

Nothing could be as scary as the idea of plunging into the copy-edited manuscript anyway, but that is precisely what is happening today. Wish me luck, and I'll do all I can to make these 77 tales perfect, for most ages – albeit for just a handful of stories, babes may need to be protected. 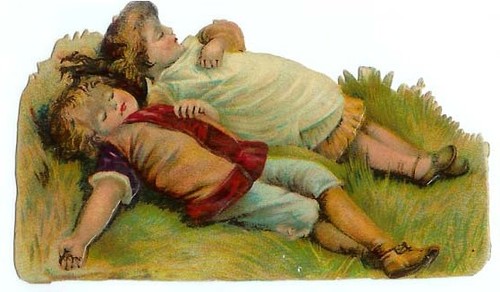