A glorious Folklore Thursday to all our lovely backers!

Would you like to help us illustrate and find a fresh visual dimension to Tales of Britain? Do you know any keen artists who would simply love to get involved, and create the look of 21st century British lore? Well, do read on... 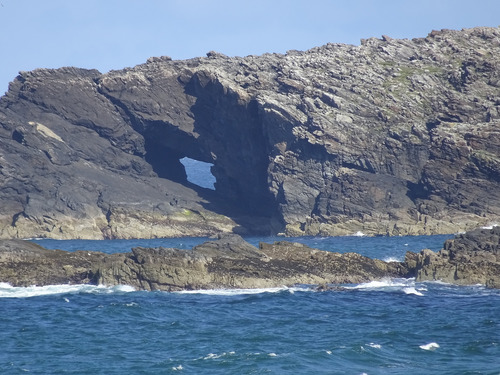 This here is the Eye of Lewis – the very hole through which the last remaining giant of Albion threaded his rope, to drag the Hebridean isle up to where it now is, avoiding the loutishness of his fellow giants. This is only a very short story, but it's a great way to reflect the way that immigrants have been treated over the centuries – the right way, and wrong way to build a multicultural Britain. We'd also wager that Roald Dahl was a fan of this legend, as the big friendly giant protagonist is on the side of humans, unlike the other 'orrible lot.

The other great thing about The Eye of Lewis is what a wonderful visual opportunity it provides for artists, which brings us to this thorny problem of Tales of Britain's design. One of the worst things about crowdfunding is you're compelled to air all your working out as it goes along, as opposed to presenting the public with a finished piece of work. And some may ask, how can you be expected to pledge for a book when you don't know how it will look?

I have been basically left to try and present this concept visually on my own, throughout its 13 year (and counting) history, and though I've striven to get across the bold, joyful, accessible nature of our folktale collection, a few of you have been in touch to say that what we have is too cartoony, too kiddy – I don't mind any constructive dialogue, and the thing is I'm no illustrator, so nothing I have presented is intended to be finished product. We want to find artists and designers who can catch the feeling we're trying to give, but do it more professionally. So this GIF I created:

...Hopefully appeals to more folk than it puts off, but I did remove it from the website front page for fear of seeming too amateurish. (Although I do have some history of professional cartooning – I invented Professor Yew for Pokémon World, for goodness' sake! And as for Osmondle the Frog... anyway.) Even the replacement image on the website needs more work, but we're in a chicken and egg quandary – until we reach 100% and the book is properly underway, Unbound can't expend any time on these issues, and we don't have a penny to spend on anything, let alone design and art. We're reliant entirely on the kindness of artists who believe in our folktale cause, until then.

And some wonderful artists have been very kind, and helpful, hitherto. The first artist to offer us some visual content (sorry for the phrase) was Bristol-based illustrator Philip McCullough-Downs, who provided a couple of incredible monochrome images which I'd still happily use in the finished book, beginning with the always tempting image of that Big Friendly Giant towing the Eye of Lewis north: 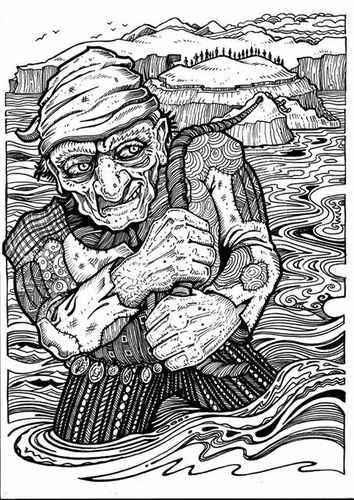 And Philip followed that up with a similarly gob-smacking illustration for the subject of our recent blog, Long Meg: 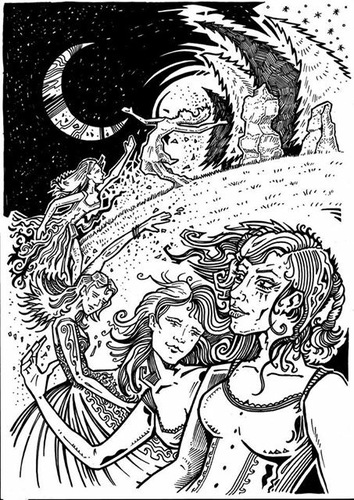 The image of the giant physically towing an island – not just Lewis, but the whole of Britain, packed with familiar figures like Arthur and Godiva and so on – remains somehow central to the visual approach to Tales of Britain, for me at least. Had I the skill, I think that's the illustration I would lead with, a friendly giant waving to the reader as he pulls along the island of Britain behind him, all the mysteries of British lore peeping out from the hills and valleys.

Perry Harris (@Uhperry) is Bath's cartoonist laureate, an astonishingly skilled and prolific commentator on everything that happens in the city – and of course, everywhere, there's nothing parochial about Perry's work! I was tentative about bothering him with – we cannot call anything like this a 'commission', we cannot stress enough that expecting anyone to share their talents for free could not be more anathema to any of us – let's call it 'the favour of helping support Tales of Britain with some eye-catching art'. But he delivered this wonderfully intriguing image in his own classic style, and then a few days later proferred a wholly distinct take on TOB's visual potential: 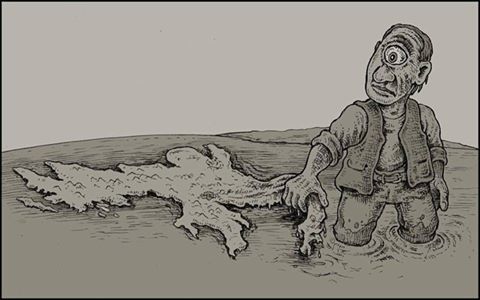 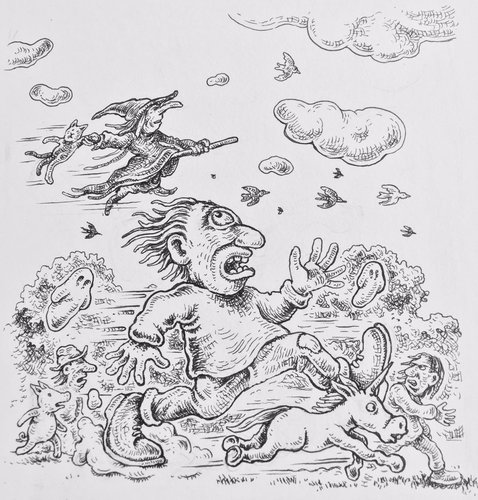 Witch, ghosty, unicorn, piggy, what's not to love? Needless to say, both images made their respective days, for our campaign, and Perry will hopefully be providing more when the muse strikes! What is absolutely key is that we avoid all the clichés of folklore illustration, which tend to be so ethereal, dainty, olde worlde, pastel – there's no fun in that. Although some tales – the less larky ones, like Tristan & Isolde or Babes In The Wood – would benefit from a more serious take, and if it were up to me we would have a whole range of art styles in the finished book, to compliment the range of different tales! Just as every episode of Grim Tales had a different animation style. This could also give us the chance to vastly increase the diversity of the creative team putting this diverse collection together.

I was talking to wonderful illustrator Danny Noble (@MundayMorn) about this long ago, when I became an admirer of her hilarious Willie-Rushton-esque drawings, but now she's become big and famous and illustrated Ade Edmondson's new book, we're not sure we dare bother her any time soon... We do also have three of our finest comic artists already pledged and on board the Tales of Britain bus – Viz's Davey Jones (@DHBJones) and Alex Collier (@alexoddball) and the creator of Private Eye's zeitgeist-grabbing Scene and Heard, David Ziggy Greene (@SaHreports), and any of them would be a dream come true, to provide any images for any of the 77 tales that takes their fancy.

But of course, we come up against the same old problem: no money, and a disgust at the idea of expecting professionals – or indeed, any talented artist – to ever work for free. But just as we are living and breathing this campaign 7 days a week with zero pay, we hope that people understand if we open up the option for ANYONE OUT THERE to send us ideas, sketches, artwork that will aid our campaign, give us something to shout about on social media, and perhaps, when all is funded and full-on, that may hopefully lead to a proper paid commission.

You can get an idea of some of the 77 tales by seeing the titles flash up on our pitch video, and just see if they spark off any creative activity? If so, it would be a boon to our poor knackered senses to see it, either sent via here, Twitter, Facebook, or emailed to bernard@talesofbritain.com.

Don't let that poor giant's earth-moving mission be in vain! We need all the support you can give us, to get through to that mystical 100%! Keep spreading the word, we don't want this campaign to drag!