LET THE SCRUMPTIOUS YULE FEAST, MEAD AND FLESH AND WINE AND CAKES AND ALE, BE ENJOYED BY ALL PLEDGERS THIS FOLKLORE THURSDAY! 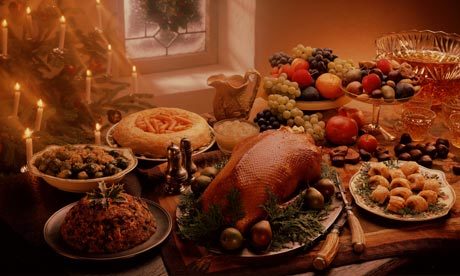 With only a week and a bit to go until our 2018 YULE special live show maybe we shouldn't be sharing free stories, but well, it's Xmas, so do find linked above the full – and rather boozy – one-man rendition of THE LAST YULE, last year's free Xmas story for you all, which you won't find in the book (though we now have seen the full cover, and are getting very excited about next month's release at last!), but will be performed live for the first time by Brother Bernard and Sister Sal in the show on Saturday week!

Plus as ever, we will have a GREAT BIG PIE packed with free sweeties, of course! This is the closest we can get to a traditional Saxon Yule feast, but do feel free to bring your own suckling pigs! 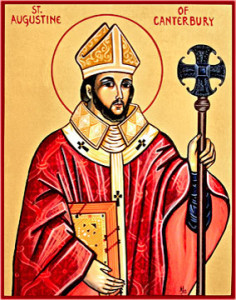 Today's story concerns a first millennium Christian, an Italian called Augustine, who was sent by the Pope to convert the English Saxons to their funky new lifestyle choice – and the danger their zealotry posed to the Winter Solstice fun that we had all been having for many centuries, long before the bread-and-wine-themed religion had been invented! It's a tough folktale to track down – my first hearing of it was in Stephen Fry's Paperweight (ahem, the official Fry & Laurie story SOUPY TWISTS is still in shops, should you be short of a present for a discerning comedy fan friend!), but this retelling is greatly expanded and jollied up in full Tales of Britain style, so whether you enjoy it right now on YouTube or live on Saturday, we hope you enjoy it! 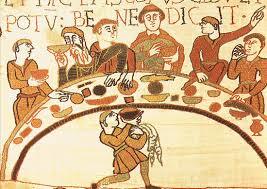 The Yule feast is essential to the story, it's the riotous, rich, warm scene where Augustine takes his gamble, to convert the drunk Saxons to his religion, and to this day we're all still trying to recreate the mouth-watering, rich yumminess of those Saxon feasts every Christmas – it's the groaning board which inspired Dickens' A Christmas Carol's most loquacious passages, the boar's head enjoyed by weird people every December 25th, the true essence of what it means to celebrate life at this time of year, with the yule log crackling in the grate and the snow battering at the windows.

It's also, of course, a largely true story, attached to the Kent locales of Ramsgate and especially, of course, Canterbury, as Augustine was made the very first Archbishop of Canterbury after managing to wangle the Saxons into buying into the whole Jesus thing. Luckily, the Catholics made damn sure not to ruin anyone's yuletide traditions – they knew they had to keep these barbarians on side, and so their faith came packed with endless feasting opportunities! A millennium and a bit later, Christianity may have come and all-but gone from popular observance in Britain, we have never stopped celebrating Yule every December 25th!

Long may this be so, no matter what your personal beliefs. HAPPY YULE! And eat up.