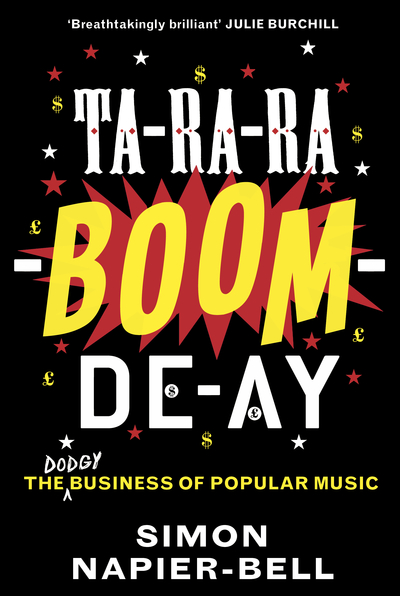 A one-volume insider history of the whole damn music business

What is it?
In 2002 I wrote a history of the post-war British music industry called Black Vinyl White Powder. Although it was amazingly well received I was a bit disappointed – not with the reviews but with myself. I wished I’d had the courage to tackle the whole damned thing, the story of the music industry right from the beginning - from 1713 when the British parliament gave writers the right of ownership in what they wrote, till to today, when a worldwide industry worth 100 billion pounds and originally created by Britain and America has been reduced to just three major companies - Sony, Universal and Warner - under the control of Japanese, French and Russian owners.

Is it for me?
Yes. If you have ears. We are all surrounded by music: it permeates our lives but we don’t often step back and think about how it’s made, how it works, how it functions as a business. Ta-ra-ra-boom-de-ay will do that for you. Across 28 anecdote-filled chapters, it will answer the questions about music you didn’t even know you wanted to ask.

Like what?
— How a formula for writing hit songs devised in the 1900s created over 50,000 of the best-known songs ever
— Why the 'music industry' became the 'song racket', the 'singles business', and then the 'record industry'. But is now the 'music industry' again.
— How technology shifted the balance of power and created the big money - gramophone, radio, amplification, LPs, electric guitars, CDs, downloads
— Why Jewish immigrants and black jazz musicians danced cheek to cheek to create the template for all popular music that followed
— How Hollywood bought the music industry in the 1930s - then suffocated it
— Why American pre-war industry infighting closed down traditional radio and created an opening for country music, race records, and rock’n’roll
— How industry executives didn't realise till the 1950s that popular music could be sold to young people, and how they then lost their minds to the teenage market
— Why rock music turned the traditional music industry on its head and never put it back upright again
— How rock tours became the biggest, quickest, sleaziest, money-makingest things the music industry had ever seen
— Why disco stole the U.S. market for a year, then got backlashed into obscurity
— How rap, born from a DJs pleasant asides to his audience, became the music of hate and rape - and the biggest selling popular music in the world
— Why most of the music you hear everyday is still the result of organized pluggery

What do I need to do?
That’s simple. If you’ve ever bought or listened to popular music, you should pledge to support this book. To attempt to tell this epic story in one volume sounds like madness, but I know it can be done and be reasonably complete as well. The team at Unbound think so too. But it is a huge amount of work and I need your help to complete. So, pledge now and help us make musical history.

Why Ta-ra-ra-boom-de-ay?
Good question. You’ll have to read the extract below…