The Lion and The Unicorn

I’m sure many of you loyal Team Darwin members have perused the Unbound digi-shelves, looking for literary treats and even pledged your support for other fledgling books? There’s such a wide-range of genres, but I’m often drawn to the speculative or dystopian books (think Sour Fruit, Bone Lines and The Third Wheel) and a new book has grabbed my attention – ‘The Lion and The Unicorn’ by Tom Ward.

Intrigued by the title and the premise of Britain in 2054 where ‘bad taste’ has been made illegal, I wanted to know more, so asked Tom a few questions…

If ‘The Lion and the Unicorn’ had three parent books, who would they be?

Good question. Before I started writing I allowed myself a few weeks to re-read/watch books and films I thought would inspire me. Orwell's 1984 is a huge influence on what someone has called the claustrophobia of my book. But I purposefully didn't re-read 1984 before writing because I didn't want to rip it off.

I'm also a huge fan of Graham Greene and The Ministry of Fear was a big influence. It's set during WW2 but again it has this paranoia and claustrophobia about it, and the title is so evocative of this secret, controlling organisation. I found it really inspiring.

I'm going to throw a curve ball in for my third book and mention the graphic novel Batman: Year 100 written and illustrated by Paul Pope. It's set 100 years after the original Batman has disappeared and a new caped crusader has taken up the cowl, and is hunted by the police. It's brilliantly frantic and the world feels so immensely thought out. The type of book you wish there was more of, but the fact there isn't makes it so special.

The Lion and The Unicorn, sounds like the name of a great pub. Are there still pubs in 2054 Britain and is real ale available?

There are pubs, certainly. But being unhealthy is Bad Taste, so the emphasis would be on wellness juices. Or you'd be free to have 'ginsynth' or 'vodkasynth'. Think of it like vaping is to smoking cigarettes...

The Lion and The Unicorn clearly has a dystopian vibe… what’s your favourite dystopian book or film?

So many. I'd have to say films are the main influence here. In no particular order: Children of Men, 28 Days Later, When The Wind Blows, Dawn Of The Dead, Plague Dogs, A Boy And His Dog, Blade Runner, Akira... and many more I can't remember! Book-wise it's difficult to do better than The Road by Cormac McCarthy, although that's more apocalyptic than dystopian.

Why do you think us 21st centuryites are attracted to dystopian stories?

I once interviewed Max Brooks – author of World War Z – about this. He said because it helps us process the anxieties of the times we live in. That's why we had all these films like Threads about nuclear war in the '80s. I think in 2020 and beyond we're all incredibly anxious about everything from global warming to the rise of nationalism and populism, technology replacing the work force etc etc. Dystopias are a good way to explore these themes.

How did you work out the UK citizen rating system in TLATU? Was it fun? Can you explain the ‘Pride, Stability, and Civility’ system?

Well, the system is purposefully vague – you get the idea that those in power can twist it to cover anything they like. But this is how I laid it out in the book:

To ensure order post-revolution, the ‘new’ government implements The National Values Act 2039, based on the three pillars of a secure and prosperous society: Pride, Stability, and Civility.

Each citizen is scored out of 10 in each of the three categories, with their ‘National Values Score’, or ‘NVS’, tracked. A person with a score of 7/10 or less in any 2/3 categories is subject to arrest.

You can pledge your support for ‘The Lion & the Unicorn’, which has a variety of rewards available, to help get this amazing book published! 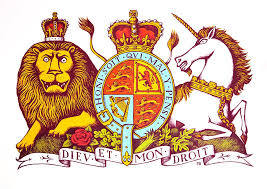