Thank you everyone for your support! I hope you all enjoyed reading Darwin’s Soldiers and are as keen to me to know what happens next? (Don’t worry - I’ve got a pretty good idea of what lies ahead for those guys)

Survival is over 20% funded already and I’ve been writing away, building the new world John and his allies discover at the end of Darwin’s Soldiers. I’ve brought in new characters, some of which will be named by you! Whether we use a name chosen by you (it doesn’t have to be your name!) or a special birth date, I’m hoping there’ll be plenty of characters for you to choose from. At the moment we have a few human soldiers, a shiny new Lutamek, some bad-ass alien commanders and potentially a new name for Delta-Six!

So, seeing as I’ve just passed the half way mark for the first draft of Survival (and therefore The Origin Trilogy as a whole) I thought it was time for a sneak preview!

‘I… I’d like to find out more about my gun-arm,’ John shot a glance at Ten-ten then looked nervously away.

‘Yes, that would be good, thanks.’ John hesitated then said, ‘can you scan it when I fire it?’

‘To ascertain the composition of your bullets?’ Ten-ten asked. ‘Yes. Let’s get ahead of the army.’

‘All right then,’ John said then tightened the straps that held his gun-arm to his chest and started jogging away.

‘Allow me,’ Ten-ten said and lifted John up by the straps across his back.

‘Woah!’ John said as they rushed forward at a speed he could never have reached even with his good leg and no baggage.

It was a bit like riding an invisible horse, he thought.

As soon as they were out of range, John unstrapped his gun and spun a few bullets for Ten-ten.

‘Right, here’s a couple of stubby bullets,’ John said as he fired. ‘Followed by some gnarled smashers… and a few long range snipers.’

A series of dust explosions a distance away in the dirt signalled the end point of each shot, showing John his gun was still working.

Ten-ten’s light cut out and it moved away towards the impact points with John on his trail.

‘It appears your gun-arm is still changing,’ Ten-ten replied. ‘Partly due to the loss of material and partly due a recent acceleration event.’

John frowned and stared at the army who were closing in on them. ‘Oh! I took a shock when I was in the dome cap, would that be it?’

‘Yes, any excess energy could stimulate the process. And…’ Ten-ten held out its left palm over the ground and John saw several thorn-thin slivers rise up, ‘…the material has been lost with each shot.’

‘These are your bullets,’ Ten-ten said.

‘But what are they?’ John asked.

‘From the remnants of your arm bone,’ Ten-ten replied. ‘While the steel has been taken from the body of the gun.’

John swallowed and stared at the slivers, then asked, ‘And if I keep firing these bullets, what’ll happen to my arm.’

‘Eventually the material will be used up,’ Ten-ten started walking again, keeping them fifty steps ahead of the army who had almost caught up. ‘But the firing mechanisms will cease to work effectively before all the material is depleted.’

His eyes drifted to the horizon as he tried to understand the ramifications of the news. Should he stop using the gun, to save his arm? 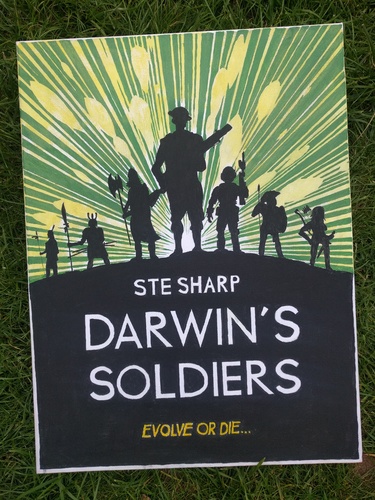