Stubble and Steel on Mountains High

Comment: Ride it in the wet or at the time of The Classics to feel complete.

Martin Velits, Etixx Quickstep, 2016: "Koppenberg - Steep. Steeper than it looks on TV. You have to ride it to be able to experience the gradient. I love the classics, Belgium and the cycling culture. This Climb is like a temple for them. You can feel the vibe there even when riding it up on regular day with no race or spectators in sight."

Antony Blake: "Turning right from Melton onto the climb, I could see the apex of the hill. How on earth am I getting up there? 22% gradient, damp, wet cobbles, I must stay in the seat otherwise I would be off." 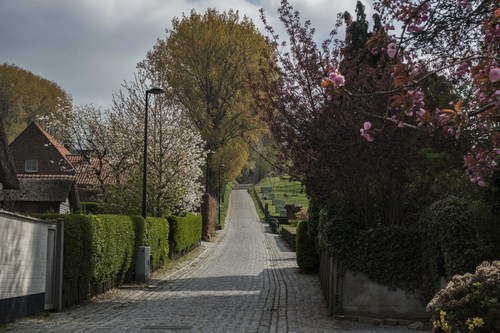 The city of Oudenaarde lies 75km west of Brussels and only 5km from the Koppenberg, which made it a perfect starting point for the day. Its foundations were laid in the late 900s by Otto II Holy Roman Emperor as a stronghold against the French. In the 11th century, Oudenaarde’s economy flourished thanks to the proximity of the River Scheldt and to the booming cloth and tapestry industry. From the 16th century, the town became the site of a number of territorial battles between its neighbours, and in WWI it took serious damage. I suspect the demand for tapestries has waned in recent years; fortunately, the town is now famous for its beer festival, the smallest brewery in Belgium and a number of events in the early part of the year's cycling calendar known as the the Classics or Monuments. My pre-ride research sources identified Oudenaarde as Belgium's capital of cycling, perhaps because the Flemish region bore several famous cycling sons like Eddy Merckx. This status could have been reached for a number of features: in my opinion, through having more wind, miserable rain and near-death cobbled climbs made it the most serious contender.

Today, the town's main features are the Centrum Tour of Flanders, a museum dedicated to the Tour of Flanders with a great cycle-themed restaurant, a new hotel, a large flyover which is something of an eyesore, viewable from most of the town, and a very small old part of town consisting of one traffic light at the end of a T-junction, should there be more than three cars out that day.

The time to be in the Flanders region is around the time of the early Classics. This built my anticipation of conquering the climb. Being battered by the wind, rain and chilled by the low temperatures, at least I could experience elements of the climb under conditions close to the those endured by the pro Classics riders, the hard men of the sport. I believed a hard man of Belgium always started his day with a hearty breakfast, Belgian style, which involved a lot of bread, jam, boiled eggs and cured meats.

I took this first part of the day very seriously, before gearing up ready for all the elements and heading out. The 5km route out of town towards the Koppenberg was relatively urban. Over the new bridge and right into the old town, I headed to the T-junction. Once clear of the buildings, the hills began to appear, dark patches of forests on the horizon following every twist and snake of the main road. The forests of east Flanders had been in decline for years, and only 10% of the land remained forested. I could not help but wish the Belgians had made a bigger effort with their replanting, for a little more protection from the wind which was starting to blow away the droplets of drizzle starting to form on my cap and glasses.

The dread started to build as the Koppenberg’s notoriety struck me. Not only was the gradient unyielding but this climb had broken even the toughest of men – literally! Somewhere in those dark patches of five rapidly declining conifer forests, the Koppenberg lay waiting. The flat landscape certainly made the lumps and hills look bigger than they should have. From Oudenaarde, riding parallel to the N8 highway, the climb began in the village of Melden. On a map look for ‘Steengat’ or ‘Stone-way’. There was little signage for such a climb of myth and legend. Hubert Hoffman, a resident of Melden, first informed the Tour of Flanders organisers about the hidden track and it was included in the 1976 race. Over the next decade its bad safety record for the racers eventually excluded the climb for 15 years until 2002 when renovations widened and re-paved the road with handmade cobble stones imported from Italy. Renovations began again in 2007 because of its unsafe conditions and then it was included again in the 2008 edition and has featured ever since. Not long into Meldon, the brown heritage signs began to appear directed me to the famous ‘Stone-way’. At least the square architecture of the town provided a wonderful shelter from the side winds as the rain thinned to drizzle. For somewhere so famous I thought the signage would have been clearer.

I flicked right off the main road and the smaller road constricted at a 3-way junction surrounded by some tidy brick houses. The modest sign announced the Koppenberg, and the small buildings ended where the climb began to kick up. The rain had stopped. The path ahead was like a wet tunnel, funnelling ever narrower and upwards to a point far too high and in the distance. The cobbles were huge, the gaps in between them perilously large enough to snag most tyres and of course they were wet and slippery. The wind had driven the clouds across the region and the warm sun was at least drying exposed parts of the route.

Turning the corner to see the climb for the first time was a view I will never forget. It was an awesome sight to behold. I was about to enter a dark, wet, slippery place. The Koppenberg lived up to the hype. It did so emphatically. I gazed upwards for what seemed an unreasonably long time for such a short climb. My only thought was, “How the hell am I going to get up there?” Nothing could prepare you for what I was about to face. With a near perfect rhythm, I committed to a line along the middle of the cobbles and hoped I had chosen well to float over the stone tops shaped by the Italian craftsmens’ hands. The pros favoured the side channels. Committing to 6, the centre line allowed me the to drift either side and not fight the line and just focus on a steady turn of the cranks. The Koppenberg was upon me, rising up to a 22% ramp on wet cobbles. At best I might stay upright on my bike. At worst I would tumble unexpectedly like a sack of Belgian potatoes. Cobbles are tough. Wet cobbles are like an ice-rink with lubrication applied, and it just got steeper. I pushed forward and upwards, tentatively maintaining my smooth rhythm as I headed into the trench deep below green fields and underneath two parallel rows of regal trees that stood as lofty spectators for anyone who cared to make the attempt. 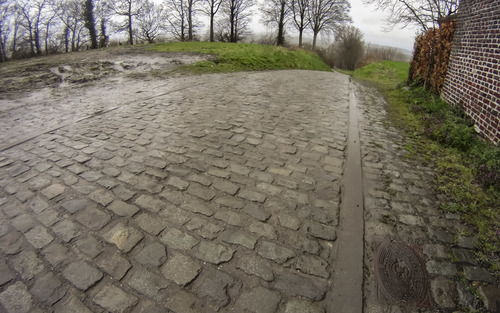 The great thing about ignorance is that you cannot call upon experience. My experience would have said to get off, get bigger tyres with more grip or go home, because it’s wet and this is stupid and I’m not going to make it. I had never ridden on cobbles, so the beauty of ignorance helped me and I convinced myself that with a steady cadence, no sudden surges and just sheer bloody mindedness, I just might climb this hill in one go and in one piece.

About one quarter of the way up I emerged out of the initial trench. Doubt began to creep in and the climb was about to hit its peak in the middle section. The steep banks on each side meant that dirt was washed down by rain, making the Koppenberg even narrower and the mixture of existing moisture and earth made the surface even more slippery. Somehow, I managed to stay upright as the gradient regained a semblance of normality. The trees gave way a little to allow the sky to become visible and the climb then pitched up again. Towards the top, close to the summit, there were still a few more metres of continually uphill cobbles before I finally reached smooth pavement again. From watching The Classics on TV I knew that the two farm buildings up ahead marked the top. Pass the buildings and it would be over.

Suddenly the smooth tarmac felt like riding on silk. The farm buildings had overhanging roofs to shield me from the wind as I took a mud-spattered moment to enjoy my triumph. There are very few climbs in modern bike-riding that cannot be tamed with the evolution of modern gearing, yet the Koppenberg seemed to defy all technological advances. The Koppenberg was a superb climb however it should not be underestimated and could be the single reason to go to Belgium with a bike.

First, limited edition with your name in the back as a founding supporter
Choose this reward
£50  + shipping
14 pledges

First, limited edition hardback with your name in the back as a founding supporter plus limited edition (100 only) black t-shirt with 50 climbs (5'8in 75kg fits a medium. Size range XS, S, M, L, XL – we will check which size you want after funding, before ordering the t-shirts) 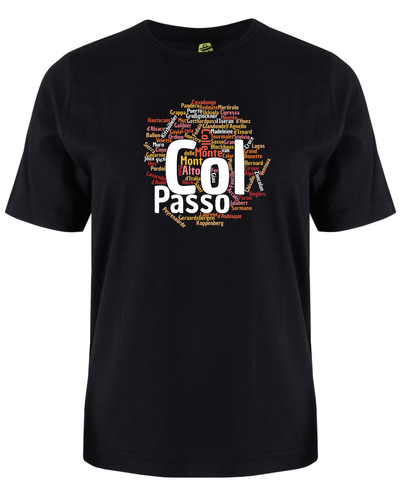