Stranger In My Heart

Retracing her father’s heroic escape across China in World War Two leads his daughter on a gripping voyage of discovery about him, China and, inevitably, herself.

Journey up the East River

When Dad's party reached Huizhou, they found it a burnt out ruin, but celebrating Chinese New Year in spite of it all. This delayed their onward journey and meant a frustrating few days wait. More positively, they were now classed as refugees and were given a small daily allowance. 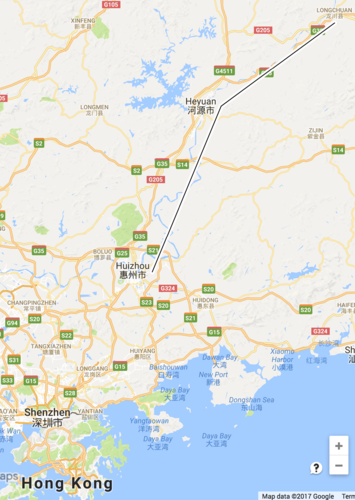 "Finally we got a passage up the river.  We travelled in two boats; the leader had a charcoal gas engine and looking like a long floating potting shed, I travelled in a large flat bottomed barge, covered with matting, about 55feet long and ten feet beam. It looked just like a black water beetle, though inside it was beautifully clean, this was towed behind the leader”.

“There were about 30 people in the leader which was the smaller of the two boats, and which used to list in an alarming manner as its passengers moved about.  In the larger there were about 70 people.  As it was only about 60 feet long overall and quite large areas in the bow and stern were reserved for cooking and the crew you can imagine how crowded we were.  It was only about 8 feet wide so that when we lay down for the night our legs overlapped.  We were literally packed like sardines.  Once you were settled for the night it was impossible to move without waking up your neighbours”.

“This journey up the river was quite the most maddening I have ever experienced.  We started a day late because one of the passengers suddenly found that he still had some business to transact in Waichow.  Having started we broke down within two hours, tied up at the side of the bank and stopped for repairs.  Later in the evening we got going but again broke down shortly after dark.  This time the clutch had burnt out and a valve spring had broken.  This took 18 hours to mend. The third and fourth days were comparatively trouble free until we broke a valve spring.  Thereafter we continued to break valve springs for the next two days until we arrived in Ho Yuen (now Heyuan)”.

Dad doesn’t mention the risks inherent in this voyage. Hewitt’s party also took a boat up the East river but were ambushed by pirates with rifles, forced to pay protection money to an opium smoking village chief and then attacked by an angry mob while trying to get a shave in a riverside village. They really seem to have had the most dreadful luck. Dad’s party met up with Whitehead on the river and they travelled together as far as Heyuan. Dad’s colleague Captain Trevor struck up a friendship with Whitehead and helped him with his Cantonese vocabulary.

At Heyuan, they abandoned the boat in favour of sampans, continuing their journey towards Longchuan.

“The sampans were far more fun than the motorboat.  There is about a 3 knot current in the East River and going up stream they are slowly poled along.  I suppose our sampan was about 35 feet long.  We had on board about 20 people.  Grandma steered, Grandpa, son and his pregnant wife did the poling.  We used to start about 6.30am.  They went on without a stop till about 10 when we tied up for the morning meal.  At about 11 they started again and went without a break till about 6.00pm where we tied up for the night; during which time we covered about 20 miles.  An astounding feat”.