Each week, I will be introducing you all to a contributor to Stim. If you're on Twitter, you can tune in on Saturday evenings around 6pm where each person will talk a little about themselves and answer any Qs you have; else you can pop over here to read all about it in condensed form.

This week I have the pleasure of introducing you to Robert Shepherd. Robert has always found the world confusing, and writes to try and help it make more sense to himself and others. He lives in a tiny slice of time inside a billions-year-old universe, and is horribly aware of that fact. You can find more of his writing here. 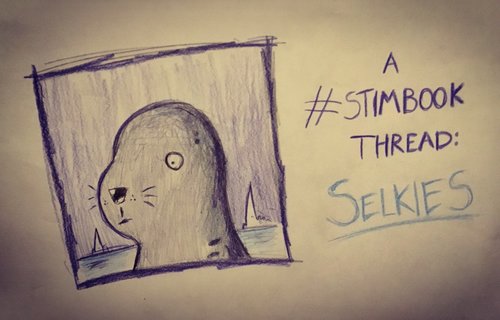 "Stim is a collection by autistic authors, which we’re crowdfunding to make a reality! Every Saturday at 6, there’ll be a thread from one of us about what we’re writing and why it matters. And this week it’s me, with my story about a seal pretending to be a human.

Nowadays, I work in human rights and write a lot of things when I'm at home. But my story in Stim is about my time as a fresher at Edinburgh University, where I was studying evolution and not coping very well at all.

Like a lot of autistic people I go through periods of intense obsession, and as a teenager I was very into evolution indeed. I was particularly focused on how little time human civilisation had actually been around, to the point it all seemed very strange to me.

My family were obsessed with me being a normal teenager, sadly, and I found most of what I thought teenagers were supposed to do overwhelming. So evolution was a form of escape: it was nice to think about the time the world had been less overstimulating, I guess.

But when I left home to study evolution I found the student world was even more overstimulating, and even more anxiety-inducing! I ended up having a very bad first year indeed. That’s the point in my life this story is set, except in the story I have a friend who is a selkie.

A selkie is one of the mythological creatures we have here in Scotland, and is a seal that can take on human form. To do that, they just take off their clothes as a seal— and become successfully disguised as a human! 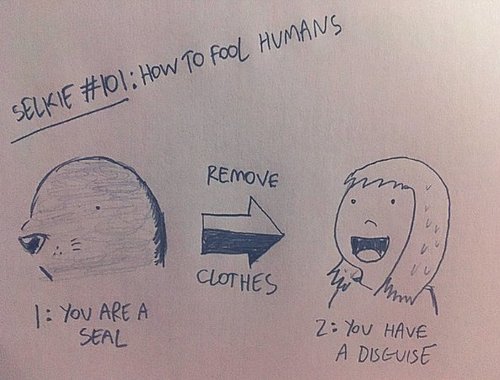 (How do they do that? I don’t know. A cat can’t understand that the cat in the mirror is really herself, and a person can’t understand how a seal can look like a human just through taking off his clothes. Sometimes things just are incomprehensible, whoever you are in the world.)

Selkies almost always appear in other people's stories, and the story is almost always about a man who wants to have sex with them for lord only knows what reason. We don't often get the chance to meet a selkie and to treat them as a person in their own right. And I think if we did we might find their stories to be a bit different from the ones we told ourselves about the world, but no less valid than that. It would be important to listen to what they had to say, so they could help us understand how large the world really was.

I think that’s true of anyone; whether they’re autistic or allistic or a seal who is pretending to be a human. So I guess this story is about trying to reclaim the dignity of my own story, and to empathise with the dignity of other people’s.

But it’s also about a time when I was in real personal danger, where I didn’t understand how much support I needed as an autistic person in an overwhelming situation and what to do when I didn’t have it. It’s about how not understanding the breadth of how people experience the world – if they’re teenagers, or autistic, and don’t fit into the boxes of those things – can put those people in danger, and can maybe threaten their lives.

And it has a lot of facts about seals, which you can repeat to your friends!"

Thanks to Robert for this great thread!

We are still ticking along nicely. The secret group of Unbound authors agree that the 40-60% portion is the hardest bit, but we're making good progress with a steady stream of pledges still coming every week, and lots of wonderful people on Twitter shouting about it. We are a few pledges off 48%, and I think we could still hit our 50% goal for the end of August (as long as the weather isn't *too* good this bank holiday weekend!).

As ever, crowdfunding is a collaborative process and every single tweet, email and text you send turns into pledges -- I can even (slightly creepily) see on the backpage of Stim what links pledges are coming from, which is rad!

Got a friend who loves selkies? Why not send them this blog?

An autistic friend who longs to see themselves on the page? Send them the pledge page.

A reader who loves to discover new voices? Send them the pledge page.

We absolutely will get to 100% and get this book in your hands, and I am doing as much as possible (whilst also moving house and laying up On Bodies for 3 of Cups Press) to get more pledges in the jar.

A copy of the first edition hardback, plus the ebook
Buy now
£5
216 pledges

A digital copy of the book
Buy now