"In the family album it is the only photograph of my father and I together. It is a black and white photo but I have coloured it in. We are sitting in the sun on the doorstep, I am in between the legs of my father, there are shadows of the railings against the pink sunny walls behind us. Half of my dad’s head is cut out of the picture because the photographer, probably Mum, hasn’t stepped far back enough, but my father is smiling. A cigarette dangles from his lips and he grins down the lens never knowing the top of his head and his eyes are out of the frame. There he is then, one bright morning, he sits on the doorstep in the sunshine with me sitting the next step down and I am his toothless daughter, grinning, sitting between his feet and holding onto his legs.'' Springfield Road 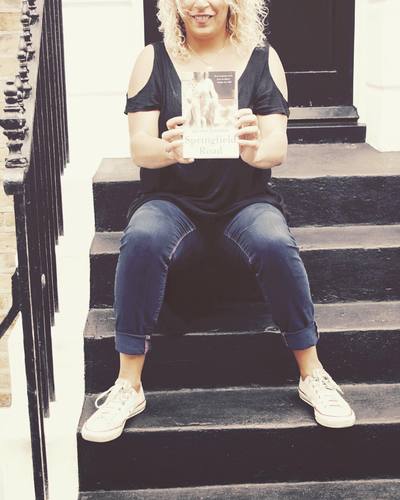 A couple of weeks ago we tried to recreate the cover of Springfield Road. We found the house where my brother and I were babies in Ramsgate. So strange, as we turned the corner to the street I remembered crying because I'd lost my doll over a wall. I was only about 2 years old but seeing this wall and the street and the house triggered this clear and vivid memory of loss and of losing something. The human mind, the heart and soul, must have so many stored memories that live in seeing brick and in time and space and geography, feelings locked inside us until we return. The house isn't pink anymore, but there we were, this was the street, the place where some of my ghosts live and time begins... way back in the early seventies, back when my parents were in that rose-tinted time, my mother a go-go dancer and my dad playing jazz down the road at The Granville Theatre. This is time travelling, jumping into photographs and recreating a moment in time when my father sat on those steps, the image we used for the cover of Springfield Road... echoes and footsteps and vibrations. For those of you that would like to read Springfield Road the best place to get a signed paperback now is directly from me at gigs and festivals or online at my new store!
Salena's Bookshoppe  http://salenagodden.bigcartel.com 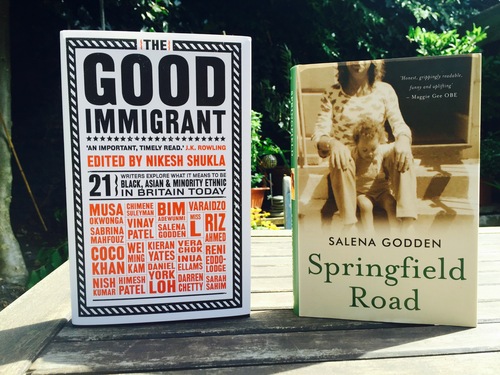 HUZZAH! The Good Immigrant is published THIS MONTH, September 2016 by Unbound. It is a powerful, passionate and compelling read, 21 essays by 21 diverse writers and thinkers on what it means to be BAME in 21st century UK. Edited by author Nikesh Shukla, this book was crowdfunded in record time and will be touring LIVE at various festivals and events. My contribution is a piece titled Shade, it is a deeper delve into some of the events and issues of race and identity that were explored in Springfield Road. 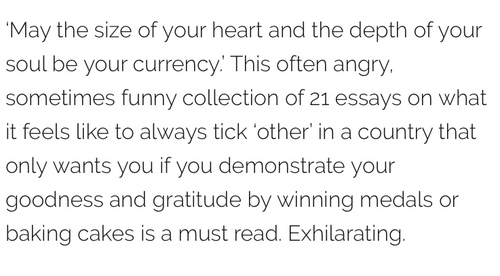 *Review of The Good Immigrant, the first line is a quote from Shade (Stylist Magazine)

The weeks are flying by so fast!! Whoosh!! Time travelling!!

My summer has been jam packed with poetry and writing and fun times and rum times and festivals and camping and travelling and laughter. I've been trying out readings of The Good Immigrant, sharing Springfield Road and Fishing In The Aftermath and my new poems up and down the country  - And autumn looks like it will be more of the same!  Massive heart felt thank you and BIG love to all who where there, at The Roundhouse, The Green Gathering, Margate Bookie, Glasgow's Verse Clique, The Edinburgh International Book Festival and Neu Reekie and the Poetry Extension in Toronto. We kickstarted September this weekend with Churchtown, a beautiful gathering, crazy weekend of pagan magick down in Cornwall.

Thanks for tuning in and see you here and there and before and after... 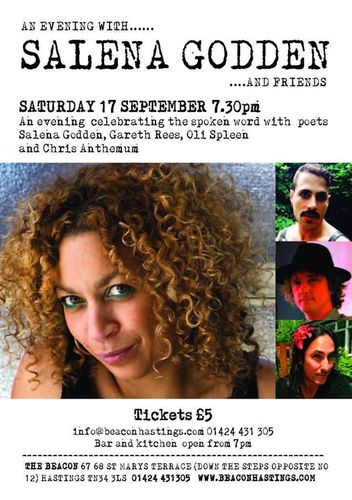 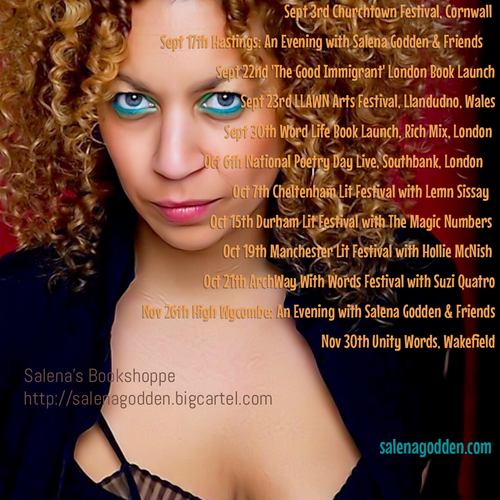 Don't forget you can now order books from me directly from my new online store!!