Hello to all Unbound Comrades!

I hope you are all well and you are enjoying the spring springing and blossoms a-blossoming wherever you are in the world.

I'm a guest on BBC World Service Click Radio - I've been commissioned to write something to commemorate the 25th Anniversary of the invention of the World Wide Web. Isn't it bizarre to think we've only had the internet for a quarter of a century! This programme promises to be a great show and discussion, I always enjoy making radio with the Click boys, so do have a listen - it will be broadcast on April 22nd.

This month I'm mostly up to my eyeballs working on a music programme with award-winning producer Rebecca Maxted for BBC Radio 4 ‘Try A Little Tenderness – The Lost Legacy of Little Miss Cornshucks’ which will be broadcast on BBC Radio 4 this summer 2014. We're off to the Windy City, to walk in the footsteps of the ghosts of jazz, blues and boogie-woogie whispering in the old dusty jazz districts of downtown Chicago.

This week I'm buzzing to be interviewing uber living legend Salena Jones - I'm SO excited to meet my namesake - and this is where my worlds and projects all collide. Salena Jones played some of the same rum clubs and blazed a similar trail to that of Little Miss Cornshucks. She also shared bills with Little Miss Sharecropper, Laverne Baker who was on the same record label as Cornshucks. Also I mention Salena Jones in Springfield Road because my father played for her in the early-1970’s. My mother has told me Salena Jones made such an impression on my father he insisted they name me Salena after Salena Jones. Funny old world isn't it! From first draft to here, Springfield Road has been a magnet for coincidence and serendipity, but you'll read all about that when its back from the proofers and printers.

I'm happy to see my book is back from the tailors though and below is a peek of the jacket artwork. I'm hoping to be able to tell you more about publication in my next update, so watch this space. Huge thank you in advance for all your patience and your kind support.

After Chicago I'm off to bonny Scotland, to Edinburgh to perform at the legendary Neu Reekie, Summerhall.

I have posted all details of April's gigs and more news over on my blog: www.salenagodden.com

Thanks again! And for all newbies the crowdfunding adventure is archived on #tumblr -  http://salenagodden.tumblr.com 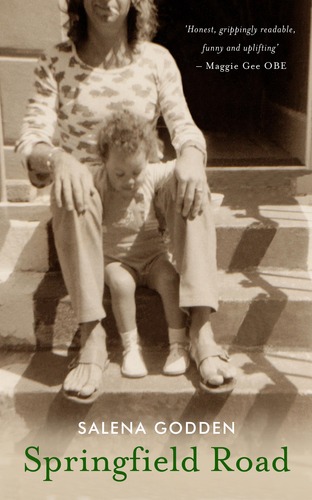