From the creator of Letters of Note, a compelling collection of history’s best speeches 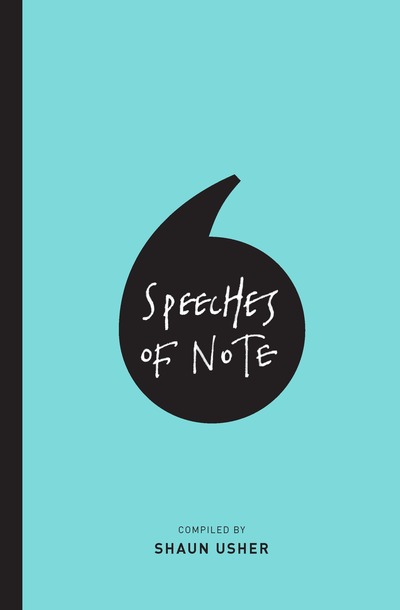 Speeches and More Letters of Note

Five signed limited edition, beautifully bound 4-colour coffee table books, with your name in the back of each one.
$440  + shipping
5 pledges

A hand-numbered limited edition in a deluxe presentation box, with facsimile reproductions of 4 speeches.
Only 20 available.

Speeches of Note will be a uniquely curated, lovingly designed coffee-table book filled with history’s most interesting speeches, sister to the internationally bestselling homage to old-fashioned correspondence, Letters of Note. Three years in the making, Speeches of Note will celebrate oratory old and new, taking care not just to highlight the speeches that we know and admire – e.g. those of Winston Churchill, Ida B. Wells, and Sitting Bull – but also to shine a light on those speeches which, despite their brilliance, have until now been largely ignored in these collections through no fault of their own, e.g. George Bernard Shaw’s warm and rousing toast to Albert Einstein in 1930; the commencement address affectionately given to graduates at Long Island University by Kermit the Frog; a beautiful eulogy to Marilyn Monroe, delivered at her funeral by mentor Lee Strasberg; from 1964, a rarely-reprinted but wonderful speech from the mouth of Maurice Sendak, in which he accepts the Caldecott Medal and speaks of his influences; and Tilda Swinton’s address to friend and “fellow freak” David Bowie, intimately delivered, despite his absence, three years before his death. Indeed some, for compelling reasons, were never actually read aloud, e.g. the chilling public announcement to be made by the Queen in the event of nuclear war break out in 1983.

Speeches of all flavours will be included – enlightening, gripping, comforting, disturbing, cheering, emboldening – arranged in such a way as to send you on an emotional rollercoaster, the majority accompanied either by a photograph of the speaker or the speech being made, a gorgeous illustration, or even, where possible, a facsimile of the original speech itself. Each entry will feature an introduction that will offer the context necessary for the speech to be fully appreciated. Anthologies of speeches have been published before; however, none have contained a selection quite like Speeches of Note.

In it you’ll find:

A timeless and eloquent speech given by Barbra Streisand in 1986, in which she calls for sexual equality across society

A rousing 1930 toast given to Albert Einstein by George Bernard Shaw.

Journalist Ida B. Wells, who tirelessly investigated and documented lynchings in the United States, speaking at the first conference of the National Association for the Advancement of Colored People in 1909.

An inspiring acceptance speech given by Maurice Sendak in 1964 in which he speaks of his influences.

Broadcaster Edward R. Murrow’s impassioned plea for those assembled to recognise and fulfil their responsibilities as educators of the masses at the Radio-Television News Directors Association convention in 1958.

As delivered to a group of students in 1955, a speech by editor William Maxwell that sees him comparing the job of a writer to that of an illusionist.

How will it look?

It will be the same size as Letters of Note (i & II) and Lists of Note, produced to the same high standard, with 80 speeches and short introductions and, where necessary, transcripts. We’re planning on a beautiful 350-page book, full of facsimiles and illustrations – a thing of beauty to put next to the rest of the series, so they'll all line up on a shelf (we know these things matter...)