In order to celebrate reaching the lofty and significant heights of 70% (actually now 71%) funded, here's a new photograph and story. Hope you enjoy them. 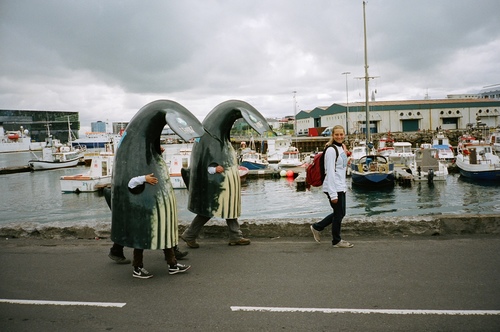 She has no idea what's going on behind her. That is not to say she is unaware of the two giant, fibre-glass whale tails shadowing her every step. She knows they're there but rather she is ignorant of the dynamic that exists between the two whale tail wearers and, more importantly, how that dynamic ripples out to include her, Britta. She believes today is just another routine drag at work, a summer job spent drumming up customers for the boat charter company known rather loftily as Orca Tours. She assumes, therefore, the novelty whale tails are inhabited by a pair of stranded Romanian brothers, Drago and Dorvan who are saving up enough money to travel to Sweden where they have a promise of work in their cousin's bakery. The Romanians are surly, speaking hardly any Icelandic and so for most of the day Britta barely talks to them as they follow in her wake. They might as well be hallucinations, products of a non-existent mental illness.

Today however, is not normal as today neither Drago nor Dorvan are shouldering the Leviathans. Instead, Britta's boyfriend, Anders has paid Drago to secretly take his place as he can no longer stand his own paranoia. No longer can he ignore the nagging voice whispering to him, telling him that Britta is cheating and somehow being unfaithful. It overwhelms him completely and blackly like drowning in a freezing sea. And so, since the only time they're ever apart is at work he has paid a surprised yet obliging Drago to assume his mantle and spy on her in plain sight, almost. His suspicions are only semi-correct though. Britta is loyal to him but she is also being lusted after by Anders' best friend, Ulf. And, by a swish of awful luck, Ulf can also contain himself no further and has paid Dorvan (slightly more than Anders has paid Drago) to take on his tail on the very same day.

So here they all are.

Britta is smiling, happy and utterly blind to the stalking powder-keg behind her. For most of the day there are no incidents. Anders and Ulf play their parts, one looking for proof that doesn't exist, the other waiting for a chance that will never come. But at twenty past three, when they've handed out all their leaflets and are on the way back to the office, fate gets mischievous. Ulf's girlfriend, Hannah, is on her way home when she spots Britta on the other side of the road. Hannah and Britta are firm friends, so she crosses over to say hello and while they chat she notices the trainers one of the Whales is wearing. They are brand new NikeiD's that Hannah designed herself and bought for Ulf's birthday only two weeks ago, so she is certain they are his. She peers in through the eye holes and rumbles him.

Her confusion is total. Why is he here? What is he doing? Ulf tries to bluff it out, claiming it's all a joke and he was actually waiting to surprise her but by now Anders has realised that his supposed best friend can have only one true motivation for being here, the same motivation as himself and instantly all the signs and suspicions of the past few months coagulate. There follows a bout of muffled shouting, pointing and barging. It's not easy to expose someone wearing a giant whale tail, especially when you are trapped in one yourself. There will never be a satisfying flourish as you whip off the mask, so Anders has to settle for ramming against his rival like a giant sumo wrestler as the girlfriends try to keep them apart and Britta tries to assure Hannah she knows nothing about any of this, whatever 'this' actually is?

But by then it is too late, they have reached the site of the whaling museum, which trumpets conservation whilst displaying past slaughter, and here Anders grabs a Narwhal’s horn hung above the entrance and attempts to harpoon Ulf. There is a thud and a crack, the ancient horn splits and crumbles, Ulf's costume is simply dented but the force of the strike is enough to knock both men off their feet and on to the ground.

They each lie there, helpless. Limbs flailing in the air like toppled, giant woodlice unable to right themselves. Britta and Hannah exchange a look then link arms and march away together ignoring all cries for help, swearing and apologies until the only sounds they can hear are the cries of the seagulls circling above, searching for food.

This is a tragedy of Shakespearean proportions. I CARE what happens to Ulf and Anders, dammit.

A signed first edition of the hardback plus the ebook