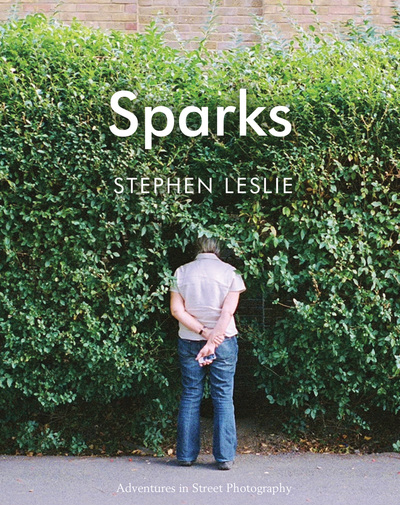 A family is brought to near ruin by a pet python, an Icelandic advertising agency has a problem with a campaign involving a dead seagull, a Chiropodist desperately wants to stop examining people's feet and dreams of becoming a Pirate. In India, a shopping mall owner laments the instillation of a new escalator and in Spain there are several possible reasons for a broken plant pot..... These are just a few of the many situations from SPARKS, a book that imagines the stories behind original street photographs.

I've always tried to take photographs that hint at wider, hidden narratives. I'm more interested in suggestive moments than decisive ones. So SPARKS is a book of photographs taken over the past 20 years that now each have an accompanying story. As far as I know this is something that has never been done before.

None of the pictures in this book were staged but most of the stories are fictional, apart from the ones that are about me. And even then I've almost certainly exaggerated and taken liberties. The great American photographer Joel Sternfeld wrote that 'photography...has gained a currency as truthful but photographs have always been convincing lies'. That's what SPARKS aims to do, match photographs with convincing lies that compliment and, even possibly, explain the images.

I intend the book to appeal both to fans of photography and also to fiction readers in general. Hopefully it will introduce people who don't know much about street photography to the genre while simultaneously allowing aficionados to see how fiction can arise out of street photography.

All of the photographs in the book have been shot on film, both 35mm and medium format. The finished book will be produced to the very highest standards and be a real thing of beauty.