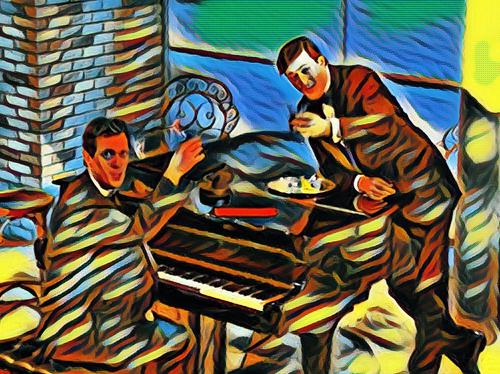 I bring momentous news, which is very much of the moment.

Today, Friday 19th May, the full manuscript of Soupy Twists, the official Fry & Laurie story, has been digitally posted over to the good people of Unbound for editing, fixing, and making into one of those books which I hear are very much not all the rage. What a birthday present for company co-founder John Mitchinson! And yet, the pain of the non-fiction writer, nothing ever pauses for one second – just after sending, this was announced: Cell Mates Revival – and we've had the sad cancellation of The Great Indoors only announced at the last minute, and Stephen's cameo in Veep! We're right up to the line on topicality with this one.

I would take up space here thanking everyone who has pledged, who has offered advice or even content, but all of those Acknowledgements will be in the book, so let's not waste precious pixels, shall we? I'll just say ta. You may recall agonies over just how much over the word limit the finished book was – a fortnight of very patient combing through and tightening up has reduced a 7k word excess to about 2.5k – it's the editor's job now to hopefully fit all that in. Fingers crossed, and I'll keep you updated on the progress as Soupy Twists travels from Word document to big papery thing tied up with string (String not included).

Another fillip is that this time last week I had a very long and extremely wonderful chat with Mrs. Jo Laurie née Green, who has fiercely guarded her privacy for over 30 years since first falling in love with a big blue-eyed ex-oarsman, and although she maintains her silence officially, as I knew she would, I was afraid that writing Soupy Twists was infringing on her privacy, and she may not like it... Reader, let me assure you, Hugh's other half is about as warm and lovely a person as I have ever happened upon in my years of writing these books. No doubt millions of women envy her, but you can certainly tell why Hugh picked her as a keeper! Now we've spoken, Jo will be able to help make this book as good as it deserves to be, providing some exclusive photos and such. So an extra grovelling ta to her.

I shall leave you for now with a truly extraordinary extract which had to be plucked from the manuscript to slim it down. I now only refer to it rather than quoting it, or including it in full in the archive section at the back (which will be a very small print digest, so short-sighted types, invest in a magnifying glass right now!). This sketch would have been written, ooh, any time between 1993 and 1996 (sorry to be so vague, all this material is salvaged from undated old corrupted files), but I think you'll agree, unless you're extremely stupid and/or argumentative, that it was gob-slappingly prescient work from Gadget Man Stephen – what will the world be like when video calls come in...? Nigel Havers, look away NOW. Everyone, make sure Nigel's not looking. And... read.

Until next time, if you have been, we are all blessed. 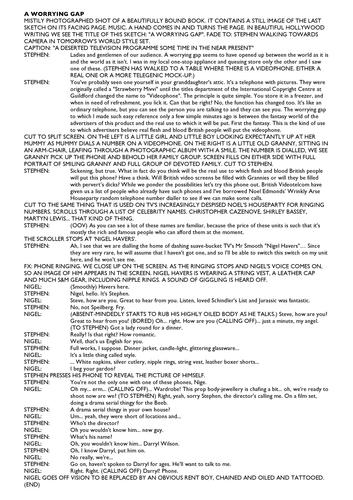