The Producer Said To Me...

Okay, wrong double act catchphrase, but I hope you'll forgive me for this mini-update: it's been a busy week of harvesting the memories and opinions of the two men who shepherded Stephen & Hugh through ABOF&L at the beginning and at the the end.

I'm indebted to Louis Barfe for putting me on to Roger Ordish, this lovely chap... 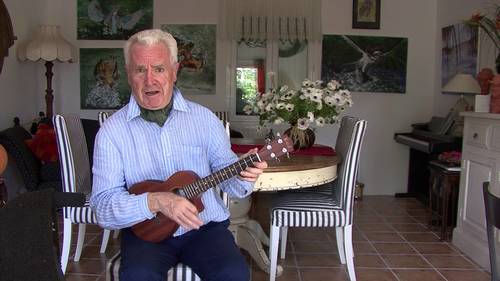 ... Who has of course had to field many far less pleasant questions in recent years, and it was a pleasure to share his warm enthusiasm for Fry & Laurie's work, and the respite they gave him from that other programme he worked on for so much of his career. Sadly, the hint I had been given that Roger had access to a tape of S1 and S2 outtakes proved to be a red herring, but besides his memories, he was generous to share with us all the special dedication Stephen made in his copy of the first ABOF&L script book... Thank you, Roger! 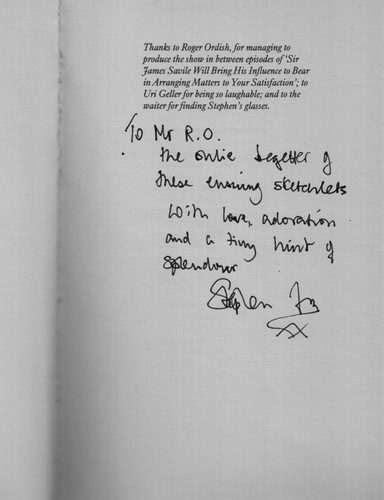 And secondly, having had trouble making contact via a number of routes, Stephen's sister Jo found an email address for the comedy Zeus Jon Plowman, who you may recognise from this off-duty photo: 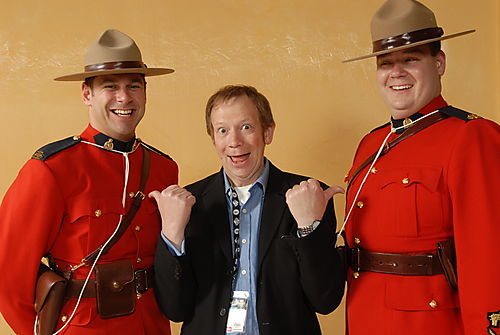 Jon also had no knowledge of outtake material, although there must be a fair share somewhere deep within the bowels of some BBC edifice. Just as a rough guess, given the evidence we have, between the four series of ABOF&L I would estimate there would be enough cut material – as in, studio-recorded sketches, not bloopers – to fill well over an hour of TV. That's obviously not including the 2 or 3 hours' worth of 'unseen' scripted material I have with me. Comparably, I think Monty Python have a few ripped pieces of half-sketch that would run to less than 5 minutes, because everything else has been released, facsimiled, and shoved into a book at some point.

It was a very relaxed chat with Plowman, and an honour as he's far from retired, and is a very busy man – this was his one afternoon off from producing the next series of Inside Number 9, which cropped up a few times in our conversation. In fact, as I don't think any of it will end up in the book, here's just a minute or so of our chat attached as an mp3 (eyes right!), where I'm trying to wheedle out of him whether the tone of ABOF&L S4 worried him at all (It didn't)...

It may help to show you a snapshot of my Soupy Twists interview folder below, as a visual guide to how the interviews are coming along. This doesn't include the people who have responded via email, like Deborah Norton, nor those pledged to at some point, Sandi Toksvig and Ben Elton. The saddest thing about the project for me so far is the unlikelihood of hearing from Tony Slattery, one of my adolescent heroes, for what can only be called 'Personal Reasons', as they are personal. Too personal for me to really know, but I have accepted his roundabout excuse note, and only wish him the very best, as I hope we all do. 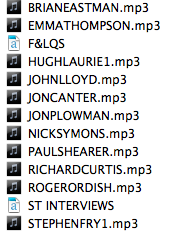 Excitingly, however, before the month of March is through I will be taking tea with... well, perhaps it would be best to have the tea before divulging. But as my narrative wends its way to the dark opening months of 1995, and the end of the Soupy Twists story, it does seem time to pump from the source at last.

Here's to pumping from the source,
Soupy Twists!