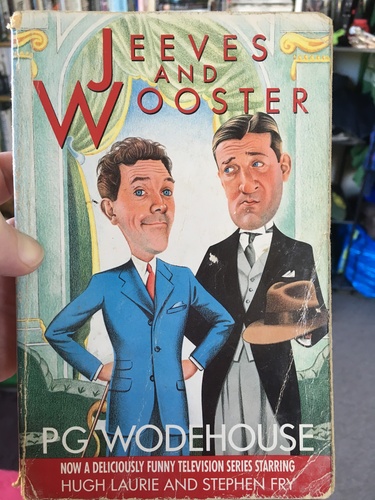 Tally ho, long-fingered young Soupy pledgers, with a bing and a bong and a buzz buzz buzz!

Happy Soupy Twists Friday. It has been an awfully long time since last I collared you, but then, little has happened – and September remains the apparent date for holding this book to your bosoms. The plate section is curently taking form, I am battling to include some text decorations which I feel will really add pizzazz, and as for my future, I have still not found a home yet for my planned next wonderful work of comedy non-fiction... and that's about the size, shape and girth of it.

Meantime, Stephen and Hugh have not failed to ceaselessly make their official story out of date, naturally – Hugh's confirmed as part of Armando Iannucci's new David Copperfield movie and Stephen has embarked on a new podcast project, which you can access HERE as if you haven't already.

But I have made an amusing discovery which I thought pertinent to share with you. The book above was maybe my third or fourth Wodehouse purchase, my interest in the Master originally wholly due to Stephen and Hugh and their agreement to personify Bertram Wilberforce and his brain-weighted valet. I was 11 when Jeeves & Wooster began, and over the following decade I ravenously tracked down and revelled in every single one of Wodehouse's 100+ books (though his early school stories have always been a grey area, and are by and large a challenge to enjoy, learning his craft as he was at the time). Anyone who knows anything about the great man's ludicrously fecund output will recognise the achievement here, especially as this was managed without access to Amazon, eBay and various online book emporia, it was purely through visiting bookshops and the like that I totalled the oeuvre, and of course a certain sadness entered my non-existent soul from the moment I realised I would never again read a Wodehouse novel for the first time.

Anyway, the reason for this impertinent bloggage is a testament to my adolescent obsession with the World of Wodehouse. At the age of 18, I embarked on a year out before attending university, at UWA Aberystwyth in 1997. The plan was to work in various factories, save up several grand, and survive all the better at uni. Sadly, it did not work out this way, and before I finally nepotistically landed a job writing Prima videogame guides at the end of the year (do check out my guide to Mortal Kombat 4, it's a doozy), I had many months of JSA-funded unemployment.

What does a glum teenager do in the Shropshire countryside when denied the ability to earn some of the necessary? Does he hang around on the Buttercross steps, swigging White Lightning and terrorising the populace? Does he stay in bed watching... what would daytime TV have been in 1996? I shudder to think.

No, he does not. He spends days painstakingly collecting all the canonical info he can from the Jeeves books, and puts together a vast family tree, covering the genealogy of both Bertie and, surprisingly, Reginald Jeeves, all in one. I mean, just look at it: 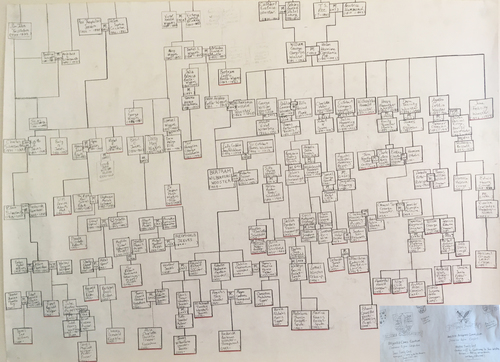 This is only an iPhone pic of the enormous piece of card I used, but it should just about be legible, to interested fans. I discovered this, unexamined for decades, rolled up inside a load of old posters, and couldn't resist allowing other eyes to see it for the first time ever.

Perhaps a few literary inaccuracies crept in here and there, but stringent attention to detail was shown in my younger exertions. Of course, it's 88% fan fiction, all dates totally surmised or imagined, and by bringing the bloodlines right up to date (to 1996), mixing in all manner of Wodehouse figures and dynasties – not to mention linking Jeeves and Bertie's ancestry AND combining their families via marriage in the next generation – perhaps I got carried away. My Latin on the family crest designs also no doubt sucks sizeable ones, but I had no classical education, unlike Bertie (and Jeeves, and Stephen and Hugh).

This may seem like an eccentric waste of any young man's time, but I did at least get to revisit the experience professionally, with a far greater devotion to canon, in my second book, THE TRUE HISTORY OF THE BLACK ADDER: 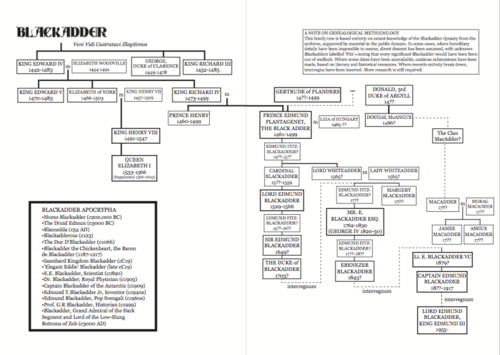 True, absolute purists may spot a few cheeky punts here and there even with this published genealogy – assuming the father of Captain Blackadder and so on, but generally this one is far more based firmly on the existing research on the Blackadder family carried out by Richard Curtis, Ben Elton and John Lloyd. It's probably in my Top 5 proudest moments in my career, I don't mind admitting.

But as you can see, we're nearing 30 years of devoted PG Wodehouse fandom from me, and as a member of the Wodehouse Appreciation Society and an avid reader of all books about him and his work, I have long wanted to fill a crucial gap in the market, by writing a lovely big glossy book all about the many adaptations of Wodehouse to the screen. Soupy Twists contains the most detailed history of the Granada Jeeves & Wooster series ever released, with new input from Brian Eastman as well as S&H, but just as my Blackadder book contains the seeds of Soupy Twists, with a potted Fry & Laurie history which I have now finally been allowed to explore in more detail, so Soupy Twists' J&W narrative could be fleshed out massively in my planned book, 'Wodehouse's World'. It's not just about J&W, or 'Blandings', or the surprisingly few other attempts to bring Wodehouse to the masses, it's also all about the adverts, the ornaments and knick-knacks, musicals, basically every element of Wodehouse's universe, OFF THE PAGE. There was one very dry academic book on 'Wodehouse on Screen', which I found a pain to get through, but I aim to cover that territory in a juicy, fizzy, entertaining way.

If there are any sane publishers of comedy/literary non-fiction out there... Pip pip! 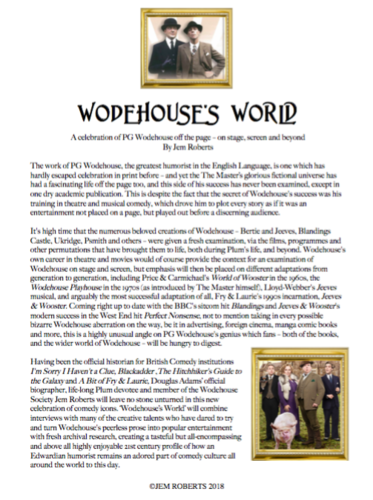 That family tree is fantastic, and though I am neither sane nor a publisher I would love to see Wodehouse's World come to fruition. Good luck!