The Ballad of Neddy Muldoon 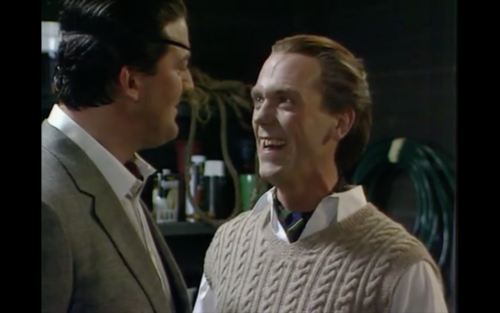 Folk keep asking me how the book's doing, but in real terms, authors only find this out once every six months, when royalty statements arrive and depression sets in. So far we have five positive Amazon reviews, lots of lovely feedback, and only one disgruntled pledger annoyed about the lack of Hugh's signature (please realise, it's due to a change in Hugh's personal management, and there's nothing I nor Unbound can do but keep faith and nudge Hugh's PA as often as possible, in the hope of delivering eventually). Besides an interview with Talk Radio next Tuesday, we've run out of publicity, so anyone out there with a relevant podcast, or radio producers, or indeed any way you may have of amplifying our cries of 'THIS BOOK IS QUITE NICE AND YOU MAY ENJOY IT' – please get in touch at jem@jemroberts.com.

As for those in the book, Stephen's sister Jo has been lovely, and even moreso his wonderful student partner Kim Harris has been in touch with the most moving praise. Kim's submissions to the book were so glorious, I have advised him to expand them into a full memoir, and I believe Stephen agrees. Kim had read the ebook twice before I could send him a proper copy, and it would be conceited to repeat his praise, but it means the world to me. I don't expect Stephen or Hugh to read the book, it's an ego minefield, so although Fry and Laurie have always been on board this official project, the opinions of their closest friends is the closest I can get to full approval of the finished product. Of course, neither colleague has yet acknowledged the release, but Fry's Twitter profile in particular is under non-stop seige, and he has 'Heroes' to promote too... as his official joint biography, surely our time will come.

However, Kim also enthused about the book to Nick Symons, one-time ABOF&L producer known to you perhaps as 'man in glasses' in the studio audience for the Strom sketch. Nick has also been full of pleasing praise for Soupy Twists... but in addition, blue-pencilled his way through in a sadly belated fact check. I'm glad to say this largely resulted in just a few tiny issues which almost nobody would notice – Hugh lived in Tufnell Park for a while, not Camden, and so on. But he did also point out two ridiculous mistakes on one page, in the plates. The photo section didn't go through half the rigorous checking of the main body of the book, but that's no excuse, and I take full responsibility for this worst brain-belch of all: 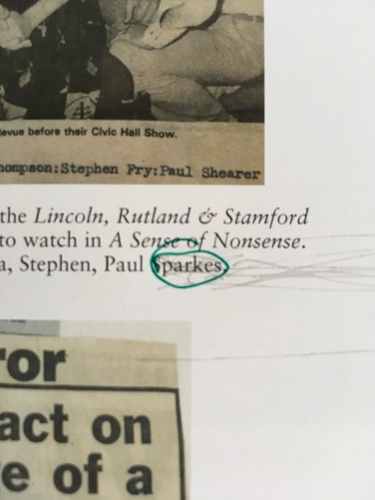 HOW DO THINGS LIKE THIS HAPPEN? And why, of all people, did it have to be the lovely, underappreciated Paul Shearer whose name was mistaken, directly beneath an archive photo which specifically names him correctly? I'm sure I had been discussing fellow underappreciated comedian John Sparkes when writing the captions, and the totally random, heartbreaking, self-sabotaging brainwrong just jumped in there. And nobody caught it, but it's still my fault. I'm so sorry, Paul. This, and a few other small glitches have already been sent to Unbound for fixing for every edition from now on, and eBook. It could of course have been far worse, but you will never know just how this kind of completely inexplicable mistake is a dagger to my guts. It's one thing to make an error through lack of knowledge, but when it's something you know perfectly well, and yet somehow your internal gremlins have just fucked something up for you... that's the one that really stinks. Mea very culpa.

On the other hand, that does mean the real meat of the book is as flawless as you can get, plus, just as I was weeping into my wound about all this yesterday, I watched Richard Herring interview Alex Horne about his new book, and both shared their agonies of first edition typos and errors RIGHT HERE – and as they are both better men than me, I felt a little better.

Whether this will ameliorate my error I do not know, but here's a wee something for you all which may raise half a grin. Hugh Laurie, it need hardly be said, is very much alive, which is lovely, but he's now so divorced from his own comical songwriting, the discovery of his old ABOF&L-era song lyrics feels as exciting to me as discovering lost Lennon lyrics. And so, as Billy Bragg was to Woody Guthrie, I have been moved to fit music to Hugh's abandoned songs. In particular, I have always had a soft spot for the Muldoon brothers, Freddie and Neddy, murdered by the villainous fascistic 'Cause'. And so, finding an unfinished 'Ballad of Neddy Muldoon' in the ABOF&L archives was an astonishing treat, and inspired the construction of a few folky, bluesy chords to let the sad tune sing out 25-odd years after Laurie abandoned it, in tribute to the shortest-lived Prime Minister in British history. It was missing a line, but rather than add to Hugh's words, I thought I'd borrow one of his lines from another song...

And so, with Fry a safe punching distance away, I give you my interpretation of The Ballad of Neddy Muldoon. We shall not forget. Although most of us do not remember. 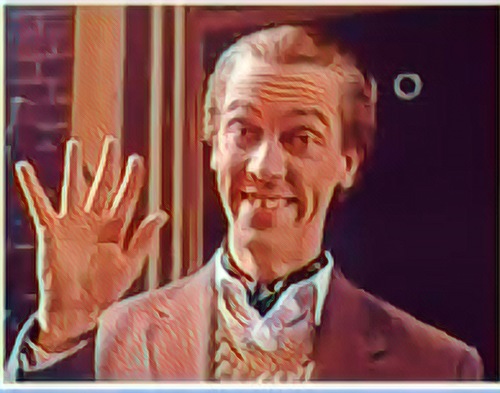 Great interpretation of the song, Jem. The unseen bits of Fry & Laurie are wonderful to read. I still love reading the first two volumes of ABFOL sketches, and love the fact you carried on the random caption gag in Soupy Twists.

Hi, this is really random but even though I pledged, my name doesn't appear in the back of the book (that I can see...!)...