Hello, ladies and non-ladies, and to a certain extent also, HELLO!

I'm not entirely certain of how long we can go on having extra blogs added, now most of you have probably already read the entire book, but it's been a busy time introducing the world to Soupy Twists, and so we have a great deal of housekeeping to do. But at least we can do it with vim. 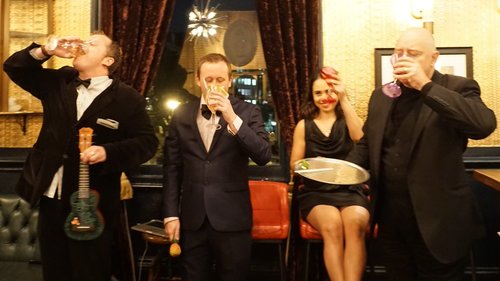 Yes, on Wednesday 12th September I was aided and abetted by Paul Gannon, my comedy colleague for many a year of yore, and now noted podcaster with @Cheapshow and more – plus the magnificently talented Torchwood and Hitchhiker star Samantha Béart and Toby Longworth, whose credits include starring with Stephen Fry in Extras, and radio show Fry's Planet Word. Together, we convened in London's occasionally fashionable Clerkenwell to present a virtual episode of 'A Bit Of Fry & Laurie' that wasn't, to launch our wonderful book amidst delightful pledgers and fans. In fact, the hour-long show and subsequent sticky cocktail-glugging presumably formed the closest thing there has ever been to a Fry & Laurie fan convention – and there was much rejoicing. 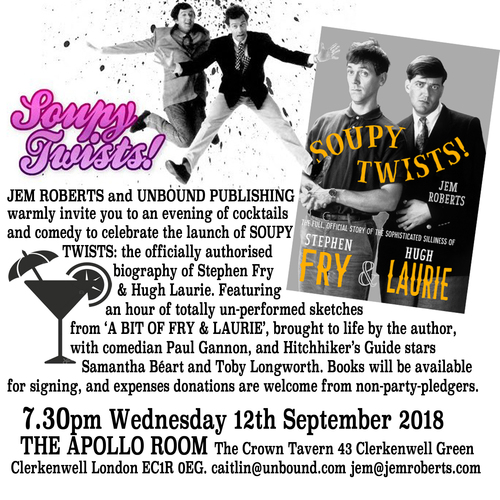 And you can listen to the audio of the event RIGHT HERE! I'll keep the link up for a few months, so grab it while you can!

Folk kindly also uploaded the odd bit of video for those who like to use eyes as well as ears, and you can find them HERE and HERE (Thanks, Trevor!) and also HERE (Thanks, other Paul!). 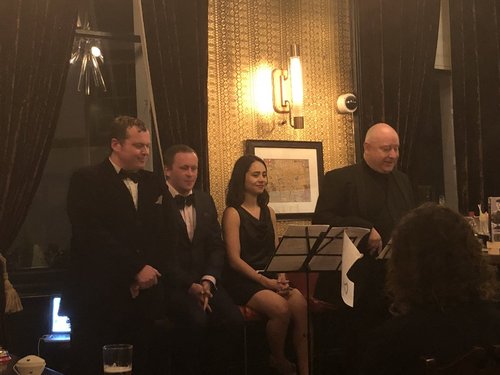 Early feedback on the book is thankfully glowing, though no word yet on professional reviews – unless I'm being protected from them. Never mind, your opinion will always count for more, so PLEASE if you enjoyed the book, speed to those tax-dodging types at Amazon and share your stars and reviews (you can buy it more ethically HERE), it means an annoying amount that it's well received, if I am to write further books. You can do the same on Goodreads, but the place terrifies me.

And as for further coverage, if you are tired of life enough to hear me talk more about A Bit of Fry & Laurie on BBC Bristol, I was first guest up on Monday's show HERE!

(Oh, and as a Froody aside for Hitchhiker's Guide fans, my Great Lives episode, in which I nattered with the great Mark Carwardine about Douglas Adams is on Radio 4 HERE or as an extended podcast HERE!)

I have podcast interviews ahead, and something on Talk Radio, but we're still keen for any kind of word-spreading we can manage, so if you hear of any opportunities, do get in touch at jem@jemroberts.com!

But for now, and best of all, to further my radio adventures, my 4xtra natter with the comedy deity who is Arthur Smith starts later tonight at ten to eleven...! Should be somewhere in this region: HERE. Mr Smith may not be the first name you think of in connection to everyone's favourite Footlighters, but it was a real pleasure to spend more time with such an Alternative icon, and we're both on the Bath Comedy Festival board, so it was good to catch up... 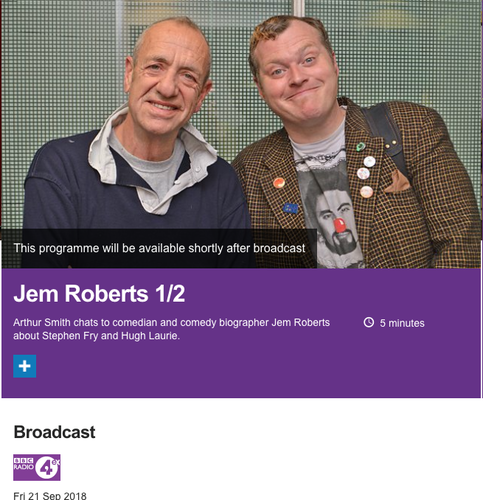 Oh, and on the subject of pledge honouring – if you pledged to get copies signed by me, Stephen and Hugh, it's true that Hugh has lost himself in a new movie project and sadly not yet supplied his signatures – nobody's fault, least of all mine or Unbound's – but we're doing all we can to get them, and won't give up, but may send your copies without Hugh's signature first, and as there are only 15 or so, we can post them off when we do get them. Some of you also pledged to come to Bath and have cocktails with me, you mad lot – just get in touch when you'd like to sort that out and I'll do all I can to not waste your time! Thank you so much to everyone who did pledge extra for any reason at all, though…

Oh, and finally, if you're concerned that neither Fry nor Laurie has yet commented on the release of their official joint biography… well, now I finally have my box of books and two minutes to rub together, it may help when I get a moment to post their copies off to them. To the Post Office I go! 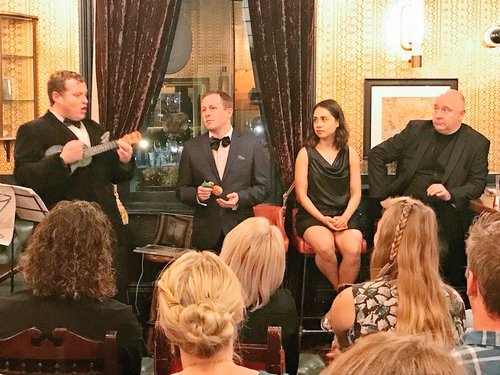 See those faces. You can hardly blame them...

Is there any way to find out when Unbound will send out my copy (A Bit More Fry & Laurie pledge level)? Thanks!

i got the book today but not the abit more section. hopefully thats coming seperately and isn't just a pdf (£100 for a pdf is a bit steep)