Weeeeeeeeell, my dear old Soupy supporters, as the old adage goes, all finite things must come to an end, and the Soupy Twists odyssey has gone on far longer than anyone could have predicted back in MAY 2016 FOR GOSHNESS' SAKE when the crowdfunder was first launched. We have passed the original 30th anniversary for which the book was intended, Boxing Day 2017, and last Sunday also marked the other crucial anniversary – the first broadcast of A Bit Of Fry & Laurie S1E1 on BBC2 at 9pm.

As a final hurrah, hurray and hurroo, and to mark the glorious occasion, I rose from my sick bed to take part in two events for ABOFFLERS the world over, flying between London and Bath like a kind of unseen-comedy-sketch-performing Phil Collins... 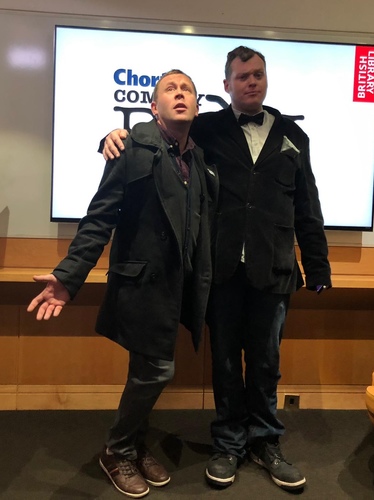 First of all, I was chuffed to stage a return to the Chortle Book festival after a few years away, especially as this time it took place at the British Library – a gig venue anyone should be glad to add to their performer CVs – where I reunited with my one-time comedy colleague Paul Gannon to perform a few bits and pieces from the unseen comedy archives which have appeared in my books.

We merrily mangled a SNATCH of Blackadder In Bethlehem, the opening sequence from the unmade Hitchhiker's Guide to the Galaxy TV series 2, but above all, of course, there were lashings of sketches from the Fry & Laurie archive, including a couple of exclusives not performed elsewhere – the odd squib Oster Milepiece and a lost Spies sequel. It was a raucous and unrehearsed hour, and a few highlights, as recorded by the wonderful Denise Hoelandt (as are all photos here) have been uploaded to YouTube for you to thumb down – just see above. Thanks to everyone who came along, and indeed to Paul, and his dancercising. 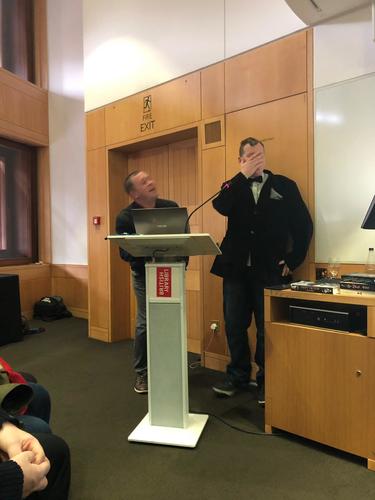 It was great to get to meet some of you and sign some books, and see a bigger stack on sale outside, right up against Taskmaster – and we managed to hold our own against little Alex Horne's event anyway, despite that being the biggest draw of the day. After all, our show also featured a large, cruel overbearing Salopian with a hairy little more likeable sidekick too, so screw 'em. 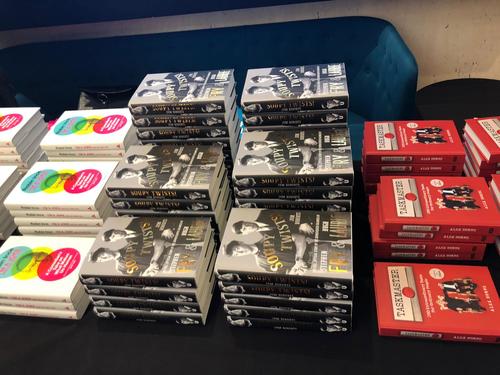 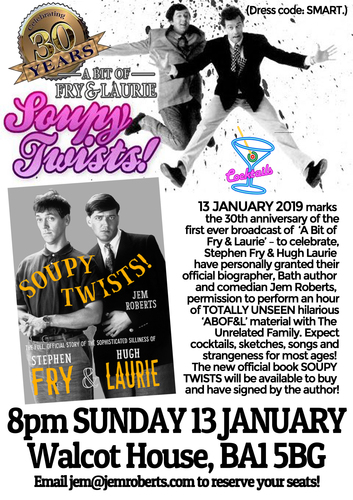 Anyway, having zoomed across England's lap back home to the Sou'-West, it was off to the sophisticated locale of Bath's Walcot House cocktail bar (NINE QUID for a mojito?), for the sequel to last September's live book launch – this time with a brand new cast, including superb stand-up Laura Ollerton (one of the original members of The Unrelated Family, the comedy sketch troupe-cum-ukulele rock orchestra I set up in 2006 after parting brass rags with the aforementioned Gannon and going solo), and fine local actors Sam Fynn and Gemma De Carteret, both regulars in my very strange theatrical pursuit Unrehearsed Theatre.

This time we had rehearsed, a bit at least, and despite my flu-ravaged voice tearing itself to bits by the end, a lovely time was had by all. Oh, and of course let's not mention my massive over-acting when getting shot in the drug dealer sketch, which resulted in my falling on my precious beloved electric uke and snapping it in two, which was both an expensive misfortune and a bit of a show spoiler given that there were two more songs to perform before the end at that point. When you hear me say 'let's have some satire' halfway through the recording below, that is the sound of a broken-hearted performer doing his best... But yes, let's not mention that. 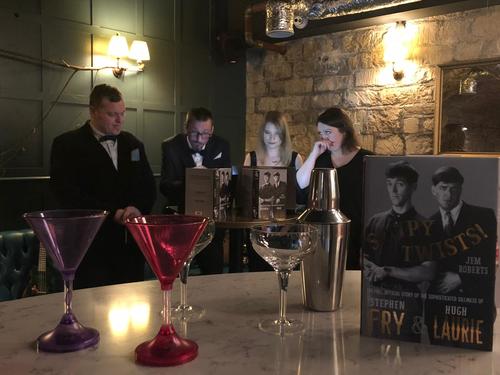 Aaaanyway, with careful editing, please find below a condensed version of the evening's entertainment, complete with dubbed-on uke, and I have to thank Stephen Fry for giving us express personal permission for staging both events – of course, all shows were free, so there was no direct profiting from performing Stephen and Hugh's material, and we're not about to make this a regular thing, it was a one-off 30th anniversary shindig... though do keep an eye on the Unrehearsed Theatre page for future unconnected shows, with some fun plans in place for a Comic Relief special in March...

Here's both live shows in audio, over two hours of unperformed Fry & Laurie material, brought to life after over 20 years' mouldering in the archives, and I couldn't be more proud to have led this officially endorsed romp through the two colleagues' archives – thank you Stephen, Hugh, Paul, Toby, Samantha, Ness, Sam, Laura and Gemma! 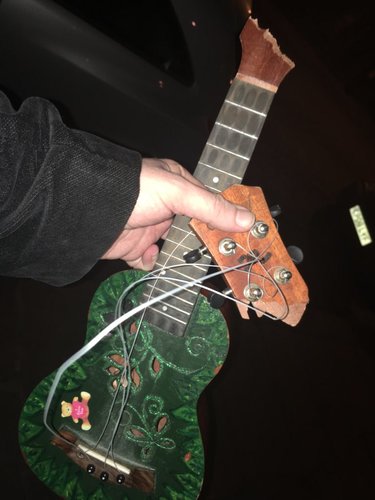 So there, if you have it, you have it. My work here is pretty much done – a few pledge rewards remain unclaimed, but you know where to find me should you wish to honour our agreement. There will of course be a paperback out this autumn – and whether it will require any updating, we shall have to wait and see, I would hope that if Stephen and Hugh were to reconvene in any meaningful way in the next several months, I may be allowed some kind of insider view...

But whether that happens or not, I can now proudly say, with tears streaming down my mug, that once upon a time there was no book celebrating the wonderful sophisticated silliness of A Bit of Fry & Laurie, and now, there is. Stephen & Hugh's books were always a source of the greatest pleasure for me, and now I have personally added to them. And though the book's cover may have been a bit of a departure, here's a thing – if you slip off the dust jacket, and put the book alongside the other Fry & Laurie offerings, they have the exact same pleasing white-with-gold lettering, making them undeniably part of the official set: 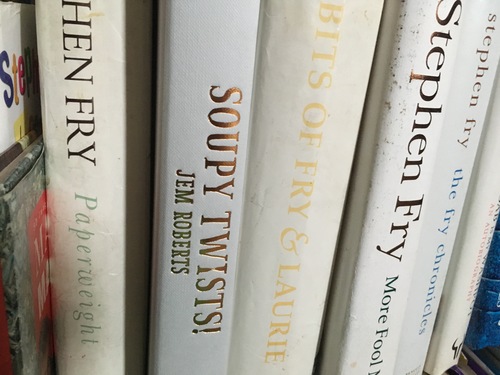 But tragically this will be the very final Soupy Twists Friday, and the final blog – how far we've come, from that Brexitless land where first we put our best foot forward, embarking on this comedic odyssey together. For any further updates, please do check out my personal blog over at JemRoberts.com, where you will also be able to find out about my next work of comedy history, which I'm 7,000 words into writing, and planning to launch as another crowdfunder later in the year, when all ducks are in a row and ready to be shot through the face. And if you'll forgive me being perfectly gross, it would be remiss of me not to add that if you have enjoyed my prose in Soupy Twists, my brand new book with Unbound, TALES OF BRITAIN, is released ANY DAY NOW, and though it's a bit of a world away from comedy non-fiction, this is the first British folktale collection to be released in over 30 years, and is in tribute to the great storyteller Terry Jones, and infused with the Grim Tales spirit of Rik Mayall, so hopefully it is packed with laughs anyway. Maybe I'll see you when performing these tales up and down our fine island.

If you have been, farewell. You've been gorgeous, you've been supple, you've been surprisingly well-lubricated, and as a wise man once said, you will never understand how much I love you.

Thank you for coming along with me on this very silly journey, and of course, SOUPY TWISTS! 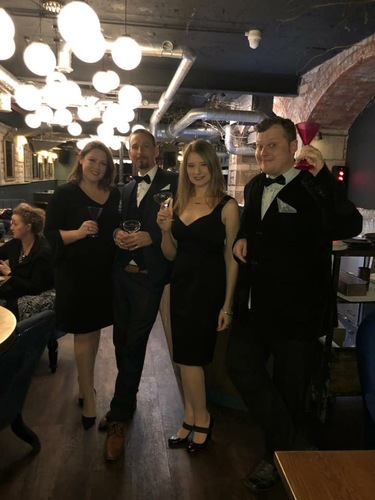