Two months after release, winding down on author duties, I find one reviews the stacks of research data amassed on the old harddrive, and feels duty bound to be a little more generous with some of the rarities one has happened upon. So please find attached a sample of highlights from the two episodes of Friday Night Saturday Morning helmed by the Cambridge Footlights team in 1979 and 1980 (leaving out the wife beater sketch and the blacking up, I just don't need the Comment battles). I do hope I don't get into trouble for uploading this meagre footage, but it'll soon be whipped offline if so; it's intended purely as an early Christmas present for my very attractive readers.

Perhaps this blog should have folded in on itself and disappeared up a particularly tight aperture by now, but we missed a rather important update. You know, just one of those near-silent but seismic Soupy Twists which come too late in the tale, and somewhat leave one looking pret-ty silly... 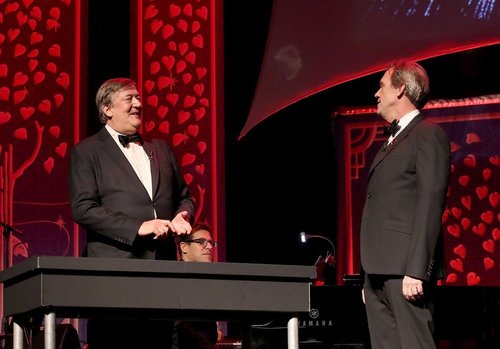 When The True History of the Black Adder was released in October 2012, it ended with a detailed summary of all attempts to bring Edmund back to life, and a lengthy wondering what the future might hold. And within weeks of the book hitting the shops, Rowan and Tony were performing a new Blackadder sketch by Ben, BANK ADDER, for charity, live on a London stage. And then, to add further embarrassment to the first edition, shortly after, Bladder and Balders were at Buckingham Palace to pick up shock Honours.

Here's proof that the same shit can happen to the same guy twice.

No, shush, obviously, that would be churlish, and it was all for a good cause – as reported on Hughlarious – the colleagues teamed up for their first public sketch performance of the century in aid of the charity Children's Network, at a live London show called Serious Fun, of which I was utterly unaware, or obviously I'd have been there with my hair in braid (or as best I could braid it). I claw back some comfort also in that they performed their traditional drop-of-a-hat-oh-and-a-counter-with-telephone-is-also-essential charity item, The Hedge Sketch, as shown in Soupy Twists. And so the deep disappointment of not witnessing the exact reunion that the last few pages of Soupy Twists ache for is at least hugely tempered by not really missing any fresh F&L material. The two of them going through those old familiar motions does bode well for a proper reunion though, and if plans are firming, I only hope they become firm enough to mention – or perhaps even witness – before I can update the text for next year's paperback release.

Oh, and then this very week, there were further developments. It's been a week of miraculous, comradely good news, so of course we had to share at last... 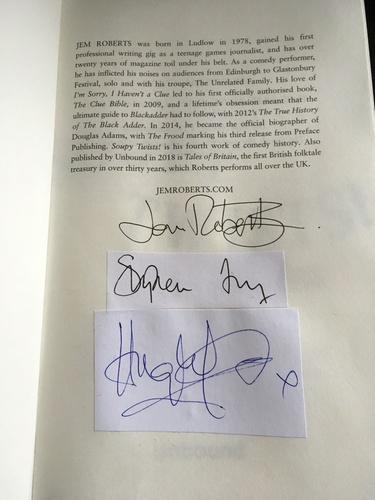 Those of you who pledged for the signed copies of the book can now expect to complete your autograph collection ASAP, Unbound are posting them as I type. I think I'm relatively right in saying that concludes all of our pledge promises – besides those of you still to claim your cocktail meeting with me, you gluttons for banality. (Just jest, I will prepare some rare material to share with you when you visit – let me know when you're ready to come and have a drink!)

Oh yes, and also apparently the dear chap picked up a gong from ultimate comedy fanboy Prince Charles this week too – a CBE is one rung below Sir Tony Robinson, and on a par with Rowan Atkinson CBE, so top hole all round. It's always jolly to see Hugh smiling when the pleasure he's feeling is clearly uncontrollably sincere, shining through his natural embarrassment at receiving any form of honour, so this is a truly gladsome sight. As for Mr Stephen Fry's feelings about Honours... well, that's in the book, if you have yet to purchase one... 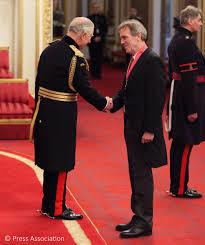 AOB for ABOF&L – no matter what their subject matter, even a podcast agnostic like me wouldn't flinch from recommending the learned and friendly RULE OF THREE cast, presented by Jason Hazeley and Joel Morris, who chat to a professional comedy-type about their own comedy loves, and this week Margaret Caybourn-Smith revealed her teenage obsessions with ABOF&L, sensible person that she is. They were kind enough to slip a modicum of cred Soupy Twists' way near the start of the second half – and it was a great pleasure to hear elements of my weave of the colleagues' combined story influencing their chat as it developed; I definitely recommend a listen.

Finally, although I have yet to request any tacit nod from Fry & Laurie – which I obviously always would do – plans are afoot for a Bath book launch at a swish cocktail bar to mark the 30th anniversary of the very first broadcast of ABOF&L S1E1 on Sunday January 13th. As with the London launch, the hope is we can give a reading of unperformed Fry & Laurie material as part of a free cabaret, but with books on hand to buy and get signed. It won't be a commercial event, we're not aiming to make money out of the colleagues' material, just to mark the anniversary with a private cabaret of songs and sketches for F&L geeks and Soupy Twists readers, details of which should spring up on social media arenas in the coming weeks. There will be cocktails, of course.

Bring me lobster on a clean plate. 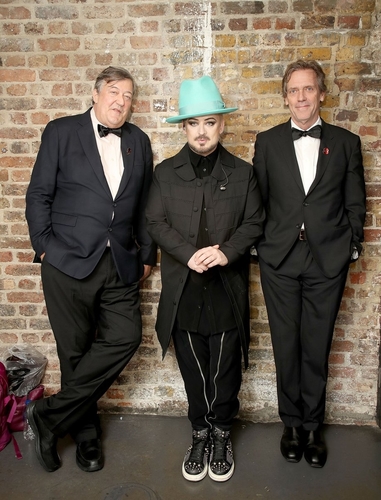 “I and everyone at Unbound was astonished to find that anyone bright enough to love Fry & Laurie and want their official book could lack the requisite nous to forgive the obvious impossibility of getting these two chaps to sit down with a stack of books and sign them.”

You and everyone at Unbound seems to “lack the requisite nous” to realise the difference between the signed book you clearly sold people and a standard one with signatures on desultory little stickers.

You also don’t seem “bright enough” to answer repeated mails about it for weeks until you’re embarrassed in to doing so on Twitter.