No Point Going At It Half-Cock...

... Whereas, going at it full-cock is for me a lifetime's habit. Hello, a very warm Eostre to you, and welcome to what will almost certainly be the penultimate entry in our SOUPY TWISTS series of blogs, before the full draft manuscript is bicycled off to the Unbound experts in their Islington offices for editing, enjoying, and generally squeezing between chunks of paper.

Because, oh! but what a hectic time it has been since last I be-blogged you all – not least thanks to the Bath Comedy Festival and its many duties, but now I have to tell you, I am fundamentally one decent day's work away from having a completed draft of SOUPY TWISTS, leaving just a couple of weeks' editing and tightening and straightening and all the other things manuscripts demand, before I can hand it in and await marking.

As you can see from my current Interviews folder... 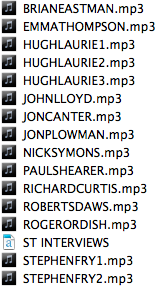 I have finally had the honour of making a supermarket dash around Stephen and Hugh's brains. There should still be one final grey-area-removing rendezvous with both before the book is sent off to the printers, though they will be back 'home' in California by then. We have enjoyed the singular pleasure of having both Fry and Laurie on British soil in recent weeks, however, and first I spoke to Hugh on the phone from his new rural idyll. In fact, as we had barely scratched the surface after two hours one Friday morning, he phoned me up the next morning for an interview of even greater length, which was extraordinarily kind of him.

It was only a week or so later that I met up with Stephen in the exact same swanky locale where he had greenlit Soupy Twists 14 months earlier, for a couple of hours' interrogation over a few drinks and oysters (I never had the latter. Bivalves escape me as a foodstuff and I had already hurled once that morning). Of course, unlike Hugh, Stephen has written three lengthy instances of memoir, so there were far fewer grey areas to cover in person.

Despite absolutely loathing autographs and selfies and such, I felt I owed it to you dear Soupy pledgers to get some proof of our meeting, and despite my number of chins, inability to locate the lens, and a definite visual suspicion that I had just eaten the late Harry Secombe whole... here you go. 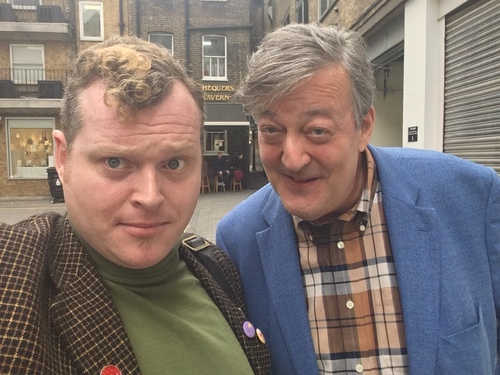 But I feel you may be more interested in the linked audiofile, up there. I've selected 6 or so minutes from lunch with Stephen, and the same amount of chat with Hugh, and pasted them into one short eavesdropping. I think these sections are interesting, but unlikely to make it into the book, so they're fine to share. The book, after all, is currently somewhere in the region of 22,000 words over my original contracted word limit...

And I am still adding further interviews all the time, like the fresh Robert Daws chat which occurred just this week – what a lovely fellow, not at all the asshead Tuppy Glossop always was. Obviously. Buy his books!

Until this manuscript is ready to send, then, all I can say is... Language is my mother, my father, my husband, my brother, my sister, my whore, my mistress, my check-out girl... language is a complimentary moist lemon-scented cleansing square or handy freshen-up wipette. Language is the breath of God. Language is the dew on a fresh apple, it's the soft rain of dust that falls into a shaft of morning light as you pluck from an old bookshelf a half-forgotten book of erotic memoirs. Language is the creak on a stair, it's a spluttering match held to a frosted pane, it's a half-remembered childhood birthday party, it's the warm, wet, trusting touch of a leaking nappy, the hulk of a charred Panzer, the underside of a granite boulder, the first downy growth on the upper lip of a Mediterranean girl. It's cobwebs long since overrun by an old Wellington boot.

Jem- Very much disagree that your number of chins is excessive. Otherwise, love this post!

What a fantastic posting! I'm very much looking forward to making my way through the mp3s, and can hardly believe this book is so close to print — I simply cannot wait to read it!