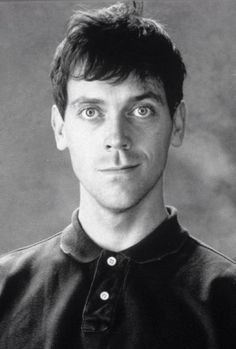 This isn't much of an update, but it had been bothering me for a while that this sketch wasn't online as a standalone piece, and to my mind, this is the funniest 38 seconds of wordless comedy in the entire history of funny things. Even without the punchline.

And all down to Hugh Laurie's face... and, admittedly a very amusing wig. In fact, I feel it deserves a GIF to go with it:

I wouldn't hesitate to draw parellels between Hugh's physiognomy and that of Buster Keaton – it's a wonder they've never built a biopic around them. With those features, and that physicality, Laurie could have been dropped into any silent comedy studio at the start of the last century and become a legend.

I'm aware that a lot of you lovely supporters have come to this book from a love of House, and I wouldn't hear a word against that frankly brilliant series. But it's one of the main aims of Soupy Twists to provide a permanent record of the all-too-easily forgotten fact of Hugh's comedic brilliance, totally separate from Stephen's own brand of comic excellence, which has always been to the forefront, due to his sheer profligacy of talent. But as his colleague has always loudly insisted, Hugh's talent for physical comedy has always stood alone, far beyond his own skill in that area, with words being, of course, Fry's metier. Nowhere is Hugh's skill more in abundance than in this balloon animal quickie, it's a sublime sub-minute.

It's also essential to this book that I sing Hugh's praises as a comic songwriter, which I was glad to get to discuss with him in person – I did my best to assure him that songs like 'Little Girl' and 'All We Gotta Do' belong in the echelons of Lehrer and Wood, and that funny songs are not a cheap novelty side-genre, but about as specialised and difficult an artform as can be imagined. Anyone can twang a tune with asinine lyrics, but to write and perform a catchy song that is also packed with gags, is far beyond the skill of 99% of the world's musicians. I'd like to think I sowed a seed which may see Hugh performing more original material with the Copper Bottom Band, live and maybe even on record. His brand of compassionate satire could do a lot of good in this naughty world. But we'll have to see if he takes this on board.

But, as I say, it's his personal comic voice and – obviously – face and body which I fear is in danger of being put out of mind by his international success as a straight actor, and I would take these 38 seconds above all the many hours of TV he has created in the last 20 years. You have to recognise the distinct qualifications that go into the overused term 'genius' in any artform, before daring to trundle the word out. And having done that, I will now employ it: Genius.

Oh my, it's a dachhund named Colin, one of the 6 inhabitants of the borough of Dunny-on-the Wold!

Hi, I find it interesting that you compare him to Buster Keaton because I keep thinking of Stan Laurel when I see some of Hugh's work.
Again and again.
Hugh is the master of silly faces.
He would have been great in a biopic of Stan Laurel!

P.S.:
And as much as I love Blues and Jazz ... and listening to Hugh performing those genres ...
I think "Mystery" is his masterpiece.
Good funny songs are underrated indeed.