Hello, and Welcome To 'Judging A Book By...'

Or perhaps, 'How I Learned To Stop Torturing Myself and be a Froody Author'.

As it's Towel Day, I should have blogged about Fry & Laurie's friendships with Douglas Adams, in the hope that some of you who haven't yet blessed your bookshelves with my last book THE FROOD (which mentions both colleagues a fair bit) can finally make up for it. But you've all been waiting so long for this dear and blessed book by now, I probably already have, at least once, and besides, it's quite a big news day for me, because...

I say, here's fun – the Soupy Twists cover has finally debuted to the world. 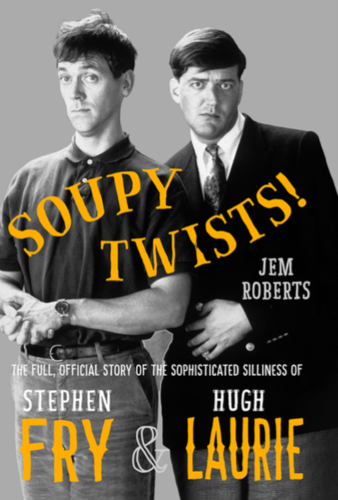 Well gosh, look at those fellows. And their strange faces.

With the best will in the world... you could bequeath THE MOON to ALL THE WORLD'S CHILDREN! … Sorry, I mean to say, with the best will in the world, I am deeply proud of Soupy Twists, and obviously want as many folk as possible to buy and enjoy it, but this is not quite how I personally envisaged the Soupy Twists cover. I had originally hoped for a colour image of Stephen & Hugh (in an ideal world in full 'Soupy Twists' mode, raising a cocktail glass to the reader, inviting them to pick up the book and have a good time), against a plain white background with gold lettering, and in general, for this book to fit perfectly alongside the existing ABOF&L books as seamlessly as possible.

And yes, dearies, I am aware that the colleagues are the wrong way round. But shush. Snark hath no place here, this is the cover of my 4th book, it's a tremendous treasury of comedy brilliance, and it's a book I will be doing all I can to sell and publicise and massively enthuse folk about wherever and whenever I can throughout this year, and particularly in September, when it hits the shops (If you can help with publicity, by the way – local radio, newspapers, any chance to discuss Fry & Laurie's official story, email jem@jemroberts.com and I'll be there).

But I have one overriding reason for embracing this quirky cover, presented to me as a fait accompli as it was, and even though I did have an ambition not to write a book which was largely grey, and that is… I HAVE A HISTORY OF BEING GRAVELY WRONG.

You see, my first three books were all published by Preface/Arrow, an imprint of Penguin/Random House and ironically, that huge conglomerate of commercial publishing gave me all the input and power I desired to shape the look of my books. Here follows a little breakdown of how the design of each of my books was at first amateurishly suggested by myself, then a different look was presented to me by the company, then I worked with them to reach a compromise which made us all happy...

THE CLUE BIBLE:
Originally 'I'll Read That Again', then 'The I'm Sorry Bible', the Last Supper image my first book ended up with was not my idea, but I suggested all sorts of changes, adding ferrets, streamers, kazoos and the like into the image – I also battled to get Bill Oddie on the cover, with no luck. But it was a very pleasing bit of work by the time the book came out:

THE TRUE HISTORY OF THE BLACKADDER:
I had several rough ideas of how I'd like my Blackadder magnificent octopus to hit the shops, as you can see, but then Preface wanted it to look totally different, i.e. like this: 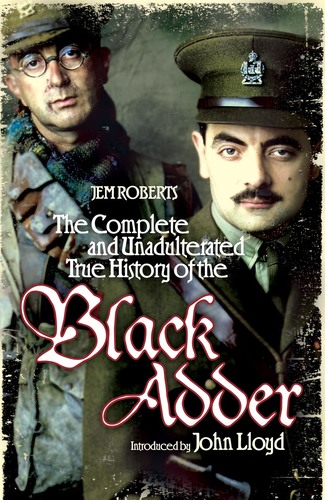 But I said no, 'Goes Forth' was not the focus, and I wanted something more in keeping with the Olde Worlde title, a Blackadder II cover, and those kind designers came up trumps for me, both in hardback and paperback:

My official Douglas Adams biography perhaps involved the most wrangling before its release in 2014. My very first image was, admittedly, something I never expected to actually get onto bookshelves, pretty though it was: 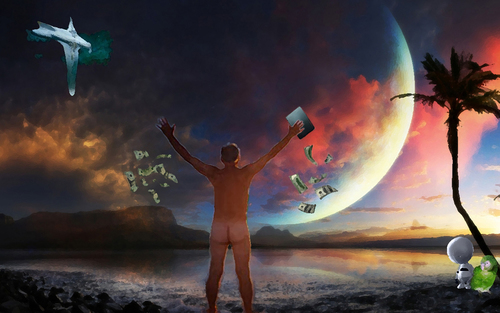 But as the following link shows, after a rather lacklustre original suggestion from Preface's designers, I worked very hard to tug the cover design over to my way of thinking – the very least, I begged, was that Douglas' face should be on his own official biography. And so, you can see how it evolved into something which pleased us all – and again, all the moreso by paperback:

And now, here we are with the official Fry & Laurie book, published with an author-led publisher... and I have to say, the cover is something entirely other to me, I have had no hand in it at all, it feels like another person's child I am having to work to send to Eton and I'm not that sure about their smell…

But here's the kicker – all my previous books failed to reach even 30% of their audiences. And now Preface is no more, anyway. The Frood still has to make back my 2013 advance, after a third of a decade of sales, and was only translated into Portuguese. I have been trying to get a publisher to reprint the Blackadder book for the 30th anniversary of 'Goes Forth' – using the exact original Preface cover design idea – but all entreaties on that score have been ignored by BBC Books and others, even though there's a huge Blackadder audience out there who missed the book first time round, and would snap it up in 2019. I am constantly meeting people who claim to be the biggest Blackadder fan... who had no idea his True History had been told.

Now, I would never be so paranoid as to assume that the poor sales of these books was down to my vision for the book cover. I remain endlessly proud of all three books, just as I am vehemently proud of Soupy Twists – all three were well-reviewed (where they were reviewed, that is), and I know they are good stuff, comedy history you can stick a spoon into and guzzle. It's just that each one all-but evaporated when let loose in the insane world of book marketing, and many many people who would love them still don't know they exist.

So here's a thought, what if this book, Soupy Twists, having had nugatory input from me in its outward presentation, finally bucked the trend and sold admirably? Stranger things have happened, and indeed do happen every day, not least in the seamier suburbs of Crawley.

So I've chosen to adore and cheer on this strangely grey and yellow cover, and I dearly hope you do too. If this book does well enough, maybe I will keep my oar out of book cover discussions forever more, because I've learned the very very hard way indeed that it's better to have a book that actually sells than a cover over which I have had authorial control. Or rather, that sounds nice anyway, but it's never happened to me as yet. Fourth time lucky...?

If you have been, that's your look-out.

And as I love you, I'll leave you with this entirely gross demolition of one of Hugh's best songs in this Trump-stained world. KICKIN' ASS:

So sad to hear of your earlier books not selling up to predictions! If it's any solace, the minute you mentioned your Blackadder book, I went out and bought it. I'm really excited to read it---I flipped through it and it looks entrancing! I'm glad you chose the cover you did. Draws the eye and looks friendly and funny.

PS: You're awesome. And inspiring. Thank you.

Jem, I eagerly await “Soupy Twists”. After reading this I want a copy of your Blackadder history. How can I purchase a copy?