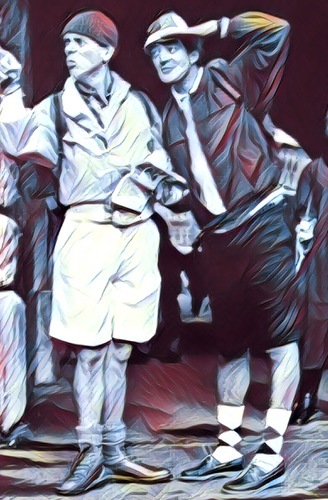 If you were to take a sky-diving course – and why wouldn't you? Life is dull enough – you would obviously be very keen to get out to feel the thermal currents filling your body with endorphins. But if your sky-diving instructor took a look at your parachute, and told the pilot they'd have to land and find a safer one, would you say "Screw you, Nazi!" and leap out into the wide blue yonder? Only if you wanted to do an impersonation of mince.

And so I have no option but to relay to you the deeply disappointing news that Unbound Publications has requested more time to ready Soupy Twists – The Official Fry & Laurie Story for release. In fact, all you darling pledgers should hopefully already have received this update from the very equine mush*:

Every now and then a book is delivered that exceeds your expectations. I’m pleased to say, Soupy Twists, the official story of Fry & Laurie, is just such a book. Jem Roberts has exceeded his brief and delivered a manuscript that bursts with energy and bristles with remarkable research. It will in time, I feel confident, be considered a one of the very best comedy histories ever published.

However, to do it and its subjects justice is going to take time. It’s a big editorial job and not one we want to rush. So the end of the year deadline we’d hoped to hit has receded to early summer next year.

I know this will be a disappointment for many of you – for us too – but the final book will be more than worth it.

Expect Jem to tantalise you with extracts and updates over the coming months. And there’s now plenty of time to encourage your friends to pledge and get their names in the back of a stone cold comedy classic.

Thanks for your support and your patience,

As you know, I delivered the finished manuscript back in May, and we were on for a summer of sourcing images, finalising design and so on, all in time to hit the 30th anniversary of the first broadcast of the A Bit Of Fry & Laurie pilot this Boxing Day. The bookish folk at Unbound told me they were all so very happy with the way in which I have told F&L's story, they don't want to risk the book disappearing in the pre-Xmas crush (which admittedly has happened with most of my previous releases, all that loving hard work, evaporating on release to the public – even writing Douglas Adams' official biography failed to gain the kind of notice you'd expect), and so although I argued bitterly that all of you who have supported and pledged for the project were promised the book this year (and I hope I have still managed to get pledgers an earlier release), it now seems that 2018 will be the year of Soupy Twists, not 2017. To be fair, ABOF&L the series really began in 1988, so on the 30th anniversary front, it does still work either way.

But you must believe me, this delay is an absolute dagger in my giblets, having promised the book to you in time for Yule on more than one occasion. And if you'll forgive my indulgence, on a personal level the delay is utterly disastrous, as the state of the magazine industry means crucial freelance income has dried up almost entirely, and I will be down to £0 before the end of the year, with no timely book release to come to my aid. Though none of my books have been written with a financial motivation, the planned timing of the Soupy Twists release was going to just about save my streaky, so this has knocked me for a lot more than six.

In fact, straits are so dire, I have done something I never thought imaginable, and started a Patreon, patreon.com/jemroberts, should anyone out there sympathise, and be lucky enough to have the breadline somewhere beneath them.

I also have more works of comedy history I'm burning to create, as well as the crucial campaign that is TALES OF BRITAIN, which is by far the most important project I have ever attempted, so all help is sincerely appreciated. In fact, if you have any desire to help support Soupy Twists, and myself, pledging for this unique story collection just here would be perhaps the kindest thing you have ever done! Stephen is already aware of the book, and I hope we have his support as the campaign continues – maybe I'll get the gumption to alert Hugh too, both are patriotic types, I hope. There's literally NO single collection of UK folk and fairytales in existence, so do join the movement for a 21st century retelling.

But in the meantime, this Soupy Twists project will just take a little longer, and I will do all I can to keep you informed and entertained, with Stephen & Hugh's help (both have reaffirmed their proud support of the book, despite the delay), until you really do hold their official story in your beautifully manicured hands. In a way, this is good for Fry & Laurie fans, as it will require me to share even more material than I ever envisaged (always with their approval), and I will not neglect updating this blog, making it a continuing celebration of everything Fry & Laurie did together. For instance, there's this wonderful 1982 photo from the Lincoln, Rutland & Stamford Mercury I took a snap of when combing through the Footlights collection in Cambridge: 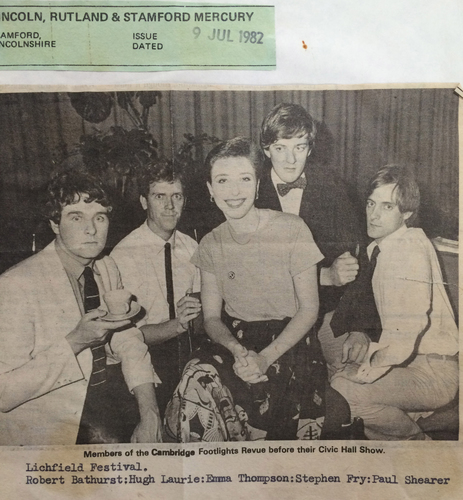 What an image. Behold Stephen's gaze of sheer withering hatred for the beaming star of the show, see Hugh's face of literal disgruntlement, Paul's blank stare and Robert's... blank stare, also. I would so love to have this cutting in the book, but I'm not sure if iPhone pics of old newsprint are considered publishable by Unbound, so this may be my only chance of sharing it with you. I just hope bits and pieces like this will be some recompense for your kind support, and above all, patience. Please remember that nobody is more crestfallen by this delay than I am, and when the book is ready early next year, it should be even better than if it had been 'rushed through' for a 2017 release.

I've enjoyed being fabulous with you, and I aim to continue to be so. In conclusion, then: VILN.

*I am not saying the Unbound CPO's mouth bears any resemblance to a horse's. No horse could grow a beard that impressive.