Biggest news first, the latter hero has admitted his participation in this project to the world: 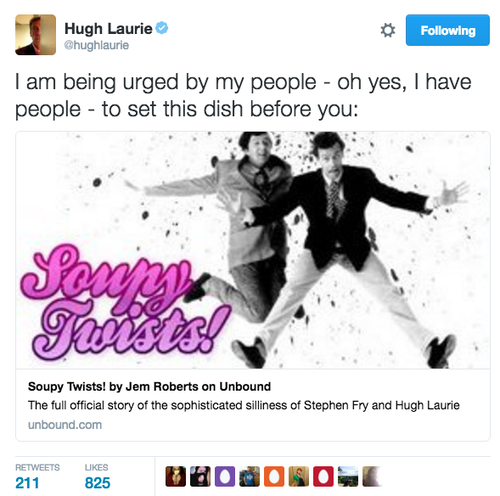 ... Five months after promising to do what he could to me in person – at the time, we didn't know this would be an Unbound book, so nobody thought so much early publicity would be necessary, so it is extraordinarily kind of him, and allowed us to creep up to a two-thirds total! And we're confident that 100% will be reached before the autumn, but for reasons we cannot yet divulge... Until then, do you have 200-odd Fry & Laurie-loving friends? You surely must. Give them a ring.

Research for Soupy Twists is something of a challenge. Go to YouTube, and type in "stephen fry interview", and you may get an inkling of the similarity between what I'm doing, and capturing the entire firmament in a small woolly hat. Not that wallowing in Fry & Laurie's past is anything but sheer unvarnished pleasure, of course, but it's not for the faint-headed. 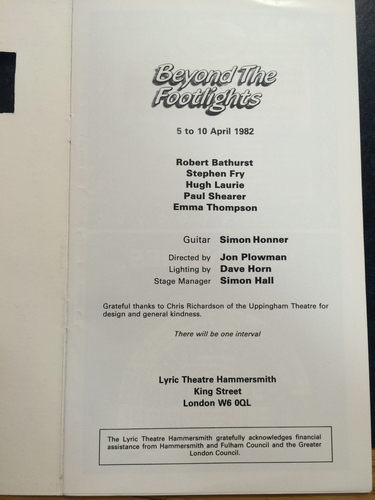 Lest you think this unpaid work is all transcribing videos from a pillow throne, the greatest chunk of research for this book took place last week, when I arose at 4am to spend a value-packed day at F&L's magical alma mater, Cambridge – a double slog of a journey from Bath, and I wasn't back home until 1am the following day, but I made sure to get maximum use of my time in the city. Living somewhere as breathtakingly beautiful as Bath, it takes a lot to impress me, but Cambridge's gargoyle-packed Medieval majesty makes it one of the very very few places that can manage it.

The last time I was here, researching for my Douglas Adams biography The Frood, I was given splendid dons' quarters at St. John's College, with complimentary decanters of port, but this time I was itinerant, and many miles were walked. As my time at the University Library to go through the relevant years of the Footlights archive was not until the afternoon, one thing I did feel the need to do when there was retrace our heroes' steps.

And so I wandered out into the leafy suburbs, where I found Hugh's home, Selwyn College – just over the road, practically, from Newnham College, where Emma Thompson was stationed... 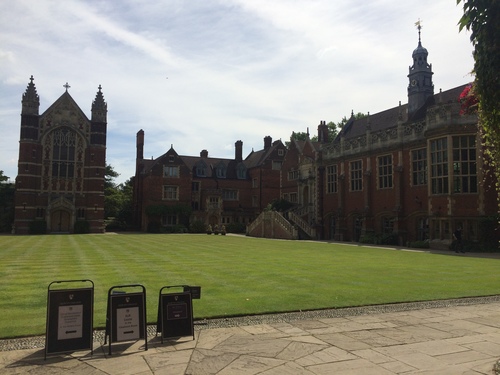 From there, walking into town brought me to Queens' College, Stephen's home for much of the duration of his education. It was surprisingly tough to pinpoint for me, due to so much of the building – or rather, estate – being relatively new, and, as I've never been to Cambridge in term time, the area was absolutely swamped in tourists ("He is a tourist, you are a holidaymaker, but I am a traveller...!"). 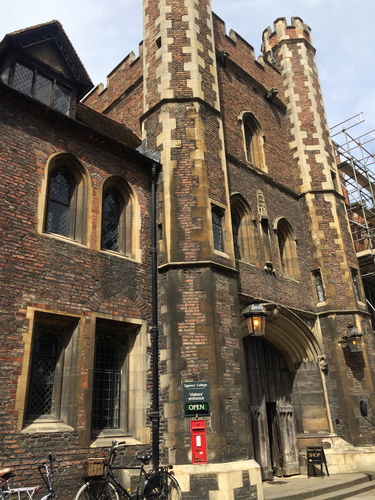 Anyway, from Queens', you're almost in the centre of town, and the Footlights cellar clubroom beneath the Union, just around the corner from the ADC Theatre, where it all happened. I even had a jolly good go at identifying which shop used to be the Whimburger joint where the Cellar Tapes gang habitually hung out – the poor staff in the shops had no idea, but it was presumably one of these... A blue plaque must surely be in the post. 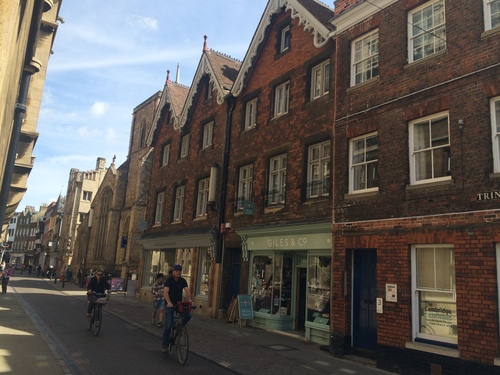 Even (do excuse me for saying, Stephen and Hugh) 35+ years on, it was all too easy and too pleasurable to picture Hugh heading off to for a rehearsal, picking up his pals as he travelled, and stopping off for a burger or three on the way.

... Returning to the subject of the ADC, quite pleasingly, Spamalot, the creation of another Footlights alumnus, was running there at the time, and I was very lucky to be shown around by the theatre's kind staff, so I could drink in the atmosphere of the arena where Stephen and Hugh really began their careers. 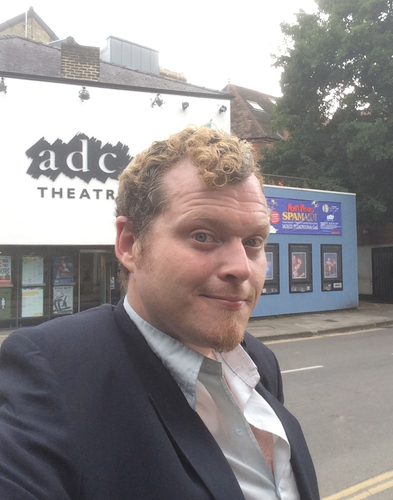 The author exercises his continued right to ruin every photograph by turning them into selfies. 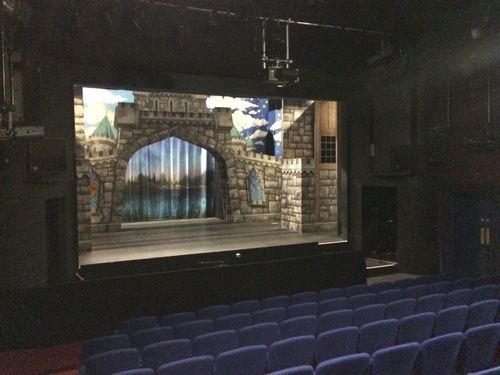 But atmos imbibement only gets you so far, and the main thrust of the costly and exhausting expedition was to see what remained in Dr Harry Porter's archaic Footlights collection at the library. At the risk of in any way raising an eyebrow at our heroes, there's no denying that there was considerably less paperwork remaining from Hugh's presidency than most eras – sadly, there was to be no excited script discoveries, just a few typed running orders for smokers, a host of cuttings, programmes, and – the biggest treat – the original posters for The Cellar Tapes, and Hugh smoker Memoirs of a Fox. Perhaps I should be grateful that this is all I found, as it was tough enough to squeeze every document in before chucking out time, and a pint or two at the Baron of Beef before making the long journey home. 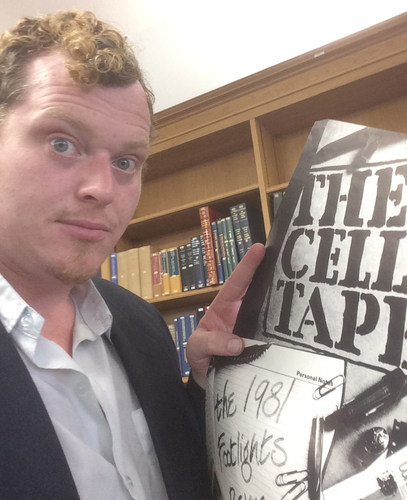 See above. Or rather, don't.

With this journey taken, it's fast becoming time to declare the research period of Soupy Twists production at an end, and it is time to settle down and start chewing pencils hard as the actual act of composition begins. This is slightly less blogworthy stuff, but of course what does remain is the need to interview a whole host of beloved famous names who feature in this rollickingly good story, so I will keep you all updated on how that process is coming along, as Soupy Twists marches towards glorious existence.

Finally, I will leave you with this extraordinary discovery, from Tracey Ullman's 1997 HBO sketch series. To have found this literally on the day that David Cameron finally resigned is the most bitter-bitter experience – I swear to Satan that had this been uploaded a year or two ago, it would have gone viral, mocking as it does the kind of Bullingdon Club pig-loving behaviour of our previous Prime Minister in an eerily prescient way... PORKY BOY!