It's coming up to nine or ten years – nigh very much on – since I first began writing books on comedy history, and yet, disgusting though the fact is, I've never been here before. It's taken the Fry & Laurie story to bring me to famed haunt of cultural historians the world over – the BFI. The BBC Written Archives have long been a second home, and I've seen many a mind-blowing rarity thanks to the kindness of individuals, but not yet had cause to spend the small fortune required to feel like a proper archivist and mosey into the BFI building, ready to see something it would otherwise be impossible to get your eyes on. 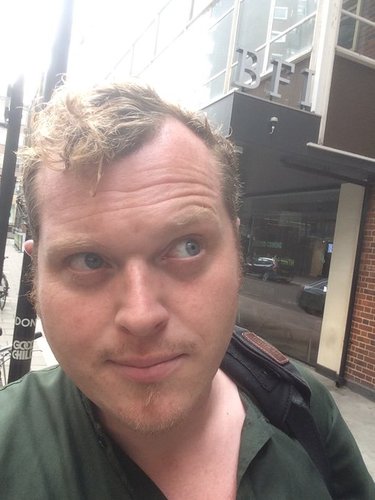 We've all seen those few seconds of Hugh turning up on almost-forgotten* late 70s BBC 2 show Friday Night, Saturday Morning – appearing from behind a potted plant in redcoat army regalia – and that just wasn't enough for my purposes, frankly. I needed to see those shows (because there were two Footlights specials, in November 1979 and 1980) in full, the clips in context, and maybe find out if they were at all... well, funny.

Thanks to the helpful Kathleen and Steve, my visit to the BFI Archives was a cosy enough affair, and I was given a surprising level of freedom – and I only hope that what I'm doing now isn't against the rules, and taking unfair advantage of that trust. I can always remove everything from the internet if I've gone too far over the line legally, and it's not as if I've actually pirated the two tapes I saw and put them up online in their entirety. What I have done is made audio recordings, and in a few key areas, short iPhone videos for my own use – and the odd quick snap of the TV screen as I viewed the episodes.* 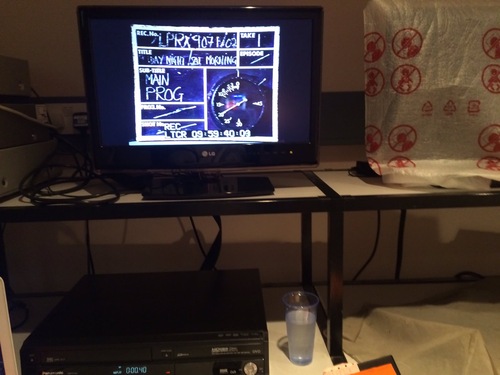 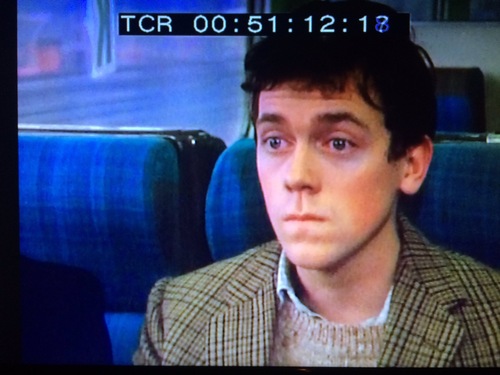 Innocent young Hugh in a most unfortunate Jimmy Savile skit, featuring Rory McGrath as the criminal.

As this photo devastatingly proves, the trite but overwhelming chief impression is just how insanely baby-ish Hugh Laurie is in his TV debut (the first episode, showcasing the 1979 Footlights show Nightap, was recorded several months before Hugh rowed against Oxford in the 1980 Boat Race). And this is why I feel it was worth the £100-odd the whole BFI experience cost me – Hugh was only TWENTY YEARS OLD (and about five months) when he first appeared nationally on our TV screens, on BBC 2, performing comedy sketches. That's a ludicrously tenderfooted age for any comedian to gain a national audience, and key to the context of Hugh's performance in The Cellar Tapes broadcast in 1981 – he was practically an old hand by then. There was also a Radio 4 broadcast of Nightcap that summer, so it was all go for the undergraduate who was only messing around with his theatrical friends while he rebuilt his strength for the Boat Race.

Are these two hours funny? Let's dispense with the usual truisms about humour being subjective to say: 'barely'.

Even special guest Peter Cook wasn't quite on the ball in this late-night slot, and although I sniggered a few times at random silly moments, viewing the programmes was more a case of absolute fascination than hilarity. The Friday Night, Saturday Morning strand was designed to be different every week, with no set presenter or format, and these two Footlights shows are pretty much The Frost Report, updated. Martin Bergman is the presenter, and despite his being now known primarily as Mr Rita Rudner, it's astonishing how clearly he was being lined up as the new Frost here, it's quite uncanny. He may not have become that at all, but he plays a crucial part in the Soupy Twists story, and it's interesting to see him in action here.

By 1980 Bergman was performing with his Footlights contemporaries Jimmy Mulville and Rory McGrath on the Radio 4 series Injury Time (also featuring Emma and Robert, and on one occasion, Stephen Fry), and these programmes do have a slight feel of being an attempt at a TV version. There are skits on how awful The Sun is (with plenty of shots of Emma in a bikini which have it both ways, being satirical while appealing to Sun readers anyway), a bizarre corpse-filled two-hander between Hugh and future Cold Feet star Robert Bathurst as two cowboy old-timers, and an extended riff on Billy Bunter at a comprehensive school which only has to be seen to be absolutely horrified by – and yes, that is mainly down to Rory McGrath's appearance as a dreadlocked rasta. Although Hugh's terrifying punk isn't much more convincing: 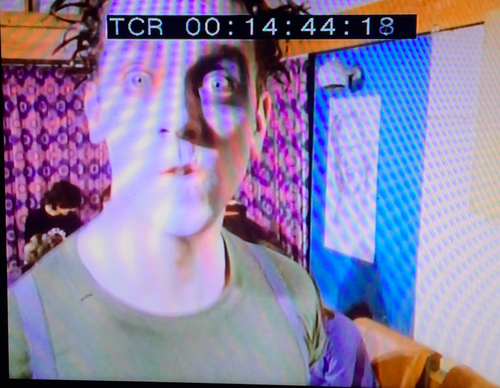 Emma sings a number of songs, but there's no singing from Hugh this time. He does, however, crop up with his by then ex-girlfriend in a Mrs & Mrs spoof, and makes a very first appearance in American guise, playing a kind of pretentious TED Talk figure who can't help filling his speech with too much multisyllabic jargon: 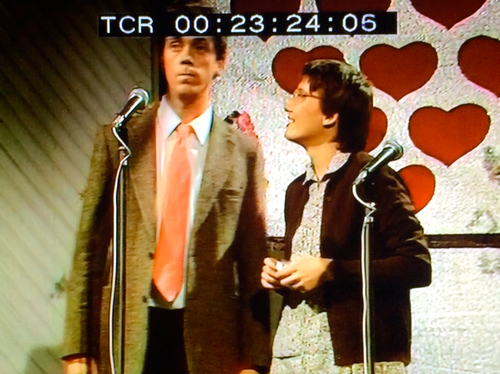 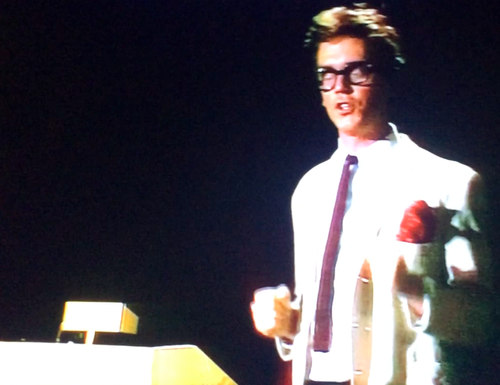 Anyway, the greatest risk I'll take with the material I amassed is the video below, as I feel strongly that any and all Peter Cook material which can be found should be shared ASAP with all his devoted fans, like myself. Given the endless connections between Peter and his good friends Stephen and Hugh, it's not too out of place to include it here – I only wish it was more of a forgotten jewel, but the truth is Cookie tells a fair few stories which will be familiar to fans from other televised chats over the years, and they have been more highly polished in the other tellings. But here, for your entertainment, at least until I receive word that I have broken endless rules and have to remove everything from the internet, is a very rare Peter Cook interview for you all.

If I've got away with this, I'll consider uploading a few other snippets in the coming weeks and months. In return, do keep spreading the word and helping Soupy Twists to reach that all-important 100%!

*Forgotten, that is, except for the memory of Harold Wilson being awful at hosting, and especially for the endlessly repeated – even restaged – Cleese & Palin vs Muggeridge & Stockwood Life of Brian debate which I don't think I could possibly see again in any form without smashing someone.

*PLEASE try not to download these images, or any material, and share them on social media. No matter how much you love Hugh. These images are really intended for use only in direct connection to the Soupy Twists book, and I might get in awful trouble if they travel too far... Thank you!

Thank you for these regular updates, Jem!

I'm looking forward to any background you can colour in on "Saturday Night Fry"*.

How does the Unbound process work - do you write the whole book and then publish it when you raise 100%, or just make sure you keep pace with the pledge percentage?

*The sketch-based confection; not sure there would be much background on the making of the chat/magazine programme...

I do have some nice bits edited out of SNF which I hope to find room for – exquisite scripts at the BBC Archives!

I've only written the first page or three of the book – I'm a full time author so can't afford to write for free! No Unbound book is guaranteed to exist until it reaches 100% so it's not wise to write too much until then, even though this one is very very very unlikely not to hit 100%. It's to be released at the end of next year to mark the 30th anniversary of A Bit of Fry & Laurie.