I have mixed memories of performing this sketch for a Comic Relief show in 1999. With full approval from their agent Lorraine Hamilton, of course. I played the male silent client, and am no Robert Daws. Plus, it was decided that the sketch would be enlivened on stage by having the clients act out their lawyers' descriptions, which totally negated the humour of the sketch, and required a lot of theatrical dry-humping. It was not my idea, okay?

In further news, a week or two after the Hugh Laurie on Tracey Ullman video, to redress the balance, I just uploaded a rare Fry sketch from 'Rita Rudner' – the American star's 1990 BBC 2 show: https://www.youtube.com/watch?v=VGwGoSwpBYg

Some exciting interviews are lined up, and both colleagues have just received the first batch of email questions (there will also be in-person interviews, of course). The manuscript itself is flowing out quite pleasingly, but I'm already terrified of wordcounts – just writing in a frothy, non-obsessive manner, I've reached 5,000 words without quite introducing Stephen into the story just yet... Anyone for an extension?

I'll leave you for now with this remarkably prescient article from the Mirror, in 1982. You can't say that paper is composed of nothing but mad people sending in letters about miserable bus conductors and good ways to keep your money safe, in a special pocket sewn inside your coat... 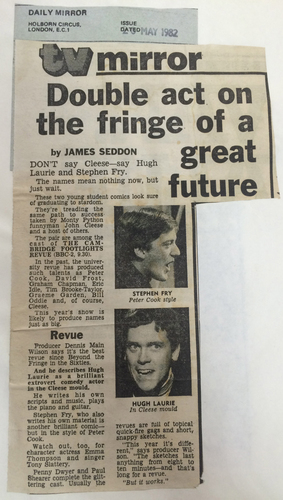