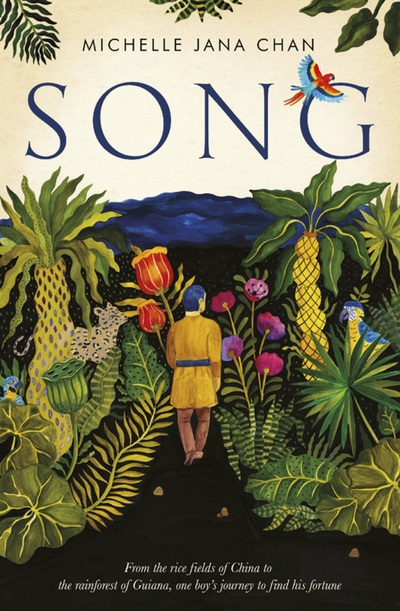 Non fiction
You made Song a reality. It's available in all good book stores now.
$8
59 pledges

An hour’s travel advice by phone/Skype for anyone planning a trip to Guyana (or anywhere else in the world that Michelle knows) with top travel tips on where to stay, where to go, what to avoid and recommended on-the-ground guides. Plus signed 1st edition hardback, ebook edition and your name in the back of the book
Shipping applies
$375  + shipping
3 pledges

A salon discussion/dinner appearance from Michelle with readings from and conversations about the book. Any destination (travel expenses extra) Plus signed 1st edition hardback, ebook edition and your name in the back of the book
Shipping applies
$825  + shipping
7 pledges

Ten signed 1st edition hardback books and your name (personal/company) printed in the front of the book as a special Patron. Plus the ebook edition.
Shipping applies.

Set in the post-slavery years of the 19th-century, this is a story about a young boy, Song who travels from China to British Guiana to seek his fortune. He begins his new life as an indentured labourer on a sugar plantation, eventually finding success as a gold prospector. Yet not all his dreams are realised; he never succeeds in sharing his wealth with his family back in China, nor is he accepted into the ruling colonial class. He is between places, between peoples, and increasingly aware that his circumstances of birth carry more weight than his accomplishments or good deeds. He will forever live as an outsider.

In many ways, Song’s story is a contemporary one. He travels half-way around the world searching for a better life. We live today during the greatest movement of people made up of individuals such as Song. For many of these economic migrants, as it was for Song, they never find a place they can truly call home.

Through my father’s line I am descended from indentured Chinese immigrants who journeyed to British Guiana in the mid-1800s driven by the desire to improve their lot. My father grew up there but left in the 1960s — searching for a better life in England. I began my career writing for Newsweek magazine in New York before moving in the 1990s to China — where there seemed to be the most opportunities for a young journalist. My migration, inadvertently, brought my family story full circle.