By H Boyd & B Roddam 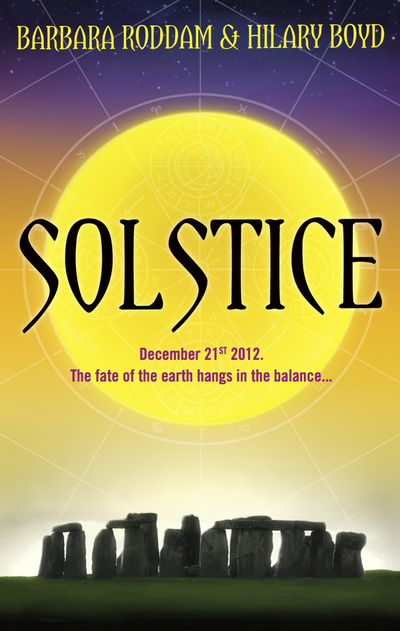 Fiction | Sci-fi & Fantasy
You made Solstice a reality. It's available in all good book stores now.
$4
32 pledges

The idea The winter solstice 2012 has long been accepted as a hugely significant date. We wanted to investigate why. Our research threw up three theories that particularly intrigued us. First, the Mayan calendar comes to an end – some people think this heralds the end of the world. Second, the sun will be aligned with the centre of the Milky Way for the first time in 26,000 years. And third, the energy streaming into the earth at that moment will be focused specifically on Stonehenge.

The theory Looking deeper, we found out that Stonehenge was built to honour the sun (male) and moon (female) equally, reflecting a lost period of history when men and women held equal status. We were hooked! But New Age wisdom claims that this equality has vanished. Now men dominate the world, women are oppressed, technology (male energy) is supreme, and the planet is increasingly violent, prone to extreme weather and failing. Obviously, this can’t be good for either men or women.

The challenge We decided to write a story where that imbalance of male/female energy is put right. Our seven main characters – three women and four men - are originally from Atlantis. They have powerful, mystical abilities – which most of them are unaware of at the start of the book - and an identical birthmark which identifies them on their wrist.

The story will weave together their past and present lives, gradually making them aware of their extraordinary destiny. Will they be ready to complete the vital ceremony at Stonehenge to rebalance the planet? The sun’s unique alignment at 11.12am on 21st December 2012 provides the only moment for thousands of years when it can take place successfully. But the seven are up against an old Atlantis enemy. And he will do everything in his power to stop them.

The clock is ticking… we have 89 days and 21 hours to get the project funded before the Solstice!

1st edition hardback and the ebook edition.
View all 3 rewards