A collection of one hundred (mostly) useful robot friends

60% funded and some general updates!

Hello, everyone! This is Thomas, the strange little mind behind small robots.

As of just this minute, this campaign has hit 60% funded! Thank you to everyone who's pledged so far - to get to this point after just 10 days is honestly incredible. 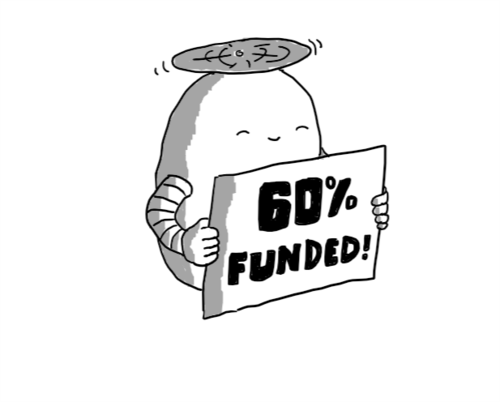 Traditionally, this is the point where I'd say that I never expected this kind of success and I'm shocked and delighted to have come so far in such a short time but, to be honest, I had a pretty good feeling about this from the beginning! Since I started the Twitter account @smolrobots, it's been clear that I'd managed to tap into something special and this book will - hopefully - be the culmination of all that.

So, 60% funded is obviously amazing, but now comes the hardest part because this is the point at which pledges start to plateau and we reach a saturation point of Twitter followers willing to contribute. So, to get things moving again and keep up the momentum, there will be some new pledge levels hopefully coming next week:

Knitted Tinybots! This will again be hand-made by my wife, Emma, and will be available as keychains, magnets and pins.
2-D fridge magnets featuring a selection of robots.
A plush Bigbot! This is going to be a bit of an experiment (and obviously won’t be actual size…) but I’m told it will be easier to make than the crochet Notokaybot, so it will come it at a level lower than that.

A final thing that’s been bugging me slightly is that I want to make sure I give something back with this book. I mean, I think Small Robots are a good thing for the world in general, but it would be nice to have some direct action involved. The way that Unbound works is that the initial target covers the cost of actually producing the book and of fulfilling the pledge rewards so, until the finding hits 100%, the author doesn’t get anything. This is fair enough – Unbound can only take the chances they do because the initial investment is crowdfunded. Once the target is surpassed, any profits from further pledges are split 50/50 between Unbound and the author (as will future profits if the book is made commercially available). So, all this is a preamble to saying that it’s my intention to donate half of any money I get from funding to charity. I’ve donated to Mind on behalf of Small Robots in the past and some profits from my other publishing go to a local women’s shelter, but I’m willing to entertain other suggestions! As I say, this won’t kick in until the target is met, so it’s really an incentive to push past that in the future. There will also be other stuff if and when we get to that stage – I’m planning more illustrations, animations and other cute little bonus content.

Anyway, this is all just to say thanks for the support so far. The fact that this project has got to this point already is still really strange for me. At the moment it feels a bit like I have two jobs, because drumming up crowdfunding takes a big investment of time and energy. I’d be lying if I said I hadn’t been struggling a bit over the last week as I try to balance regular life with the ups-and-downs of a fluctuating rate of funding. It’s stressful, and deeply weird being under a spotlight as my real self so, frankly, the sooner this can all be done with, the better! It’s tough, as well, realising that I’ve put so much pressure on this campaign – this really is what @smolrobots was all about from the beginning, so if it fails…yeah…it’s going to be disappointing. Not that I’m resorting to emotional blackmail or anything because I remain confident that we WILL get there, but it’s a lot for someone like me to handle, that’s all. Bear with me.

So, in conclusion: thanks, but let’s keep going!

Bloody well done, H-Hs! You’re clearly on to a winner.

Shared to my Facebook circle. Keep the magic going!

Get the hardback, plus the ebook.
Buy now
£5
56 pledges

Get the ebook edition
Buy now