Find out why the era of big government, big business & big culture is over 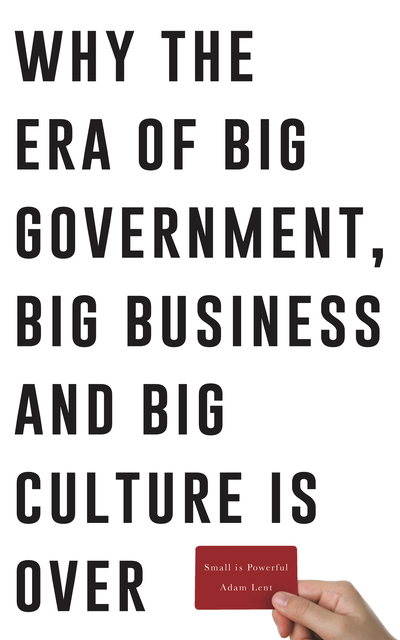 Business
You made Small Is Powerful a reality. It's available in all good book stores now.
$8
103 pledges

Our thanks and your name in the back of the book

Two invites to the launch party in London, a signed 1st edition hardback and the ebook edition

Lunch with Adam before attending a lecture at a central London venue, plus everything at Launch Party level.

A dedicated page at the front of the book thanking you for your contribution, plus everything at lunch level.

How can we create a wealthier, fairer and more stable world? Politicians tell us that we must rely either on big business or big government or, more often than not, both. This is a terrible failure of imagination that ends up keeping the very people and organisations in charge that delivered the most serious economic crisis in eighty years.

Small is Powerful will reveal how our faith in big business, big government and big culture was manufactured in the 1900s by a group of powerful business leaders, politicians and thinkers and how it had a forceful grip on our world throughout the twentieth century.

Even if our political leaders are still in thrall to the 'big consensus' of the last century, a small revolution is already underway. Millions are choosing to set up their own small business rather than work for a giant corporation. Political and social change is increasingly delivered by many small initiatives and campaigns rather than big parties. And, more than ever, people make their own decisions about how to live their lives rather than accepting the rulings of big religious and civil organisations.

Small is Powerful argues that the small revolution must be embraced. A world where power and resources are shared out much more widely will deliver the fairer, stabler, wealthier world we want.

But it is a revolution under threat. Business, politicians and those who think they know best how we should live are fighting back. Small is Powerful is an impassioned plea for 'smallists' everywhere to stand up and be counted.

You can find a full chapter outline here.

[Thanks to Etsy and Impact Hub for additional footage.]