Paint My Name In Black And Gold

Paint My Name In Black And Gold is the story of the first five years of The Sisters of Mercy.

Biography | Music
You made Paint My Name In Black And Gold a reality. It's available in all good book stores now.
$25
52 pledges

Beyond The Things You Know

A copy of the first edition hardback
Buy now

Names Are Just For Souvenirs

A signed copy of the first edition hardback, plus the ebook.
$45
12 pledges

Maybe It's A Way Too Long

A digital bundle of the ebook, access to a special playlist curated by the author and a PDF of White Rose Babylon (for the connoisseur of Leeds music of this era)
$55  + shipping
33 pledges

Tune In, Turn On…

Access to a special playlist curated by the author, a signed copy of the first edition hardback, plus the ebook.
$70  + shipping
29 pledges

Two copies of the first edition hardback, plus two ebooks and two names in the back of the book.
$75  + shipping
55 pledges

For the connoisseur of Leeds music of this era, this PDF is “Paint My Name In Black and Gold: Redux”. Plenty would be left on the cutting room floor otherwise. Think of this as the Extended Footnotes or the Director’s Cut. Maybe a sampler for another book? Plus access to a special playlist curated by the author and everything at the signed hardback level
$115  + shipping
57 pledges

Your name printed in the front of the book as a superfan, the White Rose Babylon PDF, access to a special playlist curated by the author and a signed copy of the first edition hardback and the ebook.

In that time The Sisters rose from being local heroes in Leeds, to one of the premier alternative bands in the UK and Europe, before blowing apart on the verge of major rock stardom. Their path was strewn with brilliant singles, exceptional EPs, extraordinary album tracks and legendary live shows. At their peak, The Sisters were all bang and no whimper.

Throughout their ascent The Sisters remained steadfastly a Leeds band. Paint My Name In Black And Gold is therefore a portrait of a band, but also a portrait of a city. Leeds was, in the words of Craig Adams, “a shithole, but it was ours.” Amid the violence and decay, it had one of the most extraordinarily vibrant post-punk scenes in Britain. Out of that swamp crawled The Sisters of Mercy. “And what a fine, fetid swamp it was” Andrew Eldritch once noted.

They began in 1980, maybe even earlier in some nameless protozoic form, and meandered through two years of intermittent gigging, iffy recordings and sundry line-up changes without much attention being paid to them before finding their two classic line-ups: Eldritch on vocals, Adams on bass, Gary Marx and Ben Gunn - and later Wayne Hussey - on guitars, and a drum machine called Doktor Avalanche.

By force of will and their own peculiar talents – and with the support of friends and the kindness of strangers – these young men achieved greatness. Hussey and Adams – The Evil Children, as they termed themselves – were hard living road dogs with fascinating musical back-stories. Neither Gunn nor Marx were natural rock’n’roll animals, but the latter performed with such abandon – often in such lurid shirts – that it was hard to believe he also wrote The Sisters’ most delicate and beautiful music. Eldritch was the most peculiar and compelling of them all, a singular and mesmerising amalgam of TS Eliot and David Bowie. In the five years covered in this book, Eldritch staked a powerful claim to be the greatest rock star of his generation.

In the late ‘80s and early ‘90s, Eldritch would go on to have chart hits and play stadia with new line-ups and with new kinds of fantastic Sisters music. None of this is in Paint My Name In Black And Gold. However, the book does contain an Epilogue that covers the toxic aftermath of the band’s split. A nascent “This Corrosion” and Werner Herzog have walk-on parts at this point. 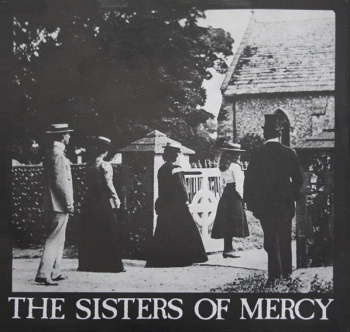 Paint My Name In Black and Gold is therefore the story of how The Sisters of Mercy – against the odds and all reasonable expectation - came to make transcendent and life-changing music. Yet it is also about the glorious stupidity of being in a Leeds rock band. There’s a lot of dry ice, blood, vomit, speed and sex in the toilets of The Leeds Warehouse. There are also tales involving a milk float, a VHS cassette of a Michael Caine film, a hibernating snake, a wardrobe in a tree, an amyl nitrate-soaked effects pedal and the inopportune consumption of Dutch hash cake.

Paint My Name In Black and Gold is the early history of the greatest British band of my lifetime.

Beyond The Things You Know