The sexuality of Lady Bertilak – empowered or manipulated?

The character of Lady Bertilak in Sir Gawain and the Green Knight is one of the most astonishing creations of the Middle English period. But what was the Gawain-poet’s intention in creating a woman of enormous sexual power and confident in her own needs? 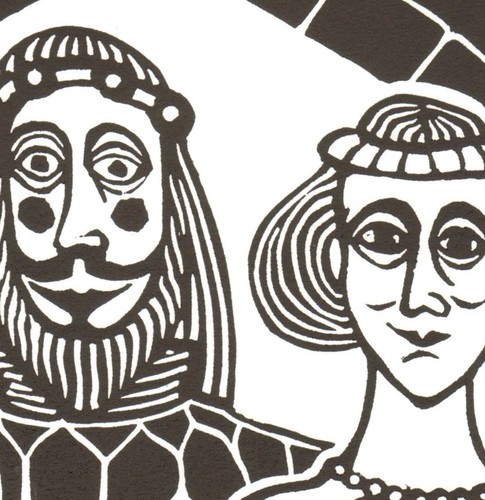 Lady Bertilak, or more simply “the Lady”, is characterised by the poet as someone who is eye-catchingly attractive, articulate and artful. She is a woman who knows how to flirt and knows what she wants, even employing tricks such as using notional personal disappointment and despair to ensare her prey. While at first glance she appears as every man’s desire, she evolves into what appears to be an archetype of empowered feminism; an unusual character in a patriarchal society. She is certainly not a damsel in distress but later in the poem she evolves once more, and in a most unexpected way...

When we first meet the Lady, the poet masterfully portrays her in the way of eyes meeting across a crowded room. We don’t see any other woman but her (lines 943-5):

She who was fairest in face, form and looks,

And highest of courtesy, colour and countenance,

And more bewitching than Guinevere, so Gawain thought

Immediately, the poet has placed the Lady on a pedestal higher than that of the purest of queens (it is noted that the poem is set at a time before Guinevere’s relationship with Lancelot). He also uses a Middle-English pun, using the word “wener” (beautiful, bewitching) and “Wenore” (Guinevere) to highlight the tension.

From this point, we know that this woman will play a central part in what befalls Gawain in Fitt 3 of the poem, a key element of which is the “Foreword” or pact between Lord Bertilak and Gawain. Here, Gawain is invited by the lord to reside at his castle for three days; on each of those days, the lord will go out hunting and give whatever he catches to Gawain as a gift.

All that Gawain needs to do is stay in the castle, and anything he wins there he must give to the lord as a gift. It is now that the poet is at his masterful best: he creates vibrant, active scenes of winter hunting for deer, boar and a fox. At the same time, he warms us in velvet rooms as the lady soft approaches Sir Gawain to give him his “gifts” of kisses (lines 178-187):

Thus the lord is in sport by the edge of a lime wood,

And Gawain the good man lies in his gay bed,

And lurks while the daylight gleamed on the walls,

Under bright-crafted coverlet and curtained about.

And, as from slumbering he slips, slightly he heard

A little din at his door as it opened deftly;

And he heaves up his head just out of the clothes,

A corner of the curtain he casts up a little,

And waits warily there as to what it might be.

It was the lady, loveliest to behold…

In three separate visits on three different days, the poet has the Lady visit Gawain in the highest intimacy of his own bedroom. This is not an open display of courtly affection in some gilded hall, it is fingers at play in deft, soft touching beyond the prying eye, where even windows are closed lest secrets slip.

Here the Lady works on Gawain and at one point, during her third visit, he nearly cracks. As the poet writes (lines 1770-75):

For that priceless princess pressed him so thick,

Nudged him so near to breaking that he felt needs must

Either latch to her love or so rudely refuse.

Yet he cared for his courtesy, lest he seemed a scoundrel,

And much more so for his plight, if he should commit sin

And betray that dear lord in whose tower he lodged.

With each visit, Gawain becomes ever more troubled. In the conflict between the Lady’s desires, Gawain’s duty as guest, and the curious need of the chivalric knight ever to remain courteous, our hero is trapped in a three way-world of duty, religion and training. A knight renowned for his “luf-talking” is now shackled by three sets of rules which he must work hard to obey.

The role of the Lady, it seems, is to crystallise this conflict, as becomes clear in Fitt 4 when it is revealed by the Green Knight (shown as none other than Lord Bertilak himself transformed by Morgan le Fay) that the Lady was working at the lord’s behest all the time.

Gawain’s response is to bemoan the “wiles of women” and their historic role (according to the poet) in bringing strong men down throughout history (lines 2414-6):

If through womanly wiles he is so won to sorrow,

For so was Adam on earth with one so beguiled,

And Solomon with his women, and Samson often...

This is curious. Now, although the lady was never empowered at all (being instead the articulate plaything of another man’s sexual imagination),  Gawain’s rules do not allow him to criticise Bertilak. Instead, a patriarchal normality returns to Hautdesert. The Lady has suddenly become powerless; when Gawain is invited back to the lord’s castle, she will somehow revert to a demure wife as if nothing had ever happened although, bizarrely, Morgan still remains powerful. Gawain, rightly, refuses to have any part in this and returns to Camelot a shamed man. 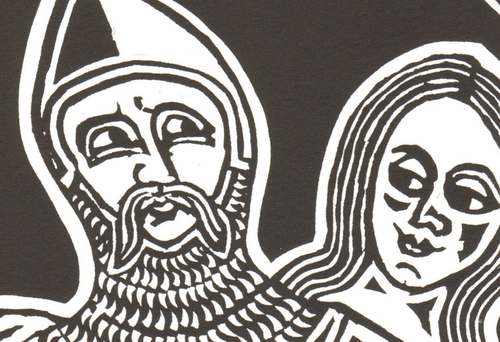 In many ways, the Lady’s role in Sir Gawain and the Green Knight is unresolved because we have seen her at her most seductive and yet are asked to imagine her as a forgiving, yet willing, participant in a dark plot. We are also left to reflect on the power of Morgan, an embittered old woman, somehow controlling what would appear to be an ideal marriage between Bertilak and his wife.

It is this conflict which has drawn many commentators to reflect on the poem as some form of didactic instruction for its noble readers and which lift it above so many Arthurian romances. In this light, the role of the Lady and the vanity of martial men made weak by effete obsession, may be seen as a commentary on contemporary events. It may address the decline of Edward III at the hands of his mistress Alice Perrers, reflect on the monarchy of Richard II, or question the legitimacy of his successor Henry IV.

Yet there is more. Lady Bertilak may well have been used as a warning to leaders who have let their eyes wander but she also tells us something else about contemporary mediaeval society: there were women about who were powerful, attractive, and knew exactly what they wanted.

Lady Bertilak may be a literary creation, but she was not imaginary.

If you enjoy reading Sir Gawain and the Green Knight and would like to read others in this series, my second book, a translation of the Alliterative Morte Arthure (King Arthur's Death), was published by Unbound in February 2021 which you can order through all good bookshops or from me. I am also now crowdfunding my next book with Unbound - a translation of the allliterative William and the Werewolf (William of Palerne), first commissioned by Humphrey de Bohun, Sixth Earl of Hereford, in c.1350. Again it will be richly illustrated with linocuts, and feature a detailed historical introduction, glossary and notes. Please do support it (and have your name printed as a patron in the back) - here