The Arthurian canon is rich with many characters, many of whom have become known to us all: King Arthur, Guinevere, Lancelot, Galahad and of course Gawain. Sir Gawain, the subject of Sir Gawain and the Green Knight, is himself a curious character who varies in personality depending on which of the stories one reads. He has certainly been a constant figure throughout the histories of Arthur. 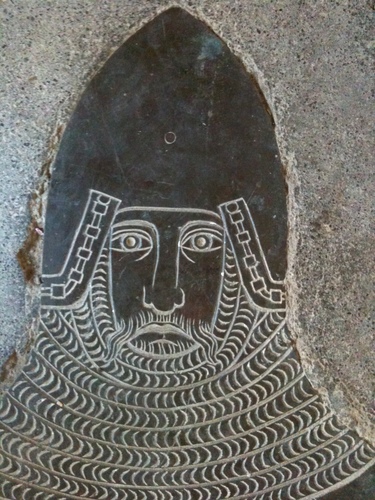 Sir Gawain is the cousin of King Arthur himself. He is a valiant knight, he is a defender of women and he is famed for his courtliness and, in our poem, for his “luf-talking”. These are all features of what, during the “Age of Chivalry”, made for a knight of high standing – an apogee of courtliness which some of the great chivalric Orders saw as defining their code.

Yet, despite his often heroic appearances (for example his almost supernatural powers in the Alliterative Morte Arthure of the 1340s), the Gawain we meet in Sir Gawain and the Green Knight is curious. Certainly, he carries a reputation for knightly prowess (as referred to with great admiration by Lord Bertilak). He is also known and revered for his luf-talking (both features which we might recognise from the romances of Chretien de Troyes such as Perceval) but he is also a strange combination of reticence and foolhardiness, confidence and insecurity.

The Gawain we meet is impetuous and may be young. At the time when the poet sets his particular story, we have not yet been introduced to the adulterous Guinevere we know of from other stories. Instead the queen is seen as the apogee of beauty – and feminine purity. This suggests that the court is therefore younger than we are told from others in the canon.

This too may explain Gawain’s hot-headedness not only in taking up the challenge from the Green Knight but also in confronting him aggressively at the end of the poem. Gawain’s shame at the end of the poem also defines a certain inexperience; an older character – unless permanently scarred by incompetence or wilfully lustful – would not have allowed himself to be outwitted by Lady Bertilak.

A religious element permeates the poem – but not to excess, and certainly not in a didactic manner. Gawain is devoted to God, as would be expected; it is also suggested that the image of Mary painted on the inside of his shield (in addition to references to her at critical parts of the poem) links him to the cult of Mary which was popular at the time.

He calls to Mary not only when desperate to find somewhere to pray at Christmas but also when seeking her protection against Lady Bertilak’s seductive advances. The haunting words “Our Ladi help” carved into a column at Anstey church in Hertfordshire are testimony to the deep devotion felt by people in this period – and the tremendous fear they had for events often out of their control (such as the Black Death). 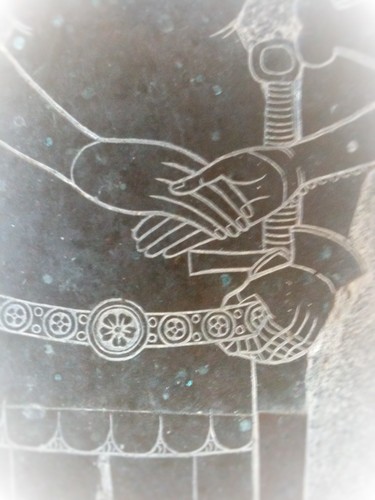 Detail from the brass of Sir John de la Pole

Gawain is also shown as pure – or perhaps is described as such for dramatic purpose. We are informed too that his purity – as shown by the points of the star on his shield – is crucial to his thinking. We know that he has no lady or wife of his own (we are told this by Gawain himself in Fitt 3) and so we are made to think of him almost as virginal himself, despite his skill in luf-talking. In places, he is almost like Chretien’s Perceval as an innocent abroad.

It is crucial to the performance of his character in the poem that he resists the temptation of Lady Bertilak. The deliberate contrasting of Lady Bertilak to Guinevere in Fitt 2 is a fabulous dramatic introduction which makes us aware of female sexuality as opposed to the purity of the women shown in chivalric ideals. We are later delivered of an angry rebuke against women which in many ways is completely out of character with the rest of the poem.

Yet still a warrior

And yet, despite all this, Gawain is renowned across the land of Logres for his skill at arms. We are told that he fights off wolves, wodwoses and countless other creatures and ogres in the crags as he crosses the land in search of the Green Chapel. He is impetuous when he picks up his sword to strike the Green Knight in the chapel.

We are also told at the beginning of Fitt 2, how he is meticulously prepared for his lonely journey in armour of the latest style (identified as armour of the late fourteenth century). In many ways, this ceremonial preparation tells us that the poet was writing about and for people he knew: people of rank in mediaeval Cheshire and Lancashire.

Servant to the author?

So who is the Gawain we meet in Sir Gawain and the Green Knight? The complexity of the character we meet must not be seen as part of an evolutionary development over the centuries of telling these stories. Different writers of Arthurian romances had different motives, often linked to those who sponsored them or indeed their own personal circumstances; to accept a chronology in the development of character would be inappropriate.

In the case of Sir Gawain and the Green Knight, we are faced with the difficulty of not knowing who the author was. This makes it difficult to understand for whom he was writing and therefore why Gawain’s attributes are what they are. Yet we do know, from the Gawain – or Pearl – Poet’s other works contained within the same manuscript (Cotton Nero A.x in the British Library), that he wrote on religious themes.

Although Sir Gawain is not a religious work in its own right, it does contain elements of thinking which might explain the Gawain Poet’s version of the Gawain character. In some ways we may see the poem as a treatise on the conflict between knighthood and religious devotion: a curious contrast indeed.

​Note: This new telling of Sir Gawain and the Green Knight is now two-thirds funded; we still have some way to go. If you would like to see this book published, please do pledge your support or forward this update to others you know who will be interested. There are some great pledge rewards too - now including four different framed, SIGNED, ORIGINAL linocut prints of illustrations featuried in the book produced by the author himself. Only one print available in each case - a unique reward for helping this book become reality!