Something a little different - a colourful knight emerges in linocut! 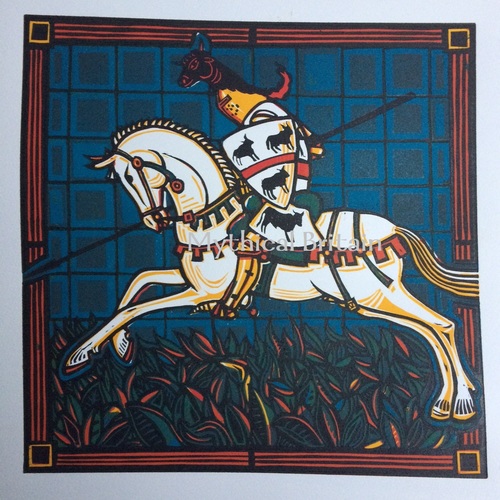 As readers will know, as well as translating Sir Gawain and the Green Knight I have also produced all the illustrations for the book using the linocut process. For this update, I thought I'd share with you some work I have been doing on a range of new prints featuring mediaeval knights from the time of the Gawain-poet. In this case, a Cheshire knight, Sir Hugh Calveley who may well have known the poet himself...

The monument to Sir Hugh Calveley can be found at Bunbury Church in the county of Chester although, as with many mediaeval monuments, much of the original polychromatic finish has long since disappeared. Luckily, we know the family crest of the Calveleys and this has been applied to my new print; in heraldic terms, argent (a field of silver or white), a fess gules (a red bar) between three calves sable (three black calves).

As with my prints illustrating Sir Gawain and the Green Knight, I base my work on the slightly amateurish illustrative style of mediaeval illuminators. I like the way their horses sometimes appear out of proportion and the way the knights sit in a strange way on their mounts, or stand on castle walls.

In this case, Sir Hugh is riding a horse through a carpet of different coloured leaves and plants as he charges gallantly towards some distant opponent. He wears armour typical of the fourteenth century although I have given him a ceremonial helm featuring his crest of a black calf and a decorative lambrequin or mantling. It is not thought that these helmets were worn on the battlefield itself but they often feature in illuminations of mediaeval jousts and ceremonial occasions.

The printed area of this new linocut is 12" x 12" and the work is hand printed on a 19th century cast iron Albion press (as are all my prints) on 300gsm Somerset Velvet paper. It is never easy creating a complex linocut print; particularly one involving four different colours (some of which I print as wet-on-wet to deliver extra colours in the final print palette). As a rule, I do not use the reduction method and instead create several printing plates for the different colours over a series of months. In this case, the cutting alone took over 100 hours.

I hope you think it has been worthwhile. For more information about the print - and my others featuring characters and scenes from Sir Gawain and the Green Knight, please visit my printmaking site at www.mythicalbritain.co.uk. And don't forget, there are still two original print pledge options available if you would like one of the original illustrations which accompany the book.

Thank you again for reading - and for supporting my new translation of Sir Gawain and the Green Knight.