After his journey through the land of Logres, Sir Gawain arrives at last at Hautdesert where he meets Lord Bertilak. Then, as shown here in part of my new translation, he is introduced to two women who, it emerges later, yield more power than might be supposed... 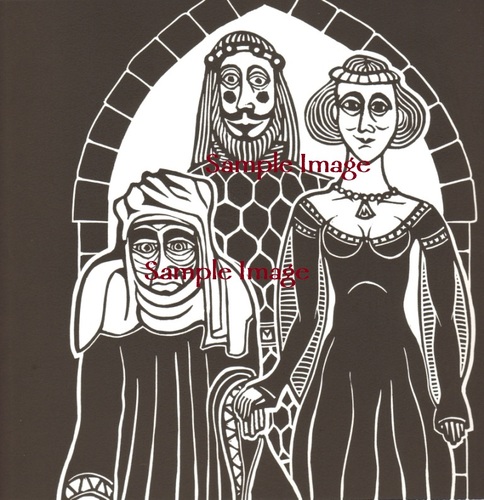 (Image: Lord Bertilak and the ladies. The original print of this illustration, framed and signed by me, is available to one lucky pledger!)

When the dinner was done and the dear ones full up,

It was nigh at the time when the night neared.

Choosing their path, chaplains went to the chapel,

Rang bells full richly, right as they should,

For the heavenly evensong of that high season.

The lord takes his leave for it, his lady also;

And they enter most courteously a comely closet.

Latching him by the sleeve the lord leads him to sit,

And acquaints with him courteously and calls him his name,

And said he was the most welcome one in the world;

And Gawain thanked him thoroughly and each hailed the other,

Then sat soberly together while that service lasted.

Then that lady likes to look on the knight

So she came from her closet with her charming ladies.

She who was fairest in face, form and looks,

And highest of courtesy, colour and countenance,

And more bewitching than Guinevere, so Gawain thought.

As that lady charmed through the chancel to cherish him

Another lady led her by the left hand,

Who was older than she, an ancient it seemed,

And so highly-honoured by that host all about.

But those ladies to look upon were not alike,

For if the younger was youthful, the other was yellowed;

Rich red on the one was arrayed everywhere,

While on the other rough wrinkled cheeks rolled;

The kerchiefs of the younger with many clean pearls

Displayed bare her breast and her bright throat,

That shone sheerer than snow that is shed on the hills;

That other wore a wimple geared over her neck,

Clinging round her black chin with chalk-white veils,

With tassels all trellised and with trifles about,

So nought could be seen but the black of her brows,

Her nose, her naked lips, and her two eyes,

Which were sour to see and so strangely bleared;

A model matriarch was she, we may call her

Her body was short and thick

Her buttocks bulged and broad

The prettier one to pick

Was the younger, by accord.

While today we may consider distateful the Gawain-poet's description of the Lady and the older woman (later to be revealed as the dangerous and manipulative Morgan le Fay), it becomes clear during the poem that the descriptions are crucially important in reinforcing the powers of both women as the plot develops.

While at this point in the poem we might see the observation of a man based on what pleases his eye, by the end of the poem we realise that both these women are far from what they seem. Indeed, their roles in the poem may well reflect contemporary events in England at this time; events which I shall discuss in the book too.

I hope you enjoyed this tiny section from my forthcoming translation of Sir Gawain and the Green Knight. To pledge for your copy or to increase your pledge reward level, please see the different pledge options on the right of this page (or below if using a mobile phone). Whichever pledge option you choose, you will receive a beautiful collector's first edition of this magnificent work - illustrated throughout with my own linocut images (including the one shown above). Not forgetting that your name too will be featured in the back as a permanent reminder that you have helped this book become real.

Thank you for supporting Sir Gawain and the Green Knight - the manuscript is now with Unbound. I’ll let you know when the book will be published!