This week I learned the great news that my illustrated translation of Sir Gawain and the Green Knight will be published in July 2018. I thought I’d reveal a little bit about what you’ll see in the book when it’s published… 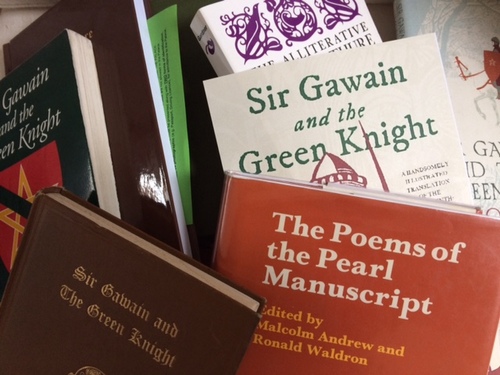 (Above: a selection of versions of the poem consulted - plus a sneaky peak of the cover of the new edition!)

Over the last seven days, I have been going through the first copy edit of the manuscript before returning it to Unbound. I was only in going through the copy editor’s comments and going back to my research that I realised just how much work has gone into the book – much more than I thought! So in this update and thought I would share with you what your support for the book has helped bring to a wider audience – and to give you a little insight into the depth of rigour involved in the journey.

Translating the poem itself…

The poem, of course, is the main part of the book and it has been through five iterations over the last few years before I felt it was ready. In translating it from the original I have used a number of different Middle English editions of the poem, including those by Tolkien, Gollancz, Barron (with facing prose translation) and the 1970s Pearl Manuscript edition by Andrew and Waldon.

When I wanted to query the original in the British Library, I also used my own copy of the Gollancz facsimile edition of the entire Cotton Nero A.x manuscript (which includes Sir Gawain and three other poems thought to be by the Gawain-poet). Using this, I could see exactly what the poet had written in his own hand if I wanted to be sure of a precise word.

In supporting the translation, I also used a number of different dictionaries of Middle English as well as modern editions of the poem including those by Armitage and Barron. Not forgetting that after all that, my translation not only had to read fluently but also capture the essential alliteration of the original plus ensure that its use of the distinctive “bob and wheel” device which finish each stanza worked as intended! But translation is one thing, interpreting the nuances of the poem is another… 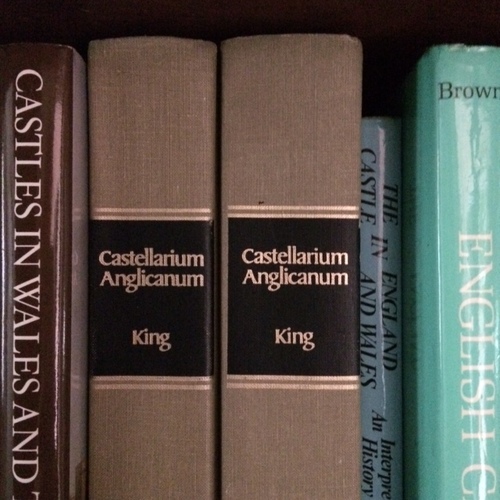 (Above: some of the books consulted about mediaeval architecture)

What do words mean? What is their etymology and their symbolism? What is being referred to in the poem (religion, saints, architecture, armour, Arthurian romance)? Where was the poem written and how do we know?

With each new stanza, the poem demanded more investigation; an holistic approach was crucial. I have conducted detailed research into the age of chivalry with books by leading historians such as Maurice Keen and Michael Prestwich. I’ve drawn on my extensive knowledge of castles and my library of castle books from historians such as R Allen Brown, OH Creighton and DJ Cathcart-King.

And I have researched general historical background, referring to works such as MJ Bennett’s fascinating assessment of late mediaeval society in Lancashire and Cheshire, as well as Nigel Saul’s wonderful and highly-readable biography of Richard II. I’ve also visited all the named sites referred to in the poem, including visiting the Staffordshire Roaches in search of the Green Chapel. 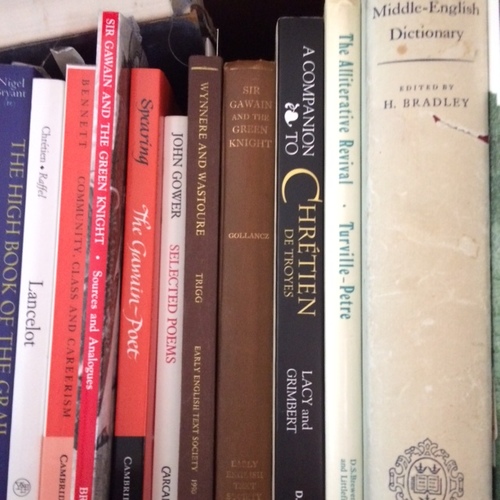 (Above: just some of the books used in interpreting the Gawain-poet and Midlde English)

One of the most interesting angles for anyone researching Sir Gawain concerns the Gawain-poet himself. Who was he? When and where was he writing? What messages was he trying to convey?

In attempting to answer these questions, I’ve not only used the background sources above but have also consulted leading works into the Gawain-poet such as by AC Spearing’s essential introduction to the poet as well Thorlac Turville-Petre’s fascinating assessment of the alliterative revival of the fourteenth century. A particularly interesting insight is that provided by Francis Ingledew which challenges readers to think of the poet – and the imagery he uses - in a new way altogether.

Finally of course, we come to the illustrations. In another of my updates I have provided more detailed insight into how I have researched the 16 linocut illustrations which illuminate the book (plus the image of the Green Knight which will now grace the back). Of course, my research for illuminated letters only needed to embrace the Gollancz facsimile edition – each of the nine illuminated letters in the original manuscript has been faithfully recreated in linocut by me on my long journey.

But I couldn’t have done without an extensive library of books in order for me to research the costumes, armour and environment of the main linocut illustrations. These are too numerous to mention but all of them have proved essential in helping me create historically accurate images appropriate to the life and times of the poet.

What you can look forward to…

My edition of Sir Gawain and the Green Knight is designed to appeal on a number of levels. You can simply just enjoy the poem in a brand new translation, supported throughout by my linocuts – it is a fantastic story with great pace.

Yet the poem in its historic environment is equally fascinating. I’ve also provided a detailed introduction to the poem which addresses the questions of the poet’s identity, his inspiration and also the contemporary political environment in which he was writing.

But there’s more too. I’ve included copious notes which explain the symbolism behind some of the poet’s words in addition to the references he makes.  There are also sections on arms and armour, the characters in the Arthurian canon, a chapter about the mysterious castle of Hautdesert and one about finding the Green Chapel, the home of the dreaded Green Knight himself.

In my work, I have hoped to share my enthusiasm not only for the Gawain-poet but also for the history of the middle ages. Whether you read just the poem or the whole book, I hope my work will inspire you and shed new light on the life and times of this unknown literary genius. I have written it as an mediaeval illuminated manuscript for the modern age; designed to be enjoyed and referred to again and again.

Now the book is being prepared for print it is no longer possible for supporters to have their name in the back but if you would like to receive your own copy of the deluxe collectors edition, you can still pledge now to be sure of a unique copy which will be different to those sold through the book trade.