Researching and creating the back cover image for Sir Gawain and the Green Knight.

Among the different pledge reward options for supporters of my new translation of Sir Gawain and the Green Knight are those which include an Artiists Guild quality giclee print of my linocut print of the Green Knight himself, the same image which will also feature on the back of the book. Here I give an insight into how the image was created - and how you might acquire a signed and numbered limited edition giclee print copy. 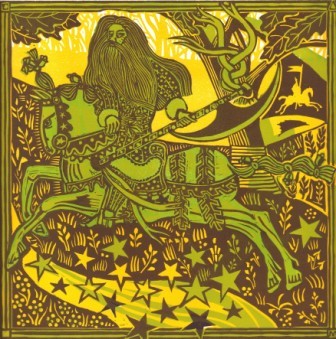 How is the Green Knight described?

We are introduced to the Green Knight in Fitt 1 (part 1) of the poem. When the knight enters the hall, the poet says this "most awful man" is "half giant in that hall I'd happen he were" and the "highest beyond measure of the men at that meal". We are told this not because the man is a giant - this would be unfeasible - but for poetic effect. He is of a size greater than all the others in King Arthur's court in order to create a miraculous appearance in the minds of those listening to the poem itself.

He is also distinguished by his colour, enker (entirely) green. This has contemporary significance as the colour of the underworld and also of the devil. His skin, hair, beard, clothes and even the blauner (ermine) of this hood are all the same colour, as is his horse. He bears in his hand a holly bough - which remains green even when the winter's woods are bare. He is, to a mediaeval listener, something truly from another - darker - world.

The poet gives us exquisite detail concerning the nature of the knight's clothing and that of his horse. He wears tight fitting hose and garments which hug his form in the latest style of the fourteenth century. He also wears a jacket trimmed with ermine at cuff, hem and round his hood. His mighty axe - described initially as a guisarme (what we might understand as perhaps resembling a later bardische) - has an enormous blade which nearly touches the handle at one end. The saddle, caparison and fittings of the horse are all exquisitely described by the poet to create an impression of a man who, though dangerous, is also courtly and dressed in the latest fine style. 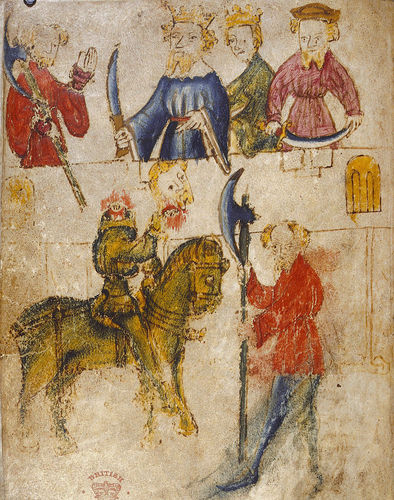 The description given of the Green Knight's appearance is precise and meticulous; the poet wants us to see him as contemporary with his late fourteenth century audience. So in producing this linocut image, I am drawn myself to contemporary illuminated manuscripts of the period. What I have found by my research is that the late fourteenth century had a distinct sartorial quality all of its own; all of these cues and references I have borrowed for the illustrations which accompany my translation.

In terms of the Green Knight himself, I have based his gown on those of nobles and kings shown in contemporary French and English documents. His guisarme is borrowed from that shown in the original illustrations in Cotton Nero A.x in the British Library (see above). The horse trappings I have taken from many varied illuminations of the period to ensure that the appearance is contemporary and correct.

Finally, I like to base my work on the slightly "amateurish" illustration style of mediaeval scribes: men appear out of proportion with themselves and sit strangely on their mounts. It is worth saying that the illustrations accompanying the original manuscript are of a particularly poor quality and not the work of a professional illuminator; notwithstanding, in their depiction of everything from the shoes and doublets worn to the open crown of the king, they resolutely assert the period in which the poem was written.

The setting for my image borrows heavily from fourteenth century hunting manuals and rural depictions - but with a little bit of Bawden and Ravillious thrown in to add a touch of contemporary inspiration. The stars are intended to represent the sparks flying from the horses hooves; stars their own role to play in the poem too - particularly in Fitt 2, when we are told about Gawain's own five points of virtue as emphasised by the star on his shield. 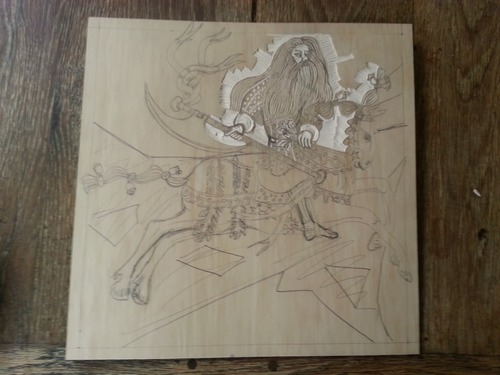 The creation of the linocut plates for my final image, to quote from Adrian Belew, took hours and hours.The image is made from three different plates for each of the colours used; all cut by hand meticulously so that the "un-inked" parts do not catch any ink at all. Below I am inking up the yellow plate: 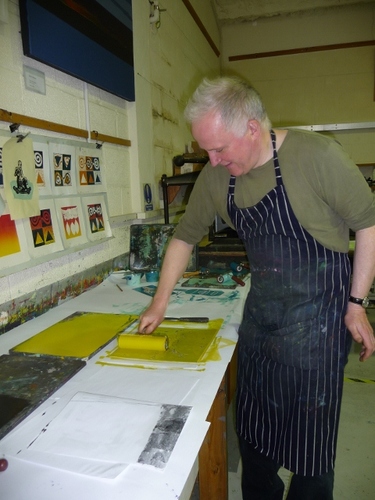 Each plate then has to be meticulously registered to ensure that all the colours fall in the right place when each inked plate is pressed. One slip or loss of concentration will ruin the final print. As can be seen from the image below, once I am pulling the print on the Albion press, there is no going back - you simply will not see what has happened until you have removed the print from the press. 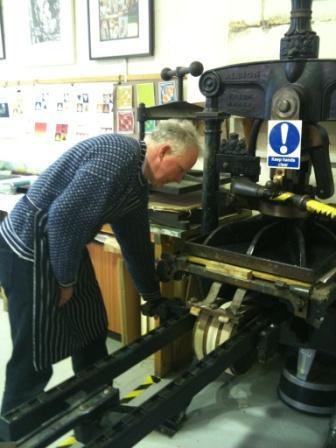 Winding the print into the Albion press, a wonderful 19th Century printing press

The final print - the Green Knight comes alive again for the 21st Century!

​The result of a day at the printing press, hopefully, is a series of images which make it to edition status. Editioned prints are carefully examined for errors and registration before finally being signed and numbered by the artist - in this case me! 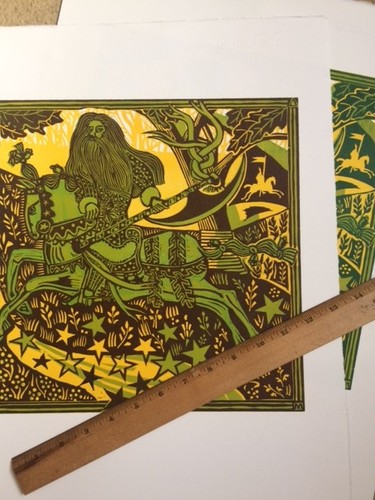 The result of all this work is, hopefully, a delightful image. In this case the Green Knight appears in three colours which serve to blend with each other: yellow, blue and aubergine. That's right! No green - I do all my print-making using the wet-on-wet method to create new colours from those I am using. 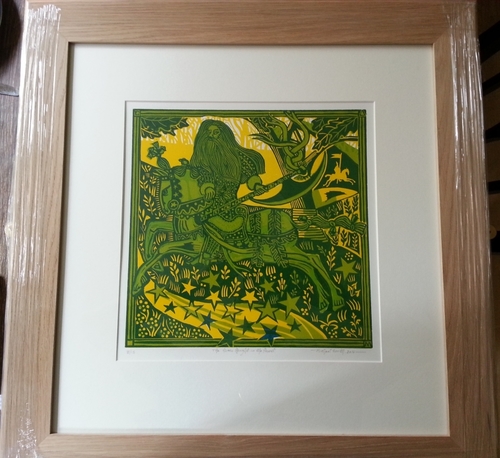 Pre-order your Collectors Edition of the Book!

​My new translation of Sir Gawain and the Green Knight publishes in July. If you've not yet pre-ordered your copy and would like one of the Collectors editions (different to those sold in the bookshops or Amazon) the please pledge for a copy (press the blue pledge button and follow the instructions).

Unlike the trade edition, the collectors limited first edition inlcudes:

Here's what the book will look like (and it will feature the Green Knight print on the back cover too!):