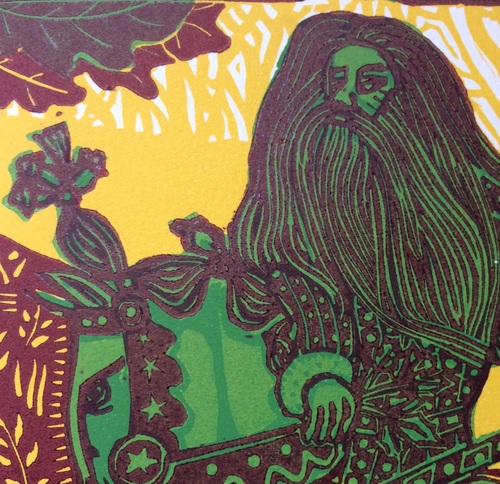 How wonderful it was to learn last week that Sir Gawain had managed to achieve 100% funding. I want to thank everyone who has pledged to help make this new translation of Sir Gawain and the Green Knight a reality - I could not have done this without you. But the story's not over yet - this is where the real hard work begins!

Since I began work on the translation way back in 2013, I have made countless revisions as I have uncovered new background information behind the poem and new ways to express the story. Now the challenge is to go over things one last time to ensure the flow and metre of the poem is maximised while at the same time preserving the alliteration of the poem as accurately as possible to reflect the original Middle-English.

I am currently two-thirds the way through the final revisions before sending the manuscript off to Unbound but the book is not just the poem itself. Before I send it off, I am also reviewing all the supporting notes which will give readers an understanding of some of the themes which lie behind the poem (including where the Gawain Poet alludes to contemporary events or to goegraphy or social/religious events).

After this, I have also provided a glossary of many of the words used by the poet which, even in their translated form, might not be obvious to a reader unfamiliar with fourteenth century history. So I'll be going through that to ensure it all makes sense too!

One of the great attractions of this poem is that we don't know who originally wrote it, or why. The book will not only feature the poem in all its majesty but will also contain a wealth of information to help readers unravel some of its secrets.

In this regard, I will highlight some clues given in the manuscript as to where the poem was written, why it might have been written and whether it has some greater allegorical meaning. I believe there are some fascinating elements hidden in Sir Gawain and the Green Knight which allude to much darker contemporary events, so there is still some work to do to finesse this part too.

Not forgetting the linocuts! 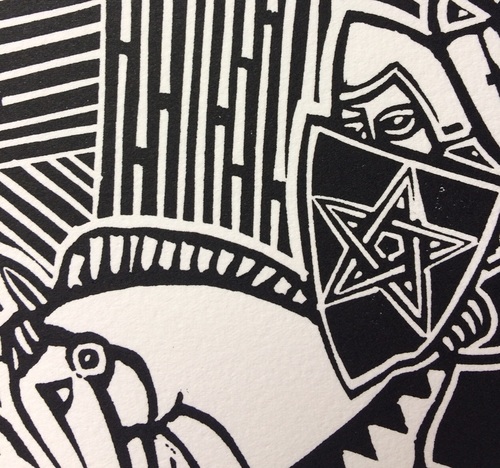 Finally, of course, there are all the illustrations. As you've seen from my previous updates, I've been busy cutting and printing a raft of linocut images for the book. I thought I'd done this a while back but as we've approached full funding I've wanted to go further so in the last few weeks I've been busy making new prints which I hope you will enjoy as you read the book.

My style of printmaking is a cross between the naive style of 1950s cutting and the slightly disjointed style of mediaeval illuminators. Irrespective of the technique, each of the images is based on meticulous research of fourteenth century fashion and armour so I hope the images will not only be an attractive addition to this particular telling but will also help to place it within the period it is set.

Again, thank you all for your help in bringing Sir Gawain and the Green Knight to a new audience. While the book is now fully funded, pledges can still be made - including for signed and dedicated editions. If you know of others who would like a copy of the special "pledge" editions (in effect a collector's edition which will be different to those sold in the shops), please do let them know. Of course, everyone who pledges also gets a mention in the book as well. Not forgetting that you can also upgrade your own pledge to other pledge levels if you wish.