New Year arrives for Sir Gawain – but what message does it bring?

New Year is a time when we all try to change our ways and perhaps seek a greater virtue in the year ahead. Yet for Sir Gawain on his quest, New Year is a time of dread and foreboding. What was the poet’s real intention? 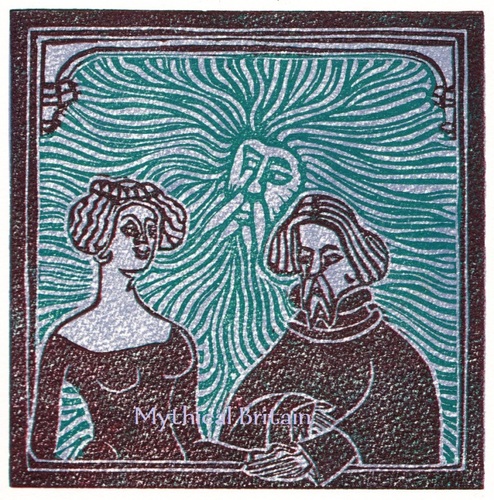 Image: Temptation and renewal for Sir Gawain at new year?

In setting his poem in the holidays of Christmas and New Year, the Gawain-poet knew exactly what he was doing when he puffs up his audience with the vanity of winter partying before schyndering (shattering into splinters) the bones of its vacuity in a Christmas game gone horribly wrong. When the Green Knight is still alive after being beheaded by Gawain, the poet puts us right into our hero’s mind, full of self-doubt. He brings us all right down to earth – just like the Green Knight’s rolling head – by placing us and our conceits right on the spot and any festive celebrations far, far away:

Of the danger you can’t command

From this adventure so obtained

That you have taken in hand.

The Gawain-poet places us now at a key moment in the story. The Green Knight laid down his challenge at the turning of the year and, in keeping with the way of such stories, tells Gawain (also referred to as Gawan and Wawan in the original manuscript) to seek him in lands unknown to meet with him again on New Year’s Day in twelve months’ time.

The importance of timeframe

The creation of this timeframe for the quest is critical because this enables the writer to draw the reader ever more into the uncertainty of the hero. What should be a new year of joy and transition is now one of despair and uncertainty. The reader seeks resolution; the poet knows this and plays with us mercilessly.

So it is in a year’s time, after Gawain has been on a terrifying journey and been royally entertained in the warm bosom of Hautdesert, that we are now placed again at the mercy of the poet. During his time at Bertilak’s castle, he has also enmeshed our hero in further uncertainty in terms of the hidden gift of the girdle, given to him by the lady to create even greater danger for Gawain. He is in a place of deep uncertainty, his faith almost crushed by the workings of strange, Fiendish, forces.

Gawain, it seems, has betrayed both Bertilak and his own faith in denying the girdle’s existence in helping him overcome the Green Knight. We know he has lied yet, strangely, we also want him to succeed in his quest. We too are troubled in our conscience. We feel this way because the poet has put us there. And now the snow falls outside, its icy grip seemingly foretelling Gawain’s doom:

Now nears the New Year and the night passes,

The day drives back the dark as our Dear Lord bids.

But wild winter storms out there were awake,

With nigh enough of the north to tan naked skin;

The snow was shed snipping, that snapped at the wildlife;

The whistling winds whipped from the heights,

And drove each dale full of great deep drifts.

Our lord listened full well, that lies in his bed,

Though he locks his lids, he sleeps but little;

By each cock that crowed he knew well his fate neared...

There is no ticking clock, but the poet invents one in the form of the cock as it crows relentlessly with each hour that passes. Gawain cannot sleep despite his clasp-shut eyes; he knows his new year will not be blessed with renewal and rejuvenation but will end, in only a few hours, in his death. The suspense mounts. And yet…

A metaphorical baptism in Staffordshire

For contemporary audiences, renewal has a religious significance because New Year’s Day is the Feast of the Circumcision of Christ; when the first blood of Christ was shed and thus beginning the process of the redemption of mankind. This is crucial to an interpretation of Gawain which might otherwise be lost – a metaphorical baptism in the hilly wastes of Staffordshire when Gawain becomes the symbol of change among a court corrupted by what the Gawain-poet calls its surquedry (overweening pride).

While we in today’s world might consider the suspense too awful to bear, we should perhaps see Gawain as his intended audience may have viewed him: a flawed penitent drawn ever nearer to the purging of his soul. Instead of ghoulish destruction, we are made to see Gawain’s tryst with the Green Knight as one of pilgrimage combined with spiritual and metaphorical renaissance. He is almost a Christ figure – or, having been placed by the poet in our minds, perhaps the figure of Christ within us.

Gawain, whose childlike blood is indeed shed (albeit in a small way) on the purity of the white snow, emerges a humbled man, not a surviving hero. He was vain, flirtatious and weak yet, while he emerges shamed he is in fact made stronger in his sense of religious duty. He still carries his shame but he seeks redemption.

For him there is no fairy tale ending when he returns to Camelot; indeed, he asserts his shame while all of Arthur’s court would rather see his trial as some great adventure which reflects well on them.

The Gawain-poet is asking of us all that we too reject the pursuit of vanity and seek a purer sense of who we are and why we are here. Gawain learned his lesson yet it seems that Camelot did not.

As the great poem comes to its end, we are made to wonder which New Year we should choose as we seek our fresh horizons - a greater spiritual integrity or a deeper secular delusion?

This forthcoming translation of Sir Gawain and the Green Knight has only been possible thanks to the generosity of everyone who has pledged support to enable its publication. Now the book is being prepared for print it is no longer possible for supporters to have their name in the back but if you would like to receive your own copy of the deluxe collectors edition, you can still pledge now to be sure of a unique copy which will be different to those sold through the book trade.