Is there a secret message buried in Gawain and the Green Knight?

One of the strange features of Sir Gawain and the Green Knight is the set of nine crudely drawn illuminated letters which the poet originally produced to accompany his work. Do they constitute a hidden message?

Is there some form of invocation contained in the Gawain manuscript? 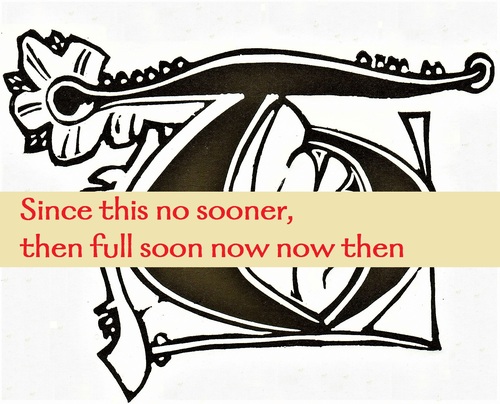 There is a main letter for each of the four fitts (parts) and another five elsewhere in the poem (each of which, incidentally, I have recreated in linocut to appear in the new edition - and in the approprate place in the manuscript).

While the inclusion of illuminated letters at the beginning of each part makes artistic sense, it is the random selection of other letters which occur occasionally in the manuscript which make us look again. The complete list of letters is as follows:

We can construct a curious sentence as follows:

Since this no sooner, then full soon now now then.

Is this a strange invocation, a request for an uprising? If it doesn’t happen now then it must happen soon? What is being asked here and why? Is the reader being challenged to act against authority? Does Sir Gawain and the Green Knight hide a secret message within its own Enigma code?

Sadly (for the conspiracy theorist at least), the answer is no! In actual fact, each of the nine letters signifies a distinct section of the poem as it shifts in plot and location - but it's nice to think that maybe the anonymous poet had some other point in mind!

The actual purpose of these letters is covered in a later update. The gif below shows how my book is laid out; you can see one of the letters in situ. All part of this wonderful new edition - which pledgers receive in a deluxe form, different to those sold later in the bookshops.