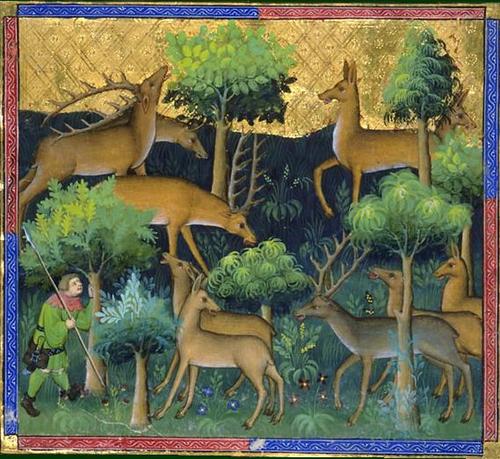 A common technique employed by the Gawain Poet - and others in the Alliterative Revival of the fourteenth century - is the use of descriptions of bucolic idylls as a contrast to horror to create astonishing tension. In Sir Gawain and the Green Knight, we are introduced to a range of different uses of this technique - a range which makes him a master of the art. Let's take a look...

We first encounter nature in the poem after we have witnessed the marvel of the Green Knight's decapitation and are asked to reflect on the deed done by Gawain in the hall at Camelot. The poet, changing the tempo and feel of the poem, introduces us to Fitt 2 with a soothing and wonderful description of the passing of the seasons. I particularly like his description of summer passing into Autumn (which is a conitnuation from the previous stanza describing the build up to Summer):

After, the season of summer with its soft winds,

When Zephyrus himself blows on seeds and herbs,

The growth is well joyful that waxes without,

And wet dripping dew drops from the leaves,

But then comes high harvest and hardens them soon,

Warning them of the winter so to wax full ripe;

He dries with the drought and makes the dust rise,

From the face of the fields to fly full high;

Wrathful winds in the welkin wrestle with the sun,

Leaves loosen from lindens and alight on the ground...

The poet does this here for two reasons, the first of which relates to the plot: Gawain agrees to meet the Knight of the Green Chapel a year from the day that he visits Camelot. Consequently, the poet shares with us the slow winding of the seasons with all their merry traits in order to foreshorten the story in the way a painter does to draw the eye to the subject. The secondary, but no less signficant reason, is to lift the reader's spirits before he skilfullly darkens the mood in preparation for Gawain's dangerous journey on All Soul's Day.

And all grey is the grass that once was so green ...
... And winter wends again, as the world grows
in age,
Till Michaelmas moon
Was come with winter wage.
Then thinks Gawain full soon
Of his most anxious voyage.

Yet the skill of the Gawain-poet is also to twist this technique; to startle us not simply with summer scenes followed by darkness but also to show nature itself as a consipirator in the horror itself. On his journey to Hautdesert for example, nature is shown as more deadly than any foe in the hills:

Yet war worried him little for winter was worse,
When the cold, clear water was shed from the clouds,
And falls freezing where it might to the fading earth.

Now let him long there and let love embrace him!
Still out on the land the lord leads his men.
He has flushed out the fox that he has long followed;
As he sprung through a spinney to espy that rascal,
There he hears those hounds that harassed him swiftly,
And Raynard comes rushing fast through some rough growth,
With all that rabble in a race and right at his heels.

Finally, in Fitt 4, the weather has changed for immense dramatic effect as the snow and ice hurl around in setting the scene for Gawain's meeting with the Green Knight. The weather has now become the poet's co-conspirator for this most dramatic of endings, in preparing us for Gawain's chilling fate:

Now nears the New Year and the night passes,
The dawn drives back the dark as the Lord commands.
But wild winter storms out there were awake;
Clouds cast the cold keenly to earth,
With nigh enough of the north to tan naked skin.

Of course, the technique of contrasting nature with ensuing horror, or indeed to create a natural pause in elements of the story, is not unusual. It is a key part of the narrative, enabling the reader perhaps to pause or, in the case of a live performance, to provide a break between elements of the poem.

We see this in King Arthur's Death (the Alliterative Morte Arthure, which I am currently working on for Unbound; do please pledge if you would like to), for example where the poet employs nature a calming paradise, strikingly and deliberately in contrast to the King's ascent to face the horrific child-guzzling, rapist giant who looms at the top of Mont Saint Michel:

... With flash of feather did fly many birds,

And there called the cuckoo clear from the groves;

With all kinds of rapture they pleased themselves;

Sweet was the note as sung by the nightingales...

By contrast, In the Parlement of the Three Ages, another poem of the Revival, all the action throughout the poem takes place in the woods; here the woodland is itself like a mist of melancholy (not unlike the valley of the Fisher King in Chretien's Grail masterpiece, Perceval), bearing silent witness to that most dreadful realisation that all life is ultimately short and largely unfulfilled without due care.

​Reflecting on this method, we might consider that the Gawain-poet is not unusual in this regard. However, where he does differ is in his use of nature for conventional and unusual tableaus, creating an uneasy sense of ambiguity as we try to understand Gawain's - and indeed the poet's - morality. His mastery of tension and his adoption of the technique to twist our mind and unsettle our thinking is truly astonishing.

​In Sir Gawain and the Green Knight, the anonymous Gawain-poet showed himself to be a master wordsmith of the English language. We are in awe of him.

​More from me on the Alliterative Revival!

My translation of Sir Gawain and the Green Knight has now been published and, though the collector's edition is no longer available via Unbound, the hardback edition is available through all good bookshops and online. If you would actually like a copy of the de luxe collector's edition, which I will sign and personally dedicate to you, I still have a few for sale here.

In the meantime, I am now working on King Arthur's Death, widely regarded as second only to Gawain in all the poems of the Alliterative Revival. If you would like to help this new translation become reality too - receiving a de luxe collector's edition and having your name in the back of every copy sold - I would indeed be honoured. To help my latest illustrated translation to become reality, please click here.