How pure is Sir Gawain? The role of the five-pointed star in Gawain and the Green Knight 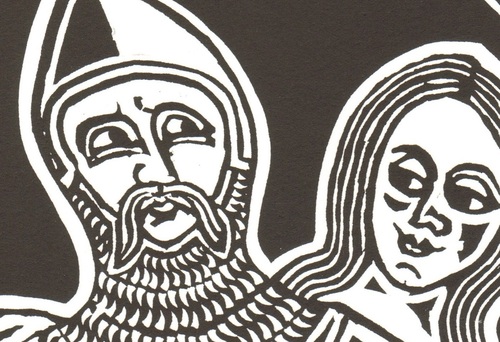 Before Sir Gawain sets off on his quest to find the Green Knight, he prepares dutifully for his journey, being ritually armed on a carpet of the finest Toulouse tapestry. It is here that we are introduced to his emblem – the five pointed star –which would mean much to the mediaeval reader, and which serves to explain Gawain’s seeming fall from grace as the poem progresses.

A crucial component of the poem

Before we look at the star itself, it is worth reflecting on its description and inclusion at this point. JA Burrow (A Reading of Sir Gawain and the Green Knight, London 1965) suggests it forms part of a somewhat disjointed Fitt (part) 2 of the poem whereby the Gawain-poet seeks to introduce a number of crucial themes into his story early on in order to make the remainder of the poem more efficient. The poet tells us,

(It is a sign that Solomon set some while back

In betokening of truth, by title that it has…)

Andrew and Waldon (The Poems of the Pearl Manuscript, London 1978) tell us that “In the Middle Ages, the idea developed that Solomon’s magic seal bore a six-pointed star made of two interlaced triangles; in course of time, this became identified with the five-pointed star … which was used by Pythagoreans and other sects as a symbol of health and perfection. In Christian eyes it was associated with black magic, but was sometimes made symbolic, instead, of the name Jesus or Maria (each of five letters), or of the five wounds of Christ.”

With this in mind, we can begin to understand the significance of the star as the Gawain-poet describes it. He sees it as emblematic of what he calls “trawƥe”, crudely “truth”, or more definitively, a state of godly perfection, integrity and honour. It is, it seems, an impregnable, interlocking form definitive of a knight impervious to damage. The “title” – the very nature - of the emblem is trawƥe; fully-balanced human perfection. As the poet says,

This correctly accords to this knight and his arms;

For he is faithful in five ways and in those five again,

Voided of all villainy and with virtue adorned

He bore in shield and coat,

Did talk of this lord true

And the gentlest knight of note.

He then goes on to talk of the five wounds of Christ and the five joys that Mary had in her son before telling us,

A further five virtues I find in that fellow

Were friendship and fellowship foregoing all things,

His chastity and courtesy beyond reproach,

And pity surpassing all others, these pure five

Were harder hafted to him than to any other.

So it is, in these two stanzas which describe his heraldic device, that the Gawain-poet introduces us to a hero who is almost saintly and impervious to sin; someone who cares for others and assists anyone who is deserving of pity and compassion. His audience at this point would see him as a knight most virtuous and almost the apogee of the chivalric ideal. And yet…

Purity at odds with reality

We know from Fitt 1 that the Gawain we meet here, and indeed the rest of Arthur’s court, seems at odds with this description. Arthur is almost semi-indolent and demands adventure. The court, while attending Mass, notwithstanding knows how to have a good time. Gawain himself is impetuous and is quite happy to sever the head of the ghoulish Green Knight. Warfare and pleasure, it seems, can quite happily coexist alongside the service of God.

So, while we are asked to see Gawain as some form of chivalric apogee in the wearing of the star, we nonetheless sense an element of incongruity with how he is being prepared and what we know of him from Fitt 1. In many ways, the star might be seen as a crude indicator of Gawain’s weakness because it asks the reader to accept something which has already been shown not to be entirely the case.

We cannot dismiss Gawain’s motives and religious fervour however. We know he is devout (as is shown when he seeks a harbour to celebrate Christmas on his journey later in Fitt 2). We are shown too that he calls on Mary to protect him from the wiles of Lady Bertilak. Yet we are also shown a curious opposite too: he is an exponent of “luf-talking”, which might almost be viewed as seduction without sex. He is not afraid to dally with women – indeed his reputation is well known – yet as the same time he knows when to hold back (for which the Lady, quite rightly, scolds him).

An emblem of life's struggle?

So what did the Gawain-poet intend when he gave his hero the five-pointed star as his emblem? It would appear that its main aim is chivalric yet it also exists in the poem crucially as an indicator of downfall. While it would be a mistake to see the five pointed start as indicative of black magic (even if we see dark arts being revealed in Fitt 4), its role in the story is almost suggestive of a leading theme of the poem itself: chivalry and knightly behaviour is at best an unresolved conflict between religious ideal, feudal reality and human frailty. 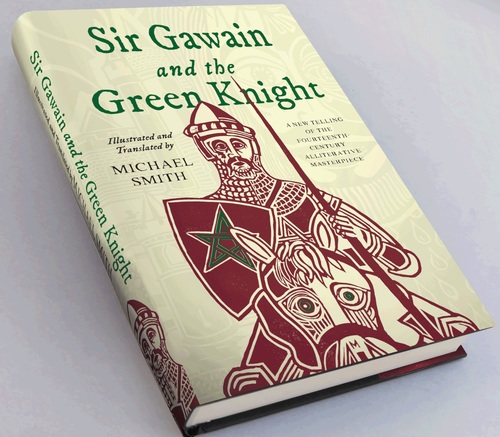 This forthcoming translation of Sir Gawain and the Green Knight has only been possible thanks to the generosity of everyone who has pledged support to enable its publication. Now the book is being prepared for print it is no longer possible for supporters to have their name in the back but if you would like to receive your own copy of the deluxe collectors edition, you can still pledge now to be sure of a unique copy which will be different to those sold through the book trade.